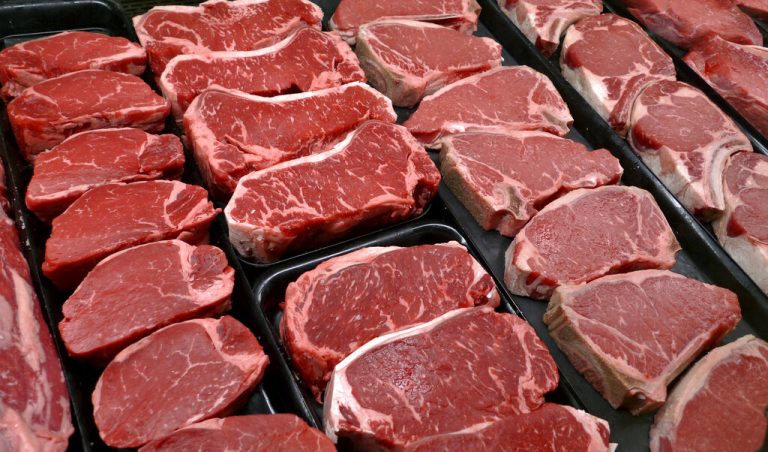 The news was wrong — Biden is planning no such thing — but it was hardly the first time the right has recognized the political power of a juicy steak. Republican politicians in recent months have increasingly used food — especially beef — as a cudgel in a culture war, accusing climate-minded Democrats of trying to change Americans’ diets and, therefore, their lives.

“That is a direct attack on our way of life here in Nebraska,” Gov. Pete Ricketts, a Republican, said recently.

The pitched rhetoric is likely a sign of the future. As more Americans acknowledge the link between food production and climate change, food choices are likely to become increasingly political. Already, in farm states, meat eating has joined abortion, gun control and transgender rights as an issue that quickly sends partisans to their corners.

“On the right, they are just going for the easiest applause line, which is accusing the left of declaring war on meat. And it’s a pretty good applause line,” said Mike Murphy, a Republican consultant. “It’s politically effective, if intellectually dishonest.”

Ricketts was among the first to seize on the issue in recent months. In March, the governor — whose state generated $12 billion from livestock and meat products last year — slammed his Colorado counterpart, Democratic Gov. Jared Polis, for suggesting Coloradans lay off the red meat one day as a way of cutting back on greenhouse gas emissions.

In her weekly column a few weeks later, Republican Sen. Joni Ernst of Iowa blasted “everyone from out-of-touch politicians to Hollywood elites” as leading the left’s “war on meat.”

But the issue blew up last week after a Daily Mail news story — debunked within 24 hours — suggested the Biden administration could ration how much red meat Americans can consume as part of its goal to slash greenhouse gas pollution.

While the story was false, there’s little doubt the livestock industry is a contributor to climate change.

A 2019 Environmental Protection Agency report noted agriculture was responsible for 10% of all greenhouse gas emissions, a quarter of which is emitted by livestock before they are butchered.

There are signs that Americans may be adjusting their diets out of concern for climate change. About a quarter of Americans reported eating less meat than they had a year earlier, according to a 2019 Gallup poll, chiefly for health reasons but also out of environmental concerns. About 30% of Democrats polled said they were eating less meat, compared to 12% of Republicans.

For some, it’s hard to imagine Americans abandoning beef and easy to see its power as a political symbol, said Chad Hart, an Iowa State University agriculture economist.

Americans don’t get overly sentimental about barns crammed with chickens or thousands of hogs, but few images are as quintessentially American as cattle grazing over rolling hills.

“When you think about American food, beef is what is in the center of that plate,” Hart said. “And that’s likely to remain a national identity when it comes to what an American food plate looks like.”

To be sure, food isn’t new to culture war politics.

As a presidential candidate in 2007, Barack Obama was accused of food elitism when he asked a group of Iowa farmers whether they had seen the price of arugula at Whole Foods, an upscale grocery chain that had not yet made it to Iowa. Obama still won the state’s caucuses.

Even more famously, Democratic presidential candidate Michael Dukakis was pilloried by Republicans as far out of touch with rural America in the midst of the 1980s farm crisis when he suggested Iowa farmers consider diversifying crops by planting Belgian endive.

That prompted GOP vice presidential nominee Dan Quayle to hold up a head of endive, a green used in salads, to show a crowd in Omaha “just how the man from Massachusetts thinks he can rebuild the farm economy.”

In the past, food was a way of painting Democrats as out of touch with rural America. Today, the message is about climate and the economy.

There is a growing movement to discourage meat-eating and a massive market for meat replacement foods. The Green New Deal, a sweeping environmental outline championed by liberal New York Rep. Alexandria Ocasio-Cortez, calls for a sharp reduction in livestock production.

Biden has called the plan an “important framework” but has not endorsed it.

As these policies remain only plans for now, Republicans complaining about them have offered little substance with their claims of a war on meat.

Still, Republicans have looked for ways to signal which side they’re on. In April, Ernst introduced a bill that would bar federal agencies from setting policies that ban serving meat to employees.

Ricketts declared “Meat on the Menu Day” in March and came back Wednesday to name all of May “Beef Month.”

These efforts do little to address the beef industry’s substantial problems, including a backlog in slaughterhouses stemming from the pandemic, drought and the high cost of feed.

And a spokesperson for the National Cattlemen’s Beef Association kept her distance from the food fight.

“When emotions and rhetoric run high on either side of the political aisle, NCBA remains focused on achieving lasting results,” said spokesperson Sigrid Johannes.

This story has been corrected to show that Quayle was vice presidential nominee, not vice president, when he joked about Dukakis’ endive remark.

PrevPreviousThis May, the Y Encourages Older Adults to “Engage at Every Age”
NextStefanik’s political evolution mirrors story of today’s GOPNext