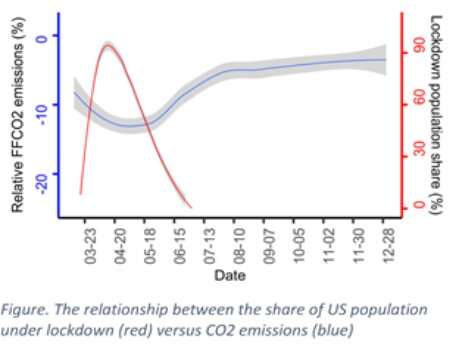 The COVID-19 pandemic has altered energy use and greenhouse gas (GHG) emissions globally and continues to influence emissions as the response to COVID-19 evolves. Reliable data that can provide a real-time update of emissions has been difficult to acquire and emissions estimates, thus far, have relied on indirect or “proxy” metrics.

Now, professor Kevin Gurney of Northern Arizona University’s School of Informatics, Computing, and Cyber Systems and colleagues have built a real-time estimate of U.S. carbon dioxide (CO2) emissions based on direct fuel consumption data with detail on individual fuels and economic sectors. As described in their report, Gurney and his collaborators have found that previous estimates of the decline in U.S. GHG emissions during the peak of the COVID-19 lockdown period, based on global efforts with indirect proxy approaches, were severely underestimated.

Gurney, who specializes in atmospheric science, ecology and climate policy, has spent the past two decades developing a standardized system for quantifying greenhouse gas emissions under his Vulcan Project and Hestia Project. The extension of these efforts into real-time results, called Vulcan-NRT, was supported by a grant from the National Oceanic and Atmospheric Administration (NOAA) and relied on weekly fuel consumption data archived by the U.S. Department of Energy.

The team found that the weekly total U.S. CO2 emissions reached a maximum decline of -19.4 percent during the week ending April 3, 2020, consistent with the initiation of state-scale COVID-19 lockdown orders. The total CO2 emissions decline for the sum of April and May, the two-month period with the largest persistent decline, was -15.7 percent.

This was in stark contrast with two recent global studies that included explicit estimates for the U.S. “The Global Carbon Project estimated that the U.S. experienced declines in GHG emissions of -3.9 percent between January and April of 2020,” Gurney said. “By contrast, our data-driven approach shows a decline three times more severe at -11.3 percent for the same time period.”

A second recent global estimate from Carbon Monitor had a similar estimate of the total U.S. decline during the first half of 2020, but the estimated decline for individual sectors, such as power plants, differed from the Gurney team results by roughly two times.

“The use of indirect or proxy measures, such as traffic congestion indices, appear to be less accurate than direct fuel data,” said NAU postdoctoral scholar Bhaskar Mitra, a co-author of the study. “We need the most accurate assessments of greenhouse gas emissions achievable in order to use this real-time information to course-correct policy as we take on reduction targets this decade.”

On April 22, President Joe Biden announced a new target for the U.S. to achieve a 50-52 percent reduction from 2005 levels in economy-wide net greenhouse gas pollution in 2030. Gurney and his team agreed that reaching the target reduction pledged by the Biden Administration will be challenging. “A reduction of 50 percent below 2005 levels by the end of this decade would require a reduction three times what the U.S. experienced from the COVID-19 lockdown in 2020,” Gurney said. “However, the emissions declines during the lockdown may provide insight into how different sectors respond to changes in the way we live and consume.”

Among the sectors of the U.S. economy, gasoline-fueled vehicles, airplane travel and electricity consumption accounted for 85 percent of the April-May 2020 decline.

NAU postdoctoral scholar Geoffrey Roest, a co-author of the study, said, “Not surprisingly, building heating and commercial surface transportation (trucks, ship and rail) showed little decline, no doubt due to the need to work from home and increased home delivery of goods and services.”

In addition to Gurney, Mitra and Roest, NAU postdoctoral scholars Pawlok Dass and Yang Song as well as graduate student Taha Moiz co-authored the study. Data from Vulcan-NRT project are available on the Gurney team’s Vulcan-NRT website, including access to interactive graphics, methods and data downloads. A video describing the parent Vulcan Project is available online. This research was supported by the National Oceanic and Atmospheric Administration grant NA19OAR4310167 and the Arizona Technology and Research Initiative Fund (TRIF).

Gurney joined NAU in 2018, where he is continuing the research begun at Purdue and Arizona State University. He has been involved with the United Nations Climate Change Framework Convention and the Kyoto Protocol for 25 years and is a lead author for the Intergovernmental Panel on Climate Change (IPCC). In addition to his interests in carbon cycle science and policy, he has worked on stratospheric ozone depletion, radionuclide dose assessment, energy systems and climate-economic modeling.