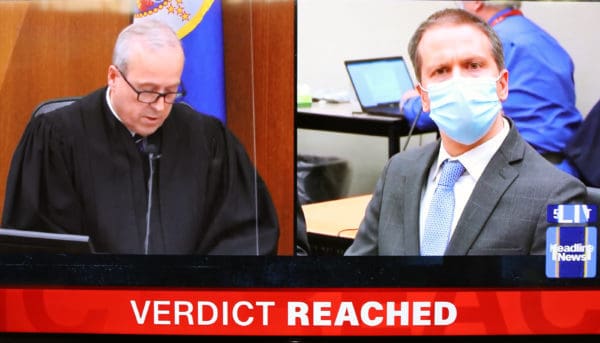 Mr. Chauvin’s defense lawyer, Eric Nelson, filed a motion on May 4 that said the court “abused its discretion” by:

Mr. Nelson’s motion also accused the State of prosecutorial misconduct for “disparaging the Defense.” On the last day of the trial, Prosecutor Jerry Blackwell accused the defense of “making up stories” several times.

The motion also said that the extreme publicity not only prejudiced this jury but may have a “far-reaching chilling effect on defendants’ ability to procure expert witnesses.” A group of people dressed in black vandalized the former home of Barry Brodd, a use of force expert who testified for Mr. Chauvin. The vandals splattered blood on the front door and garage, and left a pig’s head on the porch. The motion suggested that Mr. Chauvin’s co-defendants, former MPD officers Tou Thao, Thomas Lane, and J. Alexander Kueng, may not be able to find expert witnesses for their defense.

“The publicity here was so pervasive and so prejudicial before and during this trial,” Mr. Nelson wrote, “That it amounted to a structural defect in the proceedings.”

Mr. Nelson requested a hearing to dispute the verdict of the trial, on the grounds that “the jury committed misconduct, felt threatened or intimidated, felt race-based pressure during the proceedings, and/or failed to adhere to instructions during deliberations.”

The motion contained no details of the alleged jury misconduct, but during the trial, Judge Peter Cahill ruled that there had not been misconduct. The alleged misconduct has been kept secret.

Another recent development is a photo of juror Brandon Mitchell that has been on social media. Mr. Mitchell, a black man in his 30s, was photographed last August at a march in Washington DC wearing a T-shirt that encircles the face of Martin Luther King Jr. with the words “GET YOUR KNEE OFF OUR NECKS,” and “BLM.” He was also wearing a “black lives matter” cap.

During jury selection, Mr. Mitchell had been given a questionnaire to fill out with two questions about BLM protests. The first asked, “Did you, or someone close to you, participate in any of the demonstrations or marches against police brutality that took place in Minneapolis after George Floyd’s death?” The second was, “Other than what you have already described above, have you, or anyone close to you, participated in protests about police use of force or police brutality?”

Mr. Mitchell answered “No” to both questions. Under direct questioning, he said that he had a “very favorable” opinion of Black Lives Matter, but that he did not consider it to be either an organization or a movement. He defined BLM as “a statement.”

In a recent interview with the Star Tribune, Mr. Mitchell claimed that he did not remember owning or wearing the BLM shirt, and said that the event he wore it at was “100 percent not” a march for George Floyd. Although the march was held on the 57th anniversary of Martin Luther King’s “I Have a Dream” speech, Al Sharpton was one of the organizers, and it was called the Get Your Knee Off Our Necks! Rally. Floyd’s brother and sister were speakers, as were family members of others who have been shot by police.

The formal motion does not mention Mr. Mitchell, nor does it refer to Congresswoman Maxine Waters’s scarcely veiled call for riots if the jury failed to convict Mr. Chauvin. It is common for motions of this kind not to include particulars of this kind. The appeal is only four double-spaced pages, and details will be argued later.

The sentencing hearing is scheduled for June 25th.