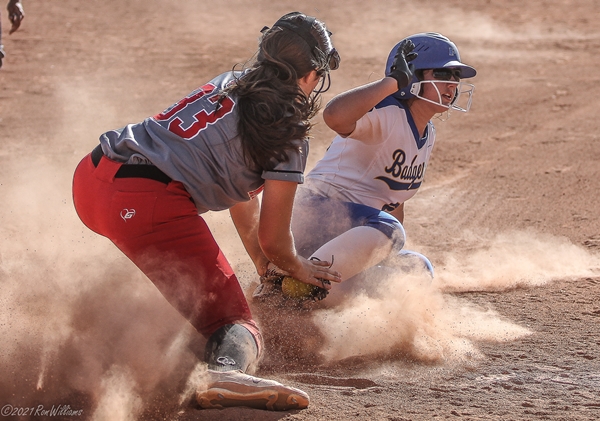 Photo: 22 Leigha Walker slides into third ahead of the tag by Marissa Vocca of Mingus

RJ Parra smacked a bases clearing triple to conclude a four run seventh inning rally and a thrilling 8-7 win over the #4 Mingus Marauders, on Senior Day at Prescott High School. The win will surely help the Badgers as they attempt to secure a home playoff game next week.

The freshmen seems to thrive in the late innings with some big hits throughout the season. “I don’t think about as me trying to do something, but as a team effort. We have worked very hard and really wanted this win and we just refuse to quit. And you saw that today,” said Parra, who finished with five RBIs on the day..

Things did not start off well at all for the Badgers, as Mingus tallied four runs to start the game, thanks in part to a tough start defensively off of starting pitcher Eliza Legge. Trailing 4-0, Prescott put together a couple of innings with a runner at third, but Mingus pitcher Alexis Ayersman was able to get the big outs to keep the home team off the board.

The Marauders added a run in the top of the fourth to lead 5-0, when Sydnee Stapleton singled, stole second and third and scored on a ground out to first by Mallorie Copeland.

Prescott, ranked #8, was finally able to break through in the bottom of the fourth when Leigha Walker singled, followed by an Eliza Legge single. Both players stole a base to put runners at second and third. Sophia Fanchin grounded out to score Walker. RJ Parra, in a preview of what was later to come, blasted a two run homer to left, to trim the deficit to 5-3.

The Marauders added a run in the top of the fifth as well to lead 6-3 on a two out double by Marissa Vocca.

In the bottom of the fifth. Makayla Reyes hit a one out single that tight roped the third baseline. Eliza Legge singled in Reyes who had stole second to get into scoring position, to draw the Badgers within 6-4.

The top of the seventh, the Marauders added what they thought would just be an insurance run. Ella Behlow doubled and scored on a ground out by Mackenzie Figy.

Trailing 7-4, the Badgers knew they had some work cut out for them. Dana Seavey started things off with a solid single to center. Ruby Tessman singled past the third baseman putting runners at first and second. Makayla Reyes hit a double in the right centerfield gap scoring Seavey. A strikeout by Ayersman, who had 12 in the game slowed the rally, but briefly. Eliza Legge worked her way into a walk, and a strikeout followed that. Down to their last out, RJ Parra came up with the bases loaded. With a 1-1 count Parra swung connecting with a ball that went to the fence, and with two outs and all runners running on contact, Ellie Long scored the winning run, beating the throw home easily. The Badgers side erupted with jubilation, while it was silence on the Marauders side.

Prescott coach Randall Bryan said, “This is a game that they will remember for the rest of their lives. We sort of gave it to them if we hadn’t come back like we did. That is a very good team and giving them a  four run lead to start was tough. How we came back is just a testament to the heart of this team.”

Eliza Legge, who picked up the win said, “It was a lot of fun. They were hard batters, so I just stood in there and did my best. I just kept working hard.”