Holy Cow! History: The 51st State We Almost Had 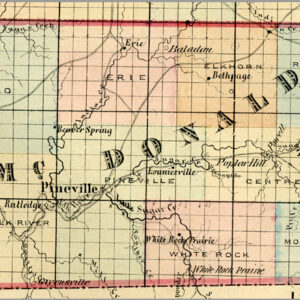 The U.S. House recently approved statehood for the District of Columbia. If the Senate agrees, D.C. could become the 51st state.

But a small fuss that turned into a big uproar could have added another star to the U.S. flag 60 years ago. This is what happened when a Missouri county went rogue.

In the early 1960s, bad feelings toward the state government were brewing amid the rustic beauty of McDonald County. It started when officials renamed a major road without informing local residents. Things went from bad to worse when the county — known for its camping, canoeing and scenic beauty — was left off the state’s 1961 Family Vacationlands map. With tens of thousands of free copies distributed statewide, this was no mere a snub: It was a serious economic blow.

Bureaucrats claimed the omission was a mistake. Then, someone leaked a dirty secret: McDonald had been intentionally left out because it had become “too commercial.”

That was the last straw. In April 1961 residents voted to secede from Missouri and create the McDonald Territory.

It’s important to understand at this was entirely tongue-in-check. McDonald County had to “go big” to get the state’s attention. That took publicity. April 1961 was the 100th anniversary of the start of the Civil War, which began with Southern states seceding from the Union. So, McDonald County piggybacked on that interest to make its point. It just wanted headlines in order to grease its squeaky wheel.

They got them. The “secession” made national news, with stories even appearing overseas.

A territorial government was formed. Special two-cent territorial postage stamps were printed. The McDonald Territorial Border Patrol and Militia stopped all cars entering the territory; occupants were given special “visas,” which were actually clever tourism promotions.

A Territorial Song was even composed, set to the tune of (what else?) Old McDonald’s Farm:

“With a blank map here,

and a blank map there;

you can’t find McDonald County on it anywhere.”

The territory’s leaders met with Gov. John Dalton, who appointed a “diplomat” to negotiate with McDonald. They responded by presenting a passport so he could legally visit. Dalton joked he hoped the territory “wouldn’t get ahead of us in the space race.”

It was all great fun—until things suddenly took an ominous turn. While McDonald Countians were getting their state officials’ attention, officials in other states began paying attention to them.

Henry Saugee from nearby Jay, Oklahoma (who called himself a Cherokee “chief,” although the Bureau of Indian Affairs didn’t share that opinion) proposed turning McDonald into an independent Native American nation. Sauguee told a reporter (in cheesy Western movie “Indian Speak”), “Looking for new tribe territory. Hear McDonald no more Missouri. Not on map. Want big teepee on beautiful bluff. Look for elk on Elk River.”

That was harmless enough. But then, semi-serious talk began about McDonald and neighboring Benton County, Arkansas forming a 51st state. In 1961, both counties were rural backwaters. Today, Benton County boasts the headquarters of J.B. Hunt Trucking and a little company you may have heard of called Walmart. Those corporate giants would have made the tiny state an economic powerhouse.

But that was nothing compared to what happened next.

Arkansas Gov. Orval Faubus told reporters that since Missouri had dissed it, McDonald County could join his state. (There were even claims he made a few phone calls to sound out territorial officials.)

McDonald Territory now had Jefferson City’s full, undivided attention. State officials are politicians, after all. They appreciated a good publicity stunt as much as anyone. But they also recognized a rival politician was sniffing around on their turf. And they didn’t like it.

There are varying versions of what happened next. One says Jefferson City quietly sent word, “It’s been fun, but it’s time to knock it off.” It none too subtly reminded folks that state employees could be fired, state pension checks stopped, and state funding withheld. If McDonald chose to play hardball, Missouri could, too.

Folks got the message. By Christmas, McDonald Territory sputtered out of existence.

The state did offer an olive branch. Starting in 1962, official state-produced maps only promoted national and state parks; commercial enterprises were dropped. It was a sweet consolation prize.

Author Michael Trinklein summed up the episode as “akin to those Christmas Eve broadcasts that report a sleigh and reindeer have been reported on radar.” McDonald County returned to doing what it still does best: providing outdoor fun to its visitors.

PrevPreviousWhat is a Visual Search Guide: Benefits and Optimization Tips
NextSpace tourism – 20 years in the making – is finally ready for launchNext