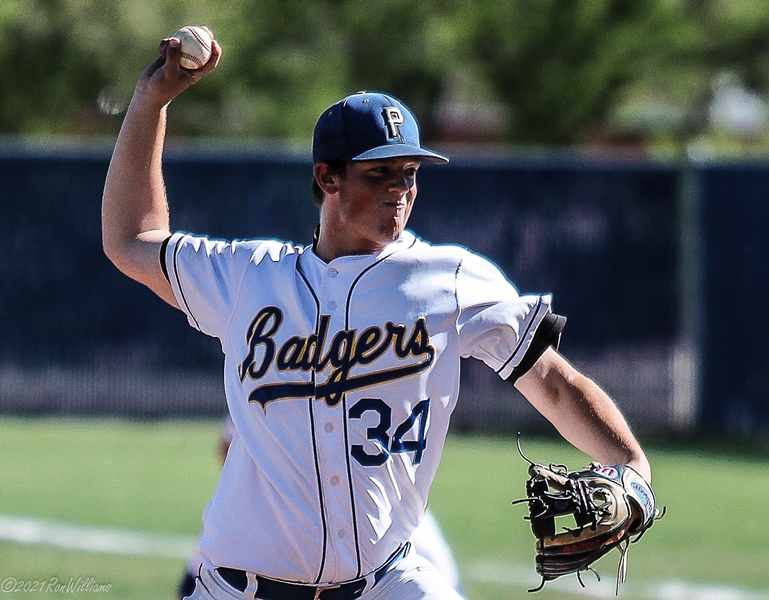 In the makeup game from Tuesday’s rainout in Kingman, the Lee Williams Volunteers beat the Prescott Badgers 9-6. Call this take one.

Levi Isaacs picked up the win and Hunter Hays took the loss for Prescott. Isaacs threw the final two innings after Garrett Diem tossed five innings, allowing three earned runs, six overall, on nine hits, walking two, and striking out seven. Hays who came in for Elvis Hauptman, allowed six runs, only two earned, on five hits, with three walks and six Ks. Hauptman went 2.2 innings, allowing two earned runs on four hits, with one strikeout and three walks. Badger errors were the difference, and not in a good way.

Lee Williams took a 3-0 lead before the Badgers responded with one in the third and three in the fourth to lead 4-3.

The Volunteers put up four, thanks to a couple of Badger errors to regain the lead at 7-4. Prescott cut the deficit to 7-6 in their half of the fifth. Lee Williams added a couple of insurance runs for the three run win.

After a break the teams got back on the field for the second game of the day. The weather was very nice and the fans in attendance were happy to be out enjoying high school baseball.

The second game of the day saw the same identical score of 9-6, call this take two, with a very similar story as the Badgers fell behind, took the lead, but lost that lead eventually losing the game.

The Volunteers jumped out to a 3-0 lead, before the Badgers picked up one in the third, and four in the fourth, to lead 5-3.

Badger starter Tyson Potts worked his way out of a big jam in the top of the fifth. After loading the bases with one out, Potts worked hard to get a strikeout, and an inning ending fly ball to left to keep the Bagders lead at 5-3.

Lee Williams would break through in the sixth, chasing Potts for reliever Scooter Schwartz. Potts left giving up three earned runs and nine hits, with three strikeouts and two walks. Schwartz was taken for four runs on just two hits, but with three walks. Alex Vaughn came in to get the final out of the top of the seventh, but the damage was already done. Once again it was costly Badger errors, seven in all, that hurt the home team.

The Volunteers were led by Rye Samson who had four hits and an RBI. Dylan Peterson and Garrett Diem had three hits each with Diem picking up two RBIs and Peterson, with a triple had one. Nick Kennedy had a double and two RBIs.

The Badgers only managed two extra base hits, a double by Tyson Potts and a triple by Scooter Schwartz. Ethan Ammerman had two hits and an RBI, and Schwartz had three RBIs.

Prescott falls to (4-6) in the Grand Canyon Region and (7-9) overall. Lee Williams improves to (6-4) in the GCR and (10-5) overall. Next up for the Badgers will be a non-region contest at Estrella Foothills in Goodyear, on Friday at 6pm. The final home game will be Tuesday versus Mingus at 3 pm.

The Badgers are literally on the playoff bubble, and will need to get some wins in order to have a chance at a road playoff game.

The Badgers made it two in a row over the Lee Williams Volunteers with a 21-3 pounding in Kingman.

RJ Parra started in the circle and threw two innings, giving up three runs on three hits, before giving way to Eliza Legge. The final three innings saw the Volunteers get only one hit while striking out seven times, thanks to Legge.

Prescott trailed 3-2 after two innings, before erupting for an eight run third. Ava Hlavacek hit a home run and had four RBIs. Sophia Fanchin and Kennedy Carr each had a double. Elle Long had a pair of singles and two RBIs.

It was the Lee Williams errors that led to 11 Badger unearned runs that helped with the lopsided score.

Olivia Register had an RBI single, and Sara Huntoon had two singles with an RBI.

Lee Williams falls to (1-11) in the Grand Canyon Region and (2-16) overall. The Volunteers will host their final game of the season against Lak Havasu, on Tuesday, at 6pm.

The Badgers improved to (8-2) in the GCR, and (14-2) overall. Prescott will have two big games versus region leader Mingus next week. The Badgers will host the game on Monday at 4pm, and will play their final regular season game in Cottonwood on Thursday at 3:45 pm. Playoffs will start the following week.

The Badgers picked up a 3-1 win over Notre Dame Prep, in Scottsdale, keeping the Saints winless on the season.

PrevPreviousOpinion: Patriots Not Welcome
NextAmerican cities have long struggled to reform their police – but isolated success stories suggest community and officer buy-in might be keyNext