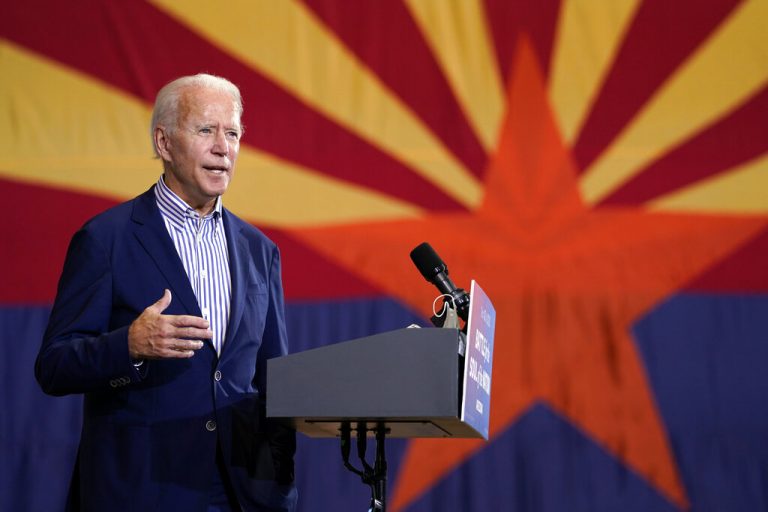 The 2020 census is shifting states’ clout in presidential politics. And while the changes won’t upend the parties’ basic strategies for securing the votes needed to win the White House, they do hint at new paths emerging.

The 2020 census population counts announced this week will result in 13 states seeing a change in their number of votes in the Electoral College, the body that formally elects the president. The overall pattern was clear: Rust Belt and upper Midwestern states will hand some of their votes to Sun Belt and Western states in 2024 and 2028.

The changes wouldn’t have done much to President Joe Biden’s Electoral College majority in 2020. If Biden ran under the new count he’d have defeated then-President Donald Trump by 68 electoral votes, rather than a 74-vote margin.

But the new numbers show a clear transition afoot. Gone are the days when Republicans held a near-absolute advantage across the southern half of the United States, forcing Democrats to secure victories in the “Blue Wall” throughout the industrial north.

Instead, the two regions are now parallel battlegrounds.

“It’s almost like two trains passing in the night — the Sun Belt trending Democratic and the demographics of the Rust Belt going more Republican,” said Democratic pollster Zac McCrary. “But these things don’t happen overnight, so in 2024 we’re going to see a very competitive Rust Belt and a very competitive Sun Belt — and you could see more splits between the two parties in both regions.”

For Democrats, that offers more paths to the required 270 electoral votes than when they depended on a solid band of states from Pennsylvania to Minnesota. Now, they can lose Ohio, which has shifted from perennial battleground to a clear GOP lean, and try to win the White House with former GOP bedrocks like Georgia or North Carolina.

The last two elections showed the evolving balancing act for both parties, with Biden in 2020 and Trump in 2016 each winning states worth a combined 306 electoral votes.

Biden did it with close wins in Wisconsin, Michigan and Pennsylvania, while adding razor-thin margins in Georgia and Arizona to flip those Sun Belt states to Democrats for the first time in decades. Trump had won all five states four years earlier, with his razor-thin margins coming in the upper Midwest and wider margins in Arizona and Georgia.

But Biden’s winning map would be worth just 303 electoral votes in 2024, mostly because of California and states across the upper Midwest losing representation. Trump’s winning map from four years earlier would inch up to 307 electoral votes, with his diminished Rust Belt totals shored up by gains in Texas, Florida and North Carolina — three growing Sun Belt states that still tilt Republican in presidential politics.

Meanwhile, the decades-long drift of small-town white voters away from Democrats had essentially run its course in the Sun Belt by the 2020 presidential cycle. But it’s still continuing across the Rust Belt.

That means the GOP has room to grow in the upper Midwest because new Democratic voters in metro areas don’t necessarily outnumber Republican gains beyond cities. The Sun Belt offers Democrats the reverse: metro-area residents of all races and ethnicities chip away at the GOP advantage beyond cities.

Presidential math turns on how those trends play out alongside each other.

McCrary, the Democratic pollster, contemplated “a new Blue Wall” that adds North Carolina, Florida and Texas to Arizona and Georgia. Indeed, Texas and Florida’s electoral votes, added to California, New York and Illinois, would get a Democratic nominee almost two-thirds of the way to the 270-vote threshold, even after those old Democratic bastions lose ground in the electoral ground.

Yet, Republicans note, Texas and Florida are still theirs to lose. Texas’ partisan gap narrowed over the last decade, but Trump outpaced Biden by 5.5 percentage points. Florida is perpetually close, but Republicans have won four out of the last six presidential contests there and dominated other statewide races over the same period.

Brock McCleary, a longtime Republican pollster, said the GOP’s rebranding to “working-class identity” is necessary for Republicans to build a new “Red Wall” in the upper Midwest and stay competitive long-term in the Sun Belt, where it takes “multi-racial coalitions” even for Republicans to win.

“Big-tent populism,” McCleary said, is an especially good fit in the upper Midwest, as evidenced by Trump twice managing wide margins in Ohio and Iowa, states once considered coin flips.

Republicans also are boosted by an Electoral College system that elevates GOP voting power in less-urbanized states. That helped Trump and George W. Bush win the presidency despite losing the popular vote.

In 2020, Biden got 81 million votes nationally, more than any candidate in history, and led Trump by about 7 million votes. While it was enough to flip five states, including the key Midwestern battlegrounds Trump had stripped from Democrats in 2016, Biden had little margin for error: His combined margin in Georgia, Arizona and Wisconsin was less than 43,000 votes.

Had Trump prevailed in those three states again, he’d be in his second term and Biden would have joined Hillary Clinton in 2016 and Al Gore in 2000 as Democrats who got the most votes but lost the White House.

“The reality is that in a 50-50 presidential election nationally, Republicans have the (Electoral College) advantage,” McCrary said. “And unfortunately for Democrats, that stays true even a few points beyond 50-50.”

PrevPreviousUS ‘Real ID’ deadline is now May 2023 because of COVID-19
NextChris Christie to GOP: Want to Win? Treat Biden Like Media Treated TrumpNext