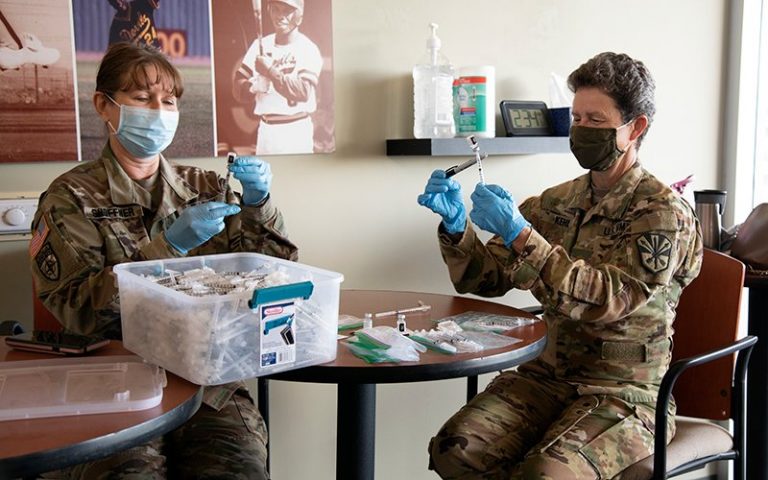 When Gov. Doug Ducey sent hundreds of National Guard members to help at the border last week, the move may have been unexpected – but it was not unusual for the troops that have spent a year shuttling from one crisis to another.

From stocking pandemic-depleted grocery shelves to fighting wildfires, from setting up vaccination sites to providing support in cities hit by civil unrest, the nearly 8,300 members of the Arizona National Guard have been constantly pulled in different directions.

“I haven’t been bored one day since we started this,” said Col. Tom Leeper, who was charged with running the Arizona National Guard’s Task Force Medical last year.

Maj. Gen. Michael McGuire, who was adjutant general of the state guard until retiring earlier this month, said the last time the guard was this busy was in the days following Sept. 11, 2001. The outbreak of COVID-19 was the first time since then that Arizona had a major statewide declaration of emergency, he said.

“Kind of interesting bookends to my career, in the years from 2002 to 2020,” McGuire said recently.

Arizona Guard members were not alone. According to the National Guard Bureau, Guard units nationwide spent more than 10.3 million days in the field last year, four times more than they did in 2019, said Nahaku McFadden, media operations chief of the National Guard public affairs bureau.

McGuire said Arizona has not had “that level of mobilization and participation since World War II.”

From the very beginning of the pandemic – when Ducey first activated the guard on March 19, 2020 – they have been on the go, participating in a little bit of everything. After months spent stocking food banks and grocery shelves, and helping to run COVID-19 test sites, Guard members were called on last summer when civil unrest arose in response to the killing of George Floyd in Minnesota.

“We put 1,495 of our National Guardsmen on duty in support of five counties’ sheriff’s offices and 12 police departments,” McGuire said. “That mission lasted about 10 to 14 days and then we brought those soldiers off mission.”

As COVID-19 vaccines were rolled out, so were Guard members, to help set up vaccination sites. While Arizona soldiers did not patrol Washington after election-related unrest this year, they did go to provide support for other Guard units that were in Washington for President Joe Biden’s inauguration.

“Arizona has participated in every inauguration since I’ve been 20 years in the Guard,” McGuire said. “We had committed at that point to 29 servicemembers to go out and do sustainment missions, specifically cooks, to do some food preparation for those who were going to be part of that task force.”

And much of the work is being done by part-time soldiers.

“I typically am an M-day soldier, which means that I drill one weekend a month and then I do an annual training of about two weeks per year,” Leeper said.

Juggling all those deployments involves more than coordinating troops – for Guard units, it also means working with the businesses where members have full-time jobs, said Leeper, who was put in charge of the task force that focuses on the medical side of COVID-19 deployments.

“I work downtown at the Phoenix VA, in the emergency department, so it was really hard for them to let go of me during this period of time,” said Leeper, who normally serves at the state surgeon for the Arizona Army National Guard.

Since the task force was created, it has helped the Arizona Department of Health Services administer COVID-19 tests and vaccinations, as well as providing support to nursing homes and helping ensure community access to personal protective equipment, like masks and gloves.

“We had our task force medical folks out helping set up on testing sites, helping run testing sites,” Leeper said. “We had some of our own testing sites and then we basically just blended in with the civilian workforce at that point.”

Members who helped establish vaccine points of dispensing, or POD, sites “essentially cut our teeth on how to set up vaccination sites,” Leeper said. “So when State Farm POD came along, we were at the table and showed them what best practices looked like and what things to avoid.”

“Thank goodness, finally, vaccines came along and that was where we really, I think we made our most lasting impact was helping set up vaccinations sites,” Leeper said.

Task Force Medical is made up of Air and Army National Guard members. There have been as many as 138 members, but for most of the time there were fewer than 70 members, Leeper said. They had administered more than 290,000 vaccinations by mid-April, according to David Nunn, public affairs officer of the Arizona National Guard.

Demand for Guard help has continued into the new year, with COVID-19 vaccinations and the recent deployment in response to a surge in the number of migrants apprehended at the border. McGuire said that being part of the vaccination discussion, and helping execute that plan, has been the most rewarding of all the tasks thrown at the Guard over the past year.

Leeper said it’s all been interesting.

“It’s been a roller coaster ride,” he said.