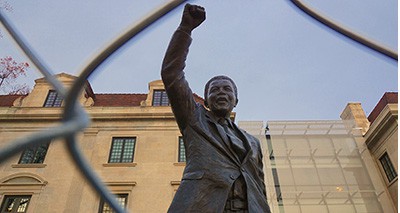 What do an airline bankruptcy, a national post office bankruptcy, a Road Accident Fund bankruptcy, a city’s largest hospital burning down because the fire hydrants weren’t maintained, and parts of a nation’s oldest university destroyed by arson have in common? They all happened in the last four weeks in South Africa, the Rainbow Nation that was supposed to show the world how wonderful things would be if only whites were driven from power.

1. The end of South African Airways

On April 14, 2021, South African Airways (SAA) got a new interim CEO, Thomas Kgokolo. He is a chartered accountant, so he must be qualified, right? Perhaps not. Well-known South African liberal white commentator Peter Mansfield tweeted this shortly after the appointment: “New SAA CEO only knowledge of airlines is as a passenger. Daft. Bound to fail.”

While everyone of good will doubtless wish Mr. Kgokolo well in his new job, he does seem to be struggling against the odds. State-owned SAA — which, under the control of the white régime, was a world-class, profitable airline with its own Boeing-certified technical center — has taken a nosedive. Shortly after the 1994 handover of power to the ANC, the 60-year-old airline got an “affirmative action” program. Many white personnel were driven out and replaced by people barely qualified for the jobs.

What came to light in 2010 was instructive. It emerged that CEO Khaya Ngqula had spent over $4 million on “friends,” and had “awarded contracts to companies in which he had an interest.” This opened a teeming can of worms. After 2010, the airline never showed a profit, and by 2017, its annual operating deficit was over ZAR 2,760 million (about $200 million). SAA was eventually bailed out by the South African government with over ZAR 50 billion (about $4 billion) between 2004 and 2020.

Despite the cash infusion, SAA went into bankruptcy at the end of 2019. The next year, the government announced a complete halt to all further funding, and in May 2020, using Covid as an excuse, all SAA staff members were sent home on an unpaid leave of absence. The government announced that SAA would cease operations and that a “brand new” airline would be built from scratch with an additional ZAR 10.5 billion (about $800 million) in government money. It remains to be seen how former passenger Mr. Kgokolo will deal with this.

The South African Post Office (SAPO) — another state-owned institution, which traces its roots back to its founding in 1792 — had, by 1994, become a sophisticated, self-funding network with a universal service obligation. But now — like SAA — it has been “running on empty” for many years. According to official figures, in the 2016–2017 financial year, it ran up a ZAR 1,135 million (about $86 million) loss, beaten into second place in the bankruptcy league only by SAA.

On April 13, 2021, the South African Auditor-General (AG) admitted that the SAPO had “incurred irregular expenditure of over ZAR 200 million as well as fruitless and wasteful expenditure exceeding ZAR 26 million.” “Irregular expenditure” of about $15 million means that the accounting records were so bad that the Auditor-General couldn’t figure out where the money had gone. The AG “could not find any evidence that action had been taken against officials that had caused the company to incur both irregular as well as fruitless and wasteful expenditure” and that “internal controls have also been found to be grossly inadequate.” For the financial year 2019 to 2020, the post office had losses of over ZAR 1.7 billion (about $130 million) and its liabilities exceeded its assets by ZAR 1.5 billion (about $114 million).

To be fair to management, problems go right down to post-office branch level. The SAPO became a huge “affirmative action” program. As a government white paper explains, its goal became improving the “capacities of the historically disadvantaged through . . . practical measures that support their advancement within the Public Service.”

The results were predictable. According to an April 2021 parliamentary answer by the Acting Minister in the Presidency, Khumbudzo Ntshaheni, only “53 percent of South Africa’s senior municipal managers meet minimum competency levels.”

The SAPO’s banking subsidiary, Postbank, was recently thrown into chaos after its three top executives were suspended because they failed to “exercise due diligence” in the company’s operations. This is a headache for the ANC government because Postbank is the major vehicle for redistributing wealth from the white minority to everyone else. As a Johannesburg newspaper explained, the “Post Office says it fulfills a critical role in servicing the needs of the indigent and a large section of the population as it has a footprint everywhere in the country.”

How about the rest of the economy? South Africa’s statistics agency, Stats SA, says that the official unemployment rate in 2020 was 28.1 percent. That’s high, but something doesn’t add up. According to the latest (Second Quarter 2018) statistics, there are only some 9.7 million people in the “formal employment sector.” The population of South Africa is 59.62 million. That means only 16 percent (9.7 million of 59.62 million) of the population is formally employed.

According to the annual Tax Statistics Report, there are only 4.9 million taxpayers in South Africa, which means that only 8.2 percent of the population pays the bills for everyone else. Because millions of welfare recipients get their cash from SAPO branches, a collapse would cause chaos.

3. The end of the road for the Road Accident Fund

According to its official definition, the “Road Accident Fund (RAF) provides compulsory cover to all users of South African roads, citizens and foreigners, against injuries sustained or death arising from accidents involving motor vehicles.” It is funded by a gasoline tax that collects around ZAR 3.6 billion (about $280 million) a month. That’s not enough.

The World Health Organization reports that South Africa has one of the “world’s poorest road safety records,” with around 31.9 fatalities per 100,000 people. The African average is 24.1, and the US rate is 12.4. Every day in South Africa, traffic accidents kill more than 40 people and leave at least 20 permanently disabled.

Whatever the cause, the fact remains that the ZAR 3.6 billion per month is not enough to keep the RAF on the road. As of April 2021, it pays out 17 percent more every month than it takes in, so its debts are mounting quickly.

On April 18, 2021, South African media reported that that country’s Road Accident Fund had asked the North Gauteng High Court to bar sheriffs from seizing properties for failure to pay successful claimants. This was granted, with debts older than 180 days to be paid before the end of April, and the rest by September 12.

4. The Johannesburg General Hospital burns down

By 2014, the Johannesburg Sunday Times reported that “a shocking picture of a major public hospital falling apart” had emerged from “letters written by 12 of its heads of department.” Doctors reported that they were “unable to control the amount of blood pumped into patients undergoing heart bypass surgery because of a shortage of blood transfusion bags.” One doctor wrote of “heart surgeons having to use camp lights because theatre lights are broken. . . . ‘I now use a camping headlight for paediatric cardiac surgery.’ ”

There were other problems. On April 16, Charlotte Maxeke Hospital caught fire and burned so badly that all patients had to be evacuated. Then we learned why the blaze was uncontrollable. 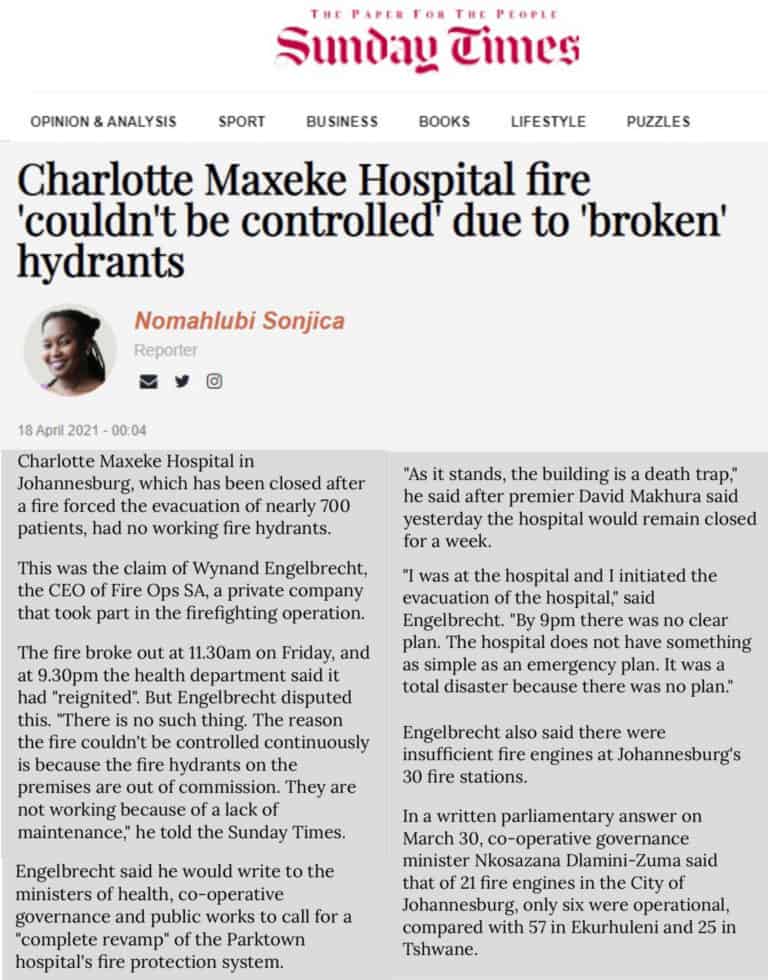 According to a report in the Sunday Times, the “reason the fire couldn’t be controlled continuously is because the fire hydrants on the premises are out of commission. They are not working because of a lack of maintenance . . . As it stands, the building is a death trap.” The Times also noted that of the 21 fire engines in Johannesburg, only six were working.

The University of Cape Town (UCT) is South Africa’s oldest university, with a rich history going back to 1829. On April 18, a fire — reportedly started by “vagrants,” now said to be “arsonists” — started on Table Mountain, east of main campus, and swept down the hillside. 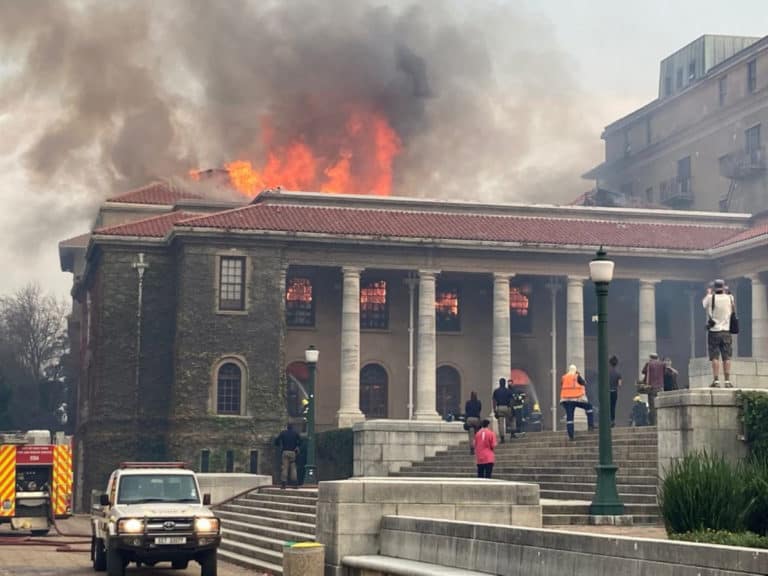 Table Mountain has had a “vagrant” problem ever since the ANC handover. The 62,000-acre Table Mountain National Park shelters an army of “street people” that resembles the homeless masses that overrun parts of Los Angeles. “Vagrant” crime is booming and fires are common. In 2019, the park’s managing executive, Property Mokoena, announced that 120 “tourism monitors” would be appointed to “safeguard the Table Mountain National Park,” which had “borne the brunt of poaching and muggings, some of which resulted in murder.”

This fire destroyed the main part of the university’s famous J.W. Jagger library — which held tens of thousands of irreplaceable books and manuscripts, many dealing with African history — and spread to other buildings. John Tugendhat, Chairman of Britain’s Foreign Affairs Committee, said that the fire was a “tragedy for humanity” because the “study of African history is hugely important and often ignored.”

The first Xhosa dictionary was written by a white Scottish missionary, John Bennies, in 1823, and the first Xhosa-language newspapers were also published by white missionaries. What these people are calling African history is really European technology and know-how transplanted to Africa.

Perhaps this was the thinking of Africans who celebrated the fire. “The apartheid empire in ashes” tweeted MAQHUZU in response to pictures showing the destruction of a 1796 windmill and some thatched-roof student residences.

Thus it is in the new South Africa: a runaway fire takes on a racial meaning. As a stand-alone event, the fire would be a tragedy. Against the backdrop of the last four weeks, it becomes not just the ashes of an “apartheid empire,” but of Western Civilization.

Francois Potgieter is a long-suffering colonial originally from Rhodesia.
All Posts »