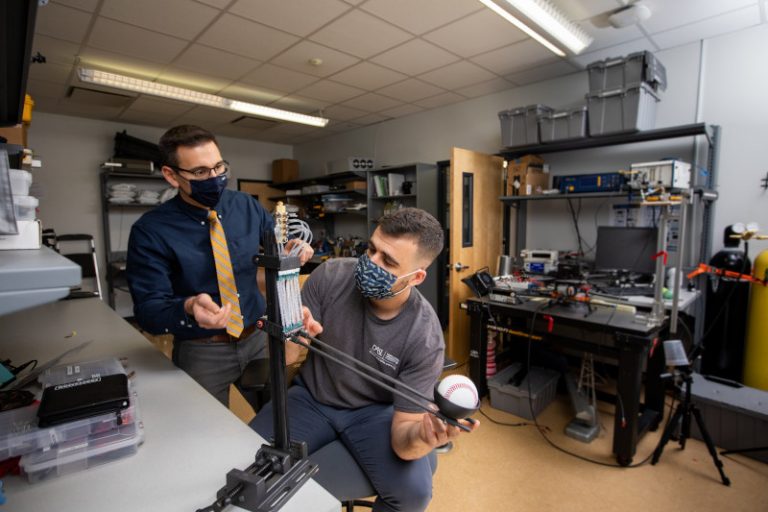 In the field of robotics, researchers are continually looking for the fastest, strongest, most efficient and lowest-cost ways to actuate, or enable, robots to make the movements needed to carry out their intended functions.

The quest for new and better actuation technologies and “soft” robotics is often based on principles of biomimetics, in which machine components are designed to mimic the movement of human muscles—and ideally, to outperform them. Despite the performance of actuators like electric motors and hydraulic pistons, their rigid form limits how they can be deployed. As robots transition to more biological forms and as people ask for more biomimetic prostheses, actuators need to evolve.

“We call these new linear actuators cavatappi artificial muscles based on their resemblance to the Italian pasta,” Shafer said.

Because of their coiled, or helical, structure, the actuators can generate more power, making them an ideal technology for bioengineering and robotics applications. In the team’s initial work, they demonstrated that cavatappi artificial muscles exhibit specific work and power metrics ten and five times higher than human skeletal muscles, respectively, and as they continue development, they expect to produce even higher levels of performance.

“The cavatappi artificial muscles are based on twisted polymer actuators (TPAs), which were pretty revolutionary when they first came out because they were powerful, lightweight and cheap. But they were very inefficient and slow to actuate because you had to heat and cool them. Additionally, their efficiency is only about 2 percent,” Shafer said. “For the cavatappi, we get around this by using pressurized fluid to actuate, so we think these devices are far more likely to be adopted. These devices respond about as fast as we can pump the fluid. The big advantage is their efficiency. We have demonstrated contractile efficiency of up to about 45 percent, which is a very high number in the field of soft actuation.”

The engineers think this technology could be used in soft robotics applications, conventional robotic actuators such as walking robots, or potentially in assistive technologies like exoskeletons or prostheses.

“We expect that future work will include the use of cavatappi artificial muscles in many applications due to their simplicity, low-cost, lightweight, flexibility, efficiency and strain energy recovery properties, among other benefits,” Shafer said.

Working with the NAU Innovations team, the inventors have taken steps to protect their intellectual property. The technology has entered the protection and early commercialization stage and is available for licensing and partnering opportunities. For more information, contact NAU Innovations.

Shafer joined NAU in 2013. His other research interests are related to energy harvesting, wildlife telemetry systems and unmanned aerial systems. Feigenbaum joined NAU in 2007, and her other research interests include ratcheting in metals and smart materials. Higueras-Ruiz received his master’s degree in mechanical engineering from NAU in 2018 and will complete his Ph.D. in bioengineering in the fall. This work has been supported through a grant from NAU’s Research and Development Preliminary Studies program.