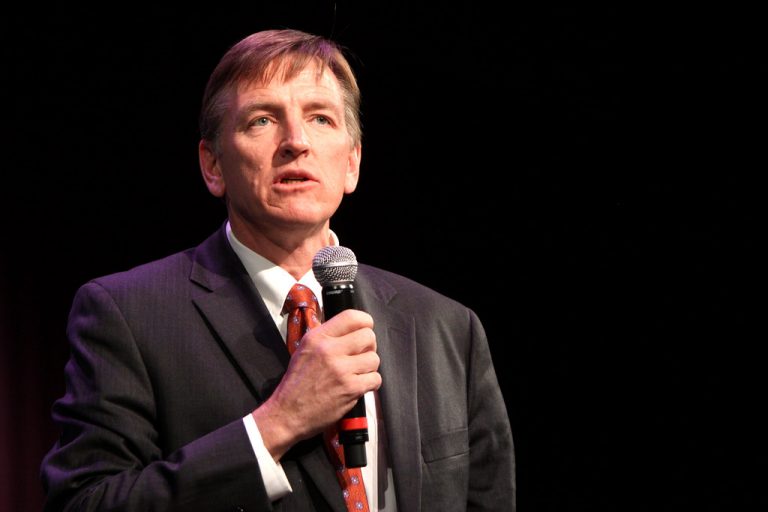 Arizona Rep. Paul Gosar has tried to distance himself from reports he was backing a caucus that would defend “Anglo-Saxon political traditions,” but political analysts say the flap is unlikely to harm the conservative Republican’s re-election prospects.

“If Gosar’s district looks like it does now, he should be fine,” said Kyle Kondik, managing editor for Sabato’s Crystal Ball at the University of Virginia Center for Politics.

“There probably are other things that he could do that would make him vulnerable in a primary, but I don’t think what’s been reported over the past several days qualifies,” Kondik said in an email Monday.

What’s been reported is the uproar over plans for an America First Caucus that Gosar and Rep. Marjorie Greene, R-Georgia, were developing to preserve former President Donald Trump’s policies and “get back to first principles” in government.

Much of the document lays out standard conservative talking points, including calls for tighter borders, election security, states’ rights, a tough stance against China and less foreign aid and military intervention.

But it sparked an outcry over language saying immigration should be limited to those who respect “uniquely Anglo-Saxon political traditions” and “this nation’s culture.” Another section says infrastructure should “reflect the architectural, engineering and aesthetic value that befits the progeny of European culture.”

Shortly after the policy paper was reported Friday by Punchbowl News, Gosar and Greene both said they had not seen the draft document, which they said was being spread by “lying media” in an effort to discredit them.

“Imagine my surprise to read ‘I wrote it,’” Gosar said in a statement released by his office Saturday. “Let me be perfectly clear, I did not author this paper. In fact, I first became aware of it by reading about it in the news yesterday, like everyone else.”

That did not stop critics from attacking the document, including two of the top three House Republicans. Rep. Lynne Cheney, R-Wyo., tweeted that “racism, nativism and anti-Semitism are evil” while House Minority Leader Kevin McCarthy said in a tweet the “Republican Party is the party of Lincoln & the party of more opportunity for all Americans – not nativist dog whistles.”

A Punchbowl News co-founder said the organization verified what it called a newsworthy document before filing its report.

“This was clearly very controversial and you know, the language was inflammatory and nativist and as soon as we saw it, we thought this would be an issue for folks and our job is to put it out there, so we did,” said John Bresnahan, the co-founder.

“We were provided a copy of the document … from a Republican on the Hill and it was being circulated by folks who said it was Marjorie Taylor Greene and Paul Gosar (who) were going to want this caucus,” Bresnahan said.

In a statement Friday, Greene said the leaked document was a “staff-level draft proposal from an outside group that I hadn’t read…. The scum and liars in the media are calling me a racist by taking something out of context.”

While they backpedaled from the document, both Gosar and Greene pledged in their statements to keep pushing Trump’s America first agenda. Gosar did not respond to a request for comment Monday, but said in his statement that he would not let “the lying media deter me from the America First work I have been championing for years.”

Analysts say Gosar could face challenges in 2022, from redistricting to making a run for statewide office, but that the America First Caucus flap is not likely to present a challenge in his current district.

Arizona’s 4th District, which Gosar represents, is overwhelmingly Republican, according to the most recent data from the Arizona Secretary of State’s office. As of January, registered Republicans accounted for 49% of the district’s voters, compared to 30.9% for independents and 19.2% for Democrats.

Gosar has never received less than two-thirds of the vote in the district, which President Donald Trump carried by a 68-31 margin in 2020, “so it is not winnable by a Democrat in its present form,” Kondik said.

Sean Noble, a political consultant for Compass Strategies, put it simply: “This will not impact Congressman Gosar’s political future.”

But Nathan Gonzales, editor and publisher of Inside Elections, said it is too early to predict Gosar’s political future because “we’re not quite sure what he wants to do.”

“There’s a few options,” Gonzales said. “There is running for re-election or running statewide or not running at all.

“It’s too early to tell what the political ramifications are,” he said. “We’re a long way from the elections … the districts are going to change in Arizona and some of them significantly with the state adding a seat.”

While he is likely safe in his current seat, Kondik said it’s a different story if Gosar decides to run for statewide office.

“The state electorate as a whole is very competitive and evenly matched between the two parties, and he may be too right-wing of a candidate to win statewide,” he said.