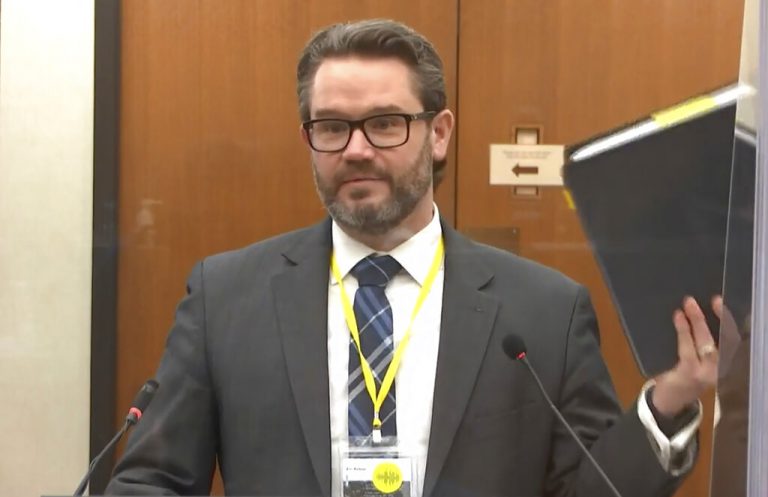 The only witness on the stand yesterday was Dr. David Fowler, a retired forensic pathologist who worked for the Maryland medical examiner and spent his career determining causes of death. He has testified in court many times, and was hired by the defense at $350 an hour.

The purpose of his testimony was to plant reasonable doubt in the minds of the jury on the question of whether Derek Chauvin’s actions really were a substantial contributor to George Floyd’s death. To do this, he had to show that Floyd’s medical condition was serious enough to have contributed substantially to his death, and he put it in these words: “In my opinion, Mr. Floyd had a sudden cardiac arrhythmia due to his atherosclerotic and hypertensive heart disease. . . during his restraint by police. . . .”

The doctor said significant contributing conditions were narrow arteries, heart disease, Fentanyl and methamphetamine, exposure to vehicle exhaust that increased carbon monoxide in the bloodstream, and Floyd’s paraganglioma: “All of those combined to cause Mr. Floyd’s death.”

When Derek Chauvin’s defense attorney, Eric Nelson, asked the doctor his opinion on the manner of Floyd’s death, the doctor listed the five official possibilities: Homicide, suicide, natural, accidental, or undetermined. Dr. Fowler, who spent much of his life in South Africa and speaks with a British accent, said, “These categories are unique to the United States.” The Center for Disease Control requires that one of them be put on death certificates for statistical purposes.

This is important because Floyd’s death was officially “homicide,” which sounds like “murder” to most people, but need not imply guilt. The National Association of Medical Examiners (NAME) defines each category, and death due to positional restraint may be classified as homicide. Dr. Fowler cited the guideline:

Deaths due to positional restraint induced by law enforcement personnel or to choke holds or other measures to subdue may be classified as Homicide. In such cases, there may or may not be intent to kill, but the death results from one or more intentional, volitional, potentially harmful acts directed at the decedent (without consent, of course). Further, there is some value to the homicide classification toward reducing the public perception that a “cover up” is being perpetrated by the death investigation agency.

Homicide occurs when death results from a volitional act committed by another person to cause fear, harm, or death. Intent to cause death is a common element but is not required for classification as homicide. It is to be emphasized that the classification of Homicide for the purposes of death certification is a “neutral” term and neither indicates nor implies criminal intent, which remains a determination within the province of legal processes.

Dr. Fowler discussed Floyd’s autopsy findings, which showed an enlarged heart. He said that a bigger heart needs more nutrients. If your heart is not getting what it needs, you will have chest pains, palpitations, and shortness of breath. Your body is telling you to slow down and rest, so your heart can replenish itself. If you don’t — or can’t — your heart will fail. The most common cause of an enlarged heart is high blood pressure. Floyd’s records indicated very high blood pressure, and his paraganglioma could also have raised it further.

Floyd already had narrowing in his coronary arteries, which meant that his heart got less oxygen than normal. Floyd was able to go about his daily life, but taking methamphetamine was dangerous, because it especially narrows arteries — even to the point that it can stop blood flow entirely. The doctor said adrenaline is also a vasoconstrictor (narrows blood vessels). Fighting the police led to an adrenaline rush, which caused stress on Floyd’s heart, and his paraganglioma tumor could have been secreting extra adrenaline.

Dr. Fowler said carbon monoxide could have contributed to Floyd’s death. None of the medical experts from the prosecution discussed this, nor was it mentioned on Floyd’s death certificate, but Dr. Fowler said Floyd’s head was at the rear of the vehicle, about a foot from the tailpipe. He did not suggest this was “full” carbon monoxide poisoning, but he did think it contributed to heart failure.

The doctor cited a recent study from Poland, in which a taxi driver committed suicide by lying on the ground, outdoors, next to the exhaust pipe of his taxi. His level of carbon monoxide was high enough to be the exclusive cause of his death, even though his face was about a foot from the tailpipe. Dr. Fowler calculated that in seven minutes, the level of carbon monoxide in Floyd’s blood could have reached 10-18 percent.

The doctor explained that carbon monoxide changes the color of blood, and at high levels this is easy to see. Levels below 20 percent can still cause arrhythmia, but the color change would not have been easy to notice: “There are studies out there where as little as 6 percent saturation of carbon monoxide, in an individual who is exercising, with heart disease, will start causing arrhythmias.” The only way to eliminate carbon monoxide as a contributing factor in Floyd’s death would have been to test his blood, but no test was done. Dr. Fowler said the police were not affected by the exhaust because they were farther from the tailpipe, younger, and probably don’t have heart disease.

Dr. Fowler studied the autopsy photos and found it significant that all of Floyd’s injuries “were in areas where the [defendant’s] knee was not.” There were injuries to his face and wrists, but none to his back or neck. The doctor said Mr. Chauvin’s knee did not impair any of the vital structures of Floyd’s neck. He said that “speaks to the amount of force that was applied to Mr. Floyd . . . . It was not enough to bruise him.” He went on: “If you put 30-50 pounds of force with your knee, directly onto somebody, in my opinion, the chances of a subcutaneous hemorrhage [bruising] is very high.”

The prosecution’s theory is that George Floyd died of low oxygen, or hypoxia, because the officers restrained him in a way that prevented him from expanding his chest and getting enough air. The prosecution argued that holding Floyd face down led to “positional asphyxia.” In reply, Dr. Fowler cited a 2017 study that states, “Positional asphyxia, as the term is used in court today, is an interesting hypothesis unsupported by any experimental data.” He also mentioned studies that found that a healthy, face-down person can take up to 225 pounds on his back without showing signs of hypoxia.

Dr. Fowler said that low-oxygen symptoms are confusion, disorientation, appearance changes, difficulty speaking, and shortness of breath. Floyd did say he couldn’t breathe, but the doctor did not see the other symptoms when he examined videos. He said Floyd was “coherent and understandable until shortly before there was a sudden cessation of his movement.”

Prosecution witnesses said that they saw Floyd dying a “gradual” death, rather than the “sudden” death associated with a heart attack, but Dr. Fowler saw the opposite. He said that Floyd spoke coherently, then moved without speaking, then fell suddenly unconscious: “This was a sudden cardiac event.”

Mr. Nelson showed photos of Floyd in his car, right after being approached by police. A white pill is visible in his mouth. He noted that dissolved pills were found in the back of the squad car, which contained Fentanyl and methamphetamine, and they had Floyd’s saliva on them. The doctor said that Fentanyl is 80 times more powerful than morphine. It slows breathing, which reduces the ability to get oxygen into the blood. Floyd’s autopsy found Norfentanyl in his blood. The liver breaks Fentanyl down into Norfentanyl, so this means the Fentanyl had already been acting on Floyd.

The doctor summarized Floyd’s conditions: a vulnerable heart, narrow vessels, drugs that narrow arteries and slow breathing, and carbon monoxide exposure. “At some point, the heart exhausted its reserves of metabolic supply, and went into an arrhythmia and stopped pumping blood.” The cause of death was therefore, “Cardiac arrhythmia due to hypertensive and atherosclerotic heart disease during restraint.” Contributing causes were Fentanyl, methamphetamine, carbon monoxide, and paraganglioma.

Determining Floyd’s manner of death — the CDC category — was difficult. The carbon monoxide could be accidental, but someone was holding him there, so it could be homicide. Drug overdoses are usually considered accidental, but Floyd had serious diseases. However, this was a stressful situation in which Floyd was being restrained, and that suggests homicide. “All put together,” Dr. Fowler said, “I would fall back to undetermined.”

Prosecutor Jerry Blackwell, who is black, did cross-examination. He was disrespectful and so dripping with contempt that the judge called him over and appeared to tell him to tone it down. Mr. Blackwell suggested that Dr. Fowler was trying to “confuse the jury,” and he repeated this charge throughout his examination. He brought up the white substance that appeared in Floyd’s mouth in the photos. He displayed a photo of Floyd in Cup Foods, open-mouthed, with a wad of white gum in his mouth. Dr. Fowler conceded that he did not know for sure what was in Floyd’s mouth. On redirect, Mr. Nelson brought up the tests on the dissolved pills found in the squad car.

Mr. Blackwell went through a list of different kinds of medical specialists, asking Doctor Fowler if he was each of these. Dr. Fowler said no to all of them.

Mr. Blackwell said that the paraganglioma would be a problem if the tumor were secreting, but he pointed out that the medical examiner who identified it during the autopsy did not test to see if it was secreting. Dr. Fowler agreed, and said that the only way to find out is to do a blood test, but that would show only if there is constant secretion. A surge in secretion can be detected only with repeated urine tests, which can’t be done after death. Mr. Blackwell asked the doctor if Floyd had complained of a headache, a common symptom of a paraganglioma that is secreting. The doctor said he thought Floyd had, but was not sure. On redirect, Mr. Nelson showed video and asked if Floyd had said, “Everything hurts.” The doctor said he had.

Mr. Blackwell asked Dr. Fowler if any pills were found in Floyd’s stomach, adding that any pill in the car could not be in Floyd’s body. Dr. Fowler conceded that there were no pills in Floyd’s stomach. On redirect, Mr. Nelson had the doctor mention Floyd’s saliva on the partially dissolved pills. Testimony for the defense will continue.

There are two grounds on which the jury can acquit Mr. Chauvin: that his use of force was legal and reasonable, and/or that Floyd was so medically fragile that this was a substantial cause of his own death. Yesterday’s expert testimony for the defense was supposed to show that Mr. Chauvin’s use of force was legal and reasonable, but witness Barry Brodd took some damage on cross examination. This was a much better day for the defense.