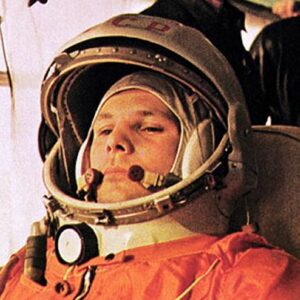 History does not record the exact moment of the Earth’s creation or when humanity took hold of the planet. But we do know when we made our first journey beyond it – April 12, 1961. Sixty years ago, a 27-year-old air force pilot strapped into a rocket and changed the world and humanity forever. That pilot, Yuri Gagarin, and his single 108-minute-long orbital flight around the Earth is the moment everything changed, though not in the ways we first thought.

For generations, we’ve looked at the grainy black and white footage of Gagarin’s sole spaceflight through the lens of the Cold War era in which it occurred. None of that is unreasonable, as it was the opening days of the “space race” between the U.S. and the Soviet Union. For as much as that contest was about national wills, pride, and military prowess, it was also a battle of East versus West ideologies about who would lead the world going forward into unknown frontiers.

Fortunately, time has an ability to refocus dates and events and 60 years later, it’s worth reexamining how one bold norm-defying action can open unimagined possibilities. Like the 12-second flight of the Wright Brothers at Kitty Hawk that would ultimately revolutionize 20th century movement, industries, and economies around the globe, Gagarin’s flight also heralded a different way of doing things. Not just in space travel or science and technology, but rather in who is capable of leading future ways forward.

Today it’s worth recognizing how Gagarin’s flight was the first step by one nation; quickly followed by another (the U.S.), and 60 years later has become a global space ecosystem with 85 countries now competing as well as collaborating. Joining them are the hundreds and thousands of companies, with millions of people in the public, private, and military sectors, all working with space – in exploration, in orbit, and back here on Earth with technologies, services, and operations that enhance life on this planet.

That’s a powerful legacy. But it is also the ripple of a historic moment that really becomes more important with time. We see that playing out today onboard the International Space Station (ISS) as we start a third decade of living, operating, and exploring together with several countries and now companies participating.

If the past decades of space operations have proven anything, it is curious people who bring their talents, engineering, resources, and passions together can take you in unimaginably rewarding directions.

Today, space is less about ego than it is about operations and opportunities. As the critical infrastructure upon which every industry is dependent, a day without space access and space-inspired technologies would be catastrophic to the security of the world’s economies and ways of life. Today’s global space ecosystem is a collection of integrated systems and stakeholders rather than the competitive political monoliths some would like to easily classify it. History all too often provokes us to apply old terms, mindsets, and measures to new eras, which is why looking at humanity’s first flight beyond Earth deserves greater appreciation by all of us today.

The health and durability of this ecosystem depend on factors in three core mission areas: education, information, and collaboration. The space economy is currently worth $424 billion, but it is forecast to reach $1 trillion in the next decade. However, seizing this potential requires us to diversify the participants, investments, and partnership models that enable collaboration. Industry, finance, national security, research, and other communities are all scrambling to grow the workforces needed today and build those that will be essential in the future, both for operations in space and on Earth.

An environment such as this is as rich with opportunity as it is competition and cooperation. Countries, as well as companies, are all competing for talent that will drive the innovations we need not just to explore, but more importantly, pioneer cures and solutions for Earth-bound problems that can never afford to be ignored. Precision agriculture, climate monitoring, lifesaving medical technologies, supply chain management, and other Earth-centric dividends may not have been part of the original Gagarin mission plan, but they are part of the reward system that comes from taking that first flight into the unknown.

Gagarin’s words at liftoff, “Poyekhali!” (Let’s go!”), remain the clarion call for an ecosystem that has never been as inviting as it is today. Sixty years later, they are the permanent invitation of whatever it is we will do next and who will make it happen in exploration, in orbit, or back here on Earth.

That’s a legacy we could not have imagined sixty years ago. Fortunately, time and experience have a way of helping us to see those dividends more clearly than we ever did before.

It just takes courage to be first. Let’s go.

Tom Zelibor is CEO of The Space Foundation in Colorado Springs, CO. He wrote this for InsideSources.
All Posts »