Christ: Slight bump in COVID-19 numbers cause for concern, not alarm 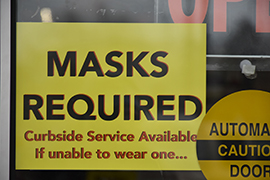 The state health director said Friday that a “very, very small” increase in COVID-19 numbers is cause for concern but not alarm, and should serve as a reminder that people still need to observe health protocols.

Dr. Cara Christ, director of the Arizona Department of Health Services, said that overall progress against the pandemic is still moving in the right direction, with hospitalizations down sharply and totals vaccinations nearing 4 million doses.

The one troubling number – 1,302 new cases reported Friday by the state – was attributed to bookkeeping, with 625 of those cases detected over the winter but only recorded this week. Christ said those tests, from Gila, Graham and Navajo counties, could not be counted before because it was not clear earlier what type of test had been administered.

“So we know that our data can change, but it shouldn’t undermine anybody’s view of the data because we report real time,” she said.

Other data from the department was good overall. Cases and deaths are down sharply from their peaks during the winter, and the number of beds in intensive care unit occupied by COVID-19 patients stood at 9% on Thursday, compared to as much as 66% in early January.

While the number of positive tests has inched up in recent weeks, from 3.3% to 3.8%, Christ said it is a metric that the department is watching but not worrying about yet.

“After reaching a peak of about 19.4% positivity back at the end of 2020 and in the beginning of 2021, we’ve seen a steady decrease, and we are starting to see our percent positivity plateau,” Christ said at her regular briefing with reporters.

Some of the increases are not surprising, she said, as more people venture out and comfort levels increase with vaccinations, school and business re-openings.

“It is expected that, as people continue to come together, we’re going to see more cases,” said Christ, who used the opportunity to encourage people to keep taking precautions like mask-wearing and social distancing.

She spent much of the briefing talking about the state’s COVID-19 vaccination numbers.

Just under 2.5 million Arizonans, roughly 34% of the state, had received at least one dose of vaccine as of Friday, according to the most recent data from the health department. Almost 4 million doses total have been administered, and 1.6 million people are fully vaccinated, according to the state.

With everyone age 16 and older now able to sign up for a vaccination, state officials are continuing to expand vaccination sites.

Christ and Gov. Doug Ducey announced a partnership Friday with Coconino County, Northern Arizona University and Northern Arizona Healthcare to open a state-run vaccination site in Flagstaff. It is scheduled to open April 19.

“We will continue to expand vaccination opportunities throughout the entire state as vaccine supply increases,” Ducey said in statement announcing the site. “These safe and effective vaccines are the way back to normal life and protecting everyone, especially our most vulnerable.”

Other partners include the Arizona Department of Emergency and Military Affairs. Premier Medical will be the primary site operator and will help with the pharmacy and staffing.

“Coconino County is excited to welcome the Northern Region Vaccination Site to our community and to expand vaccine eligibility to anyone 16 and over,” said Kim Musselman, Coconino County health and human services director in a news release.

But while the state is expanding vaccination sites, Christ noted that state-run sites in Yuma and Tucson have seen some vaccination slots go unfilled, an indication that the state “might be coming to our saturation point” in those areas.

She said demand is still relatively high in the Phoenix metro area, but even in the Valley demand is not as high as it was previously, noting that some middle-of-the-night slots at State Farm Stadium are not being snatched up as quickly used to.

“People still want to get vaccinated, but maybe not to the extremes that they were several months ago,” she said.

Christ said that where there is lower demand, the state will work to move vaccines to other areas that are in need.

PrevPreviousOpinion: Lawmakers Want the FDA to Remove Vaping Products From the Market Again
NextArizona’s 10 Safest Cities of 2021Next