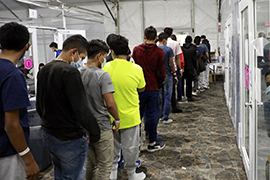 The number of migrants apprehended at the southern border surged in March to one of the highest monthly totals on record, and the almost 19,000 unaccompanied youth stopped there set a record, the latest data shows.

Customs and Border Protection reported Thursday that single adults still made up the bulk of the 172,331 people apprehended at the border last month. But the number of unaccompanied minors doubled from February, to 18,890 in March, while the number of those traveling as families jumped 170%, from 19,587 in February to 53,623 in March.

Immigration analysts said Thursday they were not surprised by the new numbers, which began rising last April. But the surge has become a hot-button topic on Capitol Hill, with Republican lawmakers attributing “Biden’s border crisis” to President Joe Biden’s reversal of Trump-era immigration policies.

Rep. Andy Biggs, R-Gilbert, joined other GOP lawmakers Wednesday for a news conference at the National Border Patrol Headquarters in Texas, where he called on Biden to “own this catastrophe he has created, this human suffering and misery that he has created.”

Among other changes, Biggs called for reinstatement of former President Donald Trump’s Migrant Protection Protocols, the so-called “Remain in Mexico” that forced asylum seekers to wait south of the border while their claims were processed. The administration needs to send a stronger message to migrants that they “cannot come into our country, we will send you back,” Biggs said.

A request for comment from the administration was not immediately returned Thursday, but in recent weeks the White House has mounted a coordinated effort to handle the surging cases at the border.

Biden put Vice President Kamala Harris in charge of working with Mexico and the Northern Triangle countries of Central America – El Salvador, Guatemala and Honduras – to keep people from leaving their homes to head north in the first place. The administration has also promised $4 billion in aid to improve conditions in those countries.

The administration said it is also working to let would-be migrants know that the “border is closed” – most migrants stopped at the border are still being turned back as a COVID-19 precaution.

David Bier, immigration policy analyst at the Cato Institute, called the March surge “totally expected and predictable,” saying that border arrivals always tend to pick up in the spring. He said the current numbers are merely a return to immigration levels seen before the pandemic.

Bier was surprised by the number of unaccompanied minors apprehended at the border, but said it could be driven by families being denied entry and “self-separating” at the border, with the hope their children will be able to enter alone.

Bier said he is concerned with how the government is treating the migrants – detention facilities intended for a few hundred children are reportedly housing thousands – but he added that “the fact that people want to come to this country is not a crisis.”

In response to overcrowding at the processing facilities, the Biden administration in March ordered the Federal Emergency Management Agency to begin building emergency shelters to help house incoming children.

Jessica Bolter, associate policy analyst at the Migration Policy Institute, said the nearly 19,000 minors apprehended last month far outstripped the next-highest month of May 2019, when there were just over 11,000 apprehensions.

She thinks the March numbers may be inflated by Title 42, the public health order that lets border officials expel people immediately after crossing. That could leave large numbers who make multiple border-crossing attempts and are counted each time, she said.

“They’re just sent back to Mexico rather than back to their home countries,” Bolter said. “So there’s more of an incentive to try over and over.”

Bolter linked the surge to a number of causes, including the pandemic, hurricanes that struck Honduras and Guatemala and Biden’s promise of humane treatment of migrants. Without policy changes from the administration or more immigration enforcement in Mexico, Bolter said, arrivals will continue to rise until the summer.

Immigration hawks placed the blame for the rise squarely on Biden’s reversals of Trump’s policies.

Matthew Tragesser, press secretary at the Federation for American Immigration Reform, said in a statement on Thursday that the increase was expected “given the Biden administration’s dismantlement of the nation’s border security and interior immigration enforcement apparatus.”

“This is clearly beyond a usual seasonal increase that the Biden administration continues to falsely say to the American people daily,” Tragesser said.

Biggs and other Republicans have continuously hammered Biden over the border situation, in hopes of attracting voters by the 2022 midterms. Alex Nowrasteh, director of immigration studies at the Cato Institute, said the Republican plan just might work if the situation at the border doesn’t improve.

“Just the fact that the chaos is occurring on the border is enough to make the Democrats look bad,” Nowrasteh said. “And voters do not like chaos at all.”