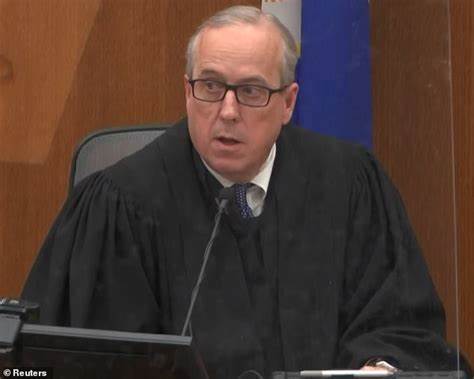 Day Six started with an intriguing but mysterious ruling by the judge that there had been no juror misconduct. He did not say what the misconduct might have been.

Before the jury came in, the prosecution objected to the admission of the entirety of some officer bodycam video. Judge Peter Cahill asked if a particular piece of video was a way to get Floyd’s state of mind in “through the back door.” Earlier, he had ruled that Floyd’s state of mind is not relevant. The judge allowed one video of Officers Lane and Kueng, but not another.

There was also some discussion about admissibility of further prosecution evidence about use of force. Judge Cahill allowed it, but said it must be brief, saying “We’re not going to ask every officer, ‘What would you do different?’ ”

After the jury was seated, it heard from Dr. Bradford Langenfeld, the ER doctor who pronounced Floyd dead. He told the court that he was the primary medical decision-maker for Floyd, and that when Floyd was brought in, his heart was not beating. The primary goal was to get the heart beating again, and to try to find out why it had stopped beating, in case the reason was reversible.

Dr. Bradford had received a message from Emergency Medical Services (EMS) that they would be bringing in a 30-year-old male in cardiac arrest, so the doctor prepared a bay with critical care equipment and prepped a team for Floyd’s arrival. The doctor told prosecutor Jerry Blackwell that, at the time, he had not seen any video of what had happened to Floyd. 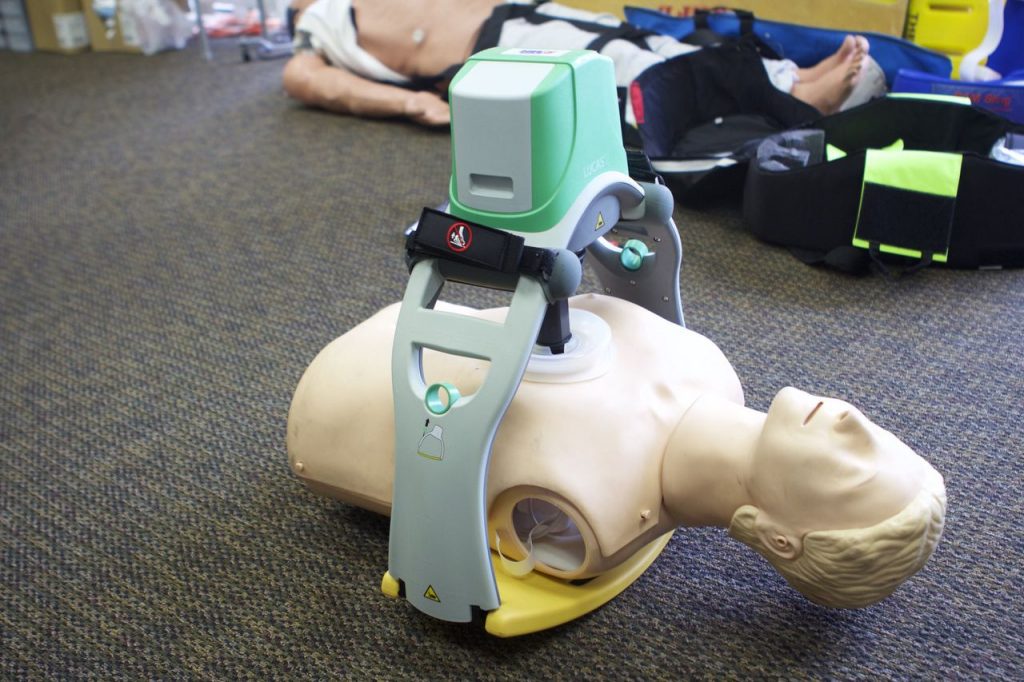 When Floyd arrived at the ER, there was a Lucas machine attached to him, rhythmically compressing his chest to keep blood circulating. The paramedics gave the doctor a report that said they were called to treat someone detained by the police who had facial trauma, and the call was upgraded to an emergency. The patient had no pulse when he arrived. They gave Floyd an airway tube, medication, and CPR. They followed protocol for treating patients with cardiac arrest, and tried to revive Floyd for 30 minutes. The paramedics did not say that Floyd suffered a drug overdose or had had a heart attack. The doctor explained that there is a 10-15 percent decrease in chance for survival for every minute that CPR is not administered after the heart stops beating.

When Floyd arrived at the hospital, his heart had some pulseless electrical activity, which suggested bleeding or low oxygen. The monitor later showed a flat line. Shocking the heart with a defibrillator would not have done any good for a patient in Floyd’s condition. The doctor used ultrasound to rule out possible causes for the cardiac arrest; there had been no internal bleeding. There was no report from EMS that Floyd had overdosed on a specific drug, so the doctor did not consider drug antidotes. The paramedics had not reported typical symptoms of a heart attack, but the doctor said that heart attack could not be ruled out. Dr. Langenfeld ultimately decided that “one of the more likely” reasons Floyd’s heart stopped beating was hypoxia — he did not have enough oxygen.

At the end of 30 minutes, the doctor pronounced Floyd dead. (In Minnesota, only a physician can declare a patient dead.) Floyd’s heart had been stopped for 60 minutes and there was no possibility of resuscitation. The prosecutor asked if death from lack of oxygen is also called “asphyxia,” and Dr. Langenfeld said yes.

Under cross-examination, defense lawyer Eric Nelson asked if drug use could cause hypoxia, and the doctor said it could. Mr. Nelson inquired about Floyd’s high carbon dioxide levels, and whether that could be caused by Fentanyl. Dr. Langenfeld said that it could; the “primary reason” Fentanyl is so dangerous is that is depresses the lungs. A high carbon dioxide level causes shortness of breath, even without stress. The doctor also said that Fentanyl causes sleepiness, and Mr. Nelson said in his Opening Statement that he would produce a witness to testify that Floyd was very sleepy before the police showed up.

The next witness was Minneapolis Chief of Police, Medaria Arradondo. Much court time was devoted to reviewing the Chief’s qualifications, his tenure with the MPD since 1989, and all of the steps as he rose through from patrol officer to Chief of Police. The chief explained how the MPD is structured. The Police Officer Standards of Training (POST) board grants the license to become a sworn police officer, and officers need continuing training to keep their licenses.

On the day George Floyd died, the deputy police chief told Chief Arradondo that someone taken into custody was not expected to survive. After Floyd was pronounced dead, the chief was able to see what happened from footage from a city-owned camera, but all he could see were the backs of officers, and there was no audio. That video showed nothing disturbing. He was not able to see Floyd at all until the paramedics put him on a gurney. Close to midnight, a community member contacted him and said, “Chief, have you seen the video of an officer choking and killing that man?” After that, the chief saw the bystander video.

He reviewed the bystander video and the body cam footage of all of the officers. Based on that, the chief does not think Officer Chauvin followed the MPD’s de-escalation policy, and that restraint should have stopped “once Mr. Floyd had stopped resisting, and certainly once he was in distress and trying to verbalize that.”

All Minneapolis police officers get a policy manual, and are required to know the policies. The jury viewed many pages from this manual, and heard the chief’s opinion that Officer Chauvin violated policy. Both Mr. Chauvin and his defense lawyer were vigorously taking notes during the discussion on de-escalation policy, which the chief defined as “stabilizing situations with the goal of a safe and peaceful outcome.” He said that use of force can be part of de-escalation, or the opposite of de-escalation, depending on the circumstances. The chief also said that de-escalation can include “seeking the community’s help.”

Chief Arradondo talked about the concept of “meeting our community where they are.” He said, “It may be the first and last time they have an interaction with a Minneapolis police officer, and we have to make it count.” Police officers are expected to be able to deal with a wide variety of behavior from people they meet during 911 calls, and sometimes they will encounter someone who will not comply with commands. Police officers have to make their own assessment about whether the person they are dealing with is in crisis, and can be considered an EDP (Emotionally Disturbed Person). “People in crisis may not have brought it upon themselves,” the chief said, adding that those who did bring the crisis on themselves must still be treated according to MPD policy.

Chief Arradondo also said, “We recognize that we are often going to be the first to respond to someone who needs medical attention and so we absolutely have a duty to render that aid.” An officer must request EMS and use his first-aid training. The chief said that Officer Chauvin violated policy when he failed to give aid when Floyd lost consciousness.

Police officers carry Narcan kits. This is an inhaler that helps save someone who has overdosed. Only the Fire Department used to carry Narcan, but since the increase in opioid overdoses, the police have been trained to use Narcan.

On use of force, Chief Arradondo said, “The one singular incident we will be judged forever on will be our use of force. So while it is absolutely imperative that our officers go home at the end of their shift, we want to make sure our community members go home too, and so sanctity of life is absolutely vital.”

Two videos were shown in court, both separately and side-by-side. The side-by-side version matched the timing of the two videos, so you could see the same event from two points of view. One video was taken by 17-year-old Darnella Frazier with her phone and the other was video from Officer J. Alexander Kueng’s body camera. From Darnella Frazier’s perspective, it looks like Officer Chauvin had his knee on George Floyd’s neck — but Police Chief Arradondo agreed that from the perspective of Officer Kueng’s body cam, Officer Chauvin’s knee was on Floyd’s shoulder blade. Up until that moment, the chief said he thought the knee had been on Floyd’s neck.

The last witness of the day was Inspector Katie Blackwell of the police department, who was commander of a training division on the day Floyd died. She said she had known Officer Chauvin for 20 years, and that at one time they had worked the same shift. She said that as a training commander, she had chosen Officer Chauvin to be a Field Training Officer (FTO) to train police recruits.

Documents were entered into evidence to show that in 2016, Officer Chauvin had 40 hours of FTO training for this purpose, and that he took a shorter, “refresher” course in 2018. Miss Blackwell testified that FTO medical training includes CPR, opioids, positional asphyxia, etc. She said that officers are told that a prone handcuffed position can cause asphyxia, so they need to get someone in that position on his side as soon as possible.

She was shown a photo that is a screenshot from bystander video that seems to show Officer Chauvin kneeling on George Floyd’s neck. “This is not what we train,” Miss Blackwell said, adding that she had no idea what technique Officer Chauvin was improvising. The day ended after brief cross-examination by Mr. Nelson.