Opinion: This Isn’t the Great Depression 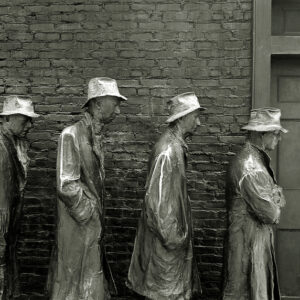 The “Help is Here” tour showcases the third round of national stimulus legislation, and according to Vice President Kamala Harris, the purpose is to “avoid a situation where people are unaware of what they’re entitled to.”

I hope someone meets them along the way and hands off the book “When Helping Hurts.” This fundamental read authored by leaders in community development highlights the harm done when an indiscriminate charity fails to discern true need on an individual level. Certainly, the most recent stimulus package represents another round of indiscriminate charity marketed on the grounds that nearly all Americans need relief. Accordingly, the bill was titled the American Rescue Plan Act and infers we, the people, are in the direst straits.

But are Americans in need of a government rescue?

I run a poverty-fighting gospel rescue mission alongside hundreds of other nonprofits like mine in a national network called Citygate. We know about the work of rescue. From a life of being trafficked, attempted suicide, or a sub-zero winter’s night, we have rescued a lot of people. But, the majority of the poorest who come to us are more in need of encouragement, guidance, and a friend than to be rescued.

Unnecessary rescue diminishes a person’s dignity, and if repeated enough, gives way to a debilitating dependency.

Marvin Olasky in his seminal work “The Tragedy of American Compassion” notes, “dependency is merely slavery with a smiling mask.” In my two decades of fighting urban poverty, I’ve seen just that—indiscriminate aid resulting in the bondage of dependent poverty.

Jocelyn, who manages our emergency shelter, is a good case in point. In a news interview highlighting her successful transition out of homelessness and addiction, she was clear about her dependency on welfare: “It was harder for me to give up food stamps than heroin.”

In his 1935 State of the Union address, FDR noted this tendency to get hooked on government handouts after millions signed up for his New Deal welfare programs: “The lessons of history, confirmed by the evidence immediately before me, show conclusively that continued dependence upon relief induces a spiritual and moral disintegration fundamentally destructive to the national fiber. To dole out relief in this way is to administer a narcotic, a subtle destroyer of the human spirit.”

In one recent interview, President Joe Biden said, “I’m kind of in the position FDR was,” and regarding the pandemic, “I think it may not dwarf but eclipse what FDR faced.”

However, data on economic health reveal an inconvenient fact: March 2021 and March 1933 are quite different.

Unemployment is 6.2 percent now. Then? An all-time high of 24.9 percent. Home foreclosures? At least 1.3 percent – twice that of the first half of 2020 when the pandemic inflicted its greatest economic impact. And in early March of 1933 just before FDR signed the first bill launching the New Deal package, GDP had plummeted 12.9 percent from the previous year. In contrast, the GDP had fallen only 3.5 percent before Biden signed the American Rescue Plan Act.

If Biden insists on comparing the current economic situation to the Great Depression, he should also consider what FDR learned from massively expanding social services. In that same 1935 address, his mind was made up: “The Federal Government must and shall quit this business of relief.”

Unfortunately, there is no such intention in the current legislation: $390 million is designated toward outreach and innovation of the WIC welfare program through 2024, $25 million is designated to improve food stamp (SNAP) technology through 2026, $21.6 billion toward rental assistance will remain available until 2027, and $5 billion in Emergency Housing Vouchers will be around until 2030.

The greatest problem, though, with sweeping rescue-rhetoric legislation is that it shifts our attention toward a paternalistic federal government, rather than creative local solutions, our family members who need support or who can lend it, and to our neighbors in need.

A more apt name for HR 1319 might be, “The American Civil Society Disruption Act.”

For more than two decades, I’ve witnessed how government programs intended to address social ills instead crowd out the private efforts of civil society and disrupt the natural, relational ties vital for families and communities to flourish.

Section 1107 of HR 1319 will reimburse shelters for the meals they serve children, but it will also crowd out private donors and volunteers whose service will seem less necessary. Section 1104 that expands government food commodity by $37,000,000 but ties the hands of organizations to a no-questions-asked mode of charity, will reduce the need for people to come through local food banks that offer more than a handout. I also know from experience the penalty associated with unused Emergency Housing Vouchers (section 3202) will tend to motivate local housing agencies to qualify more people as homeless, perversely incentivizing just that–homelessness.

This bill went far beyond a rescue. It’s a gross expansion and entrenchment of the welfare state. To use the word “rescue” is more than a little disingenuous and though many might be sincerely thankful that “help is here,” a lot of hurt comes with it, too.

James Whitford is co-founder and executive director of Watered Gardens Ministries, a Christian nonprofit organization in southwest Missouri. He wrote this for InsideSources.com.
All Posts »

PrevPrevious43rd annual Prescott Valley Days Parade will take place on Saturday, May 8 at 9 a.m.
NextArizona Weekly Gas Price Update for the week of April 5th, 2021Next