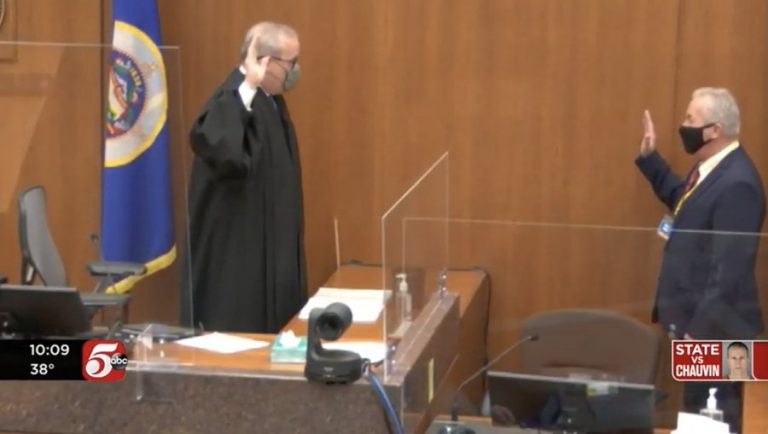 On Friday morning, the prosecution called Lt. Richard Zimmerman, a white man who has been a Minneapolis police officer since 1981. He works in the homicide unit, and one of his duties is to respond to “critical incidents” in which someone dies. He reached the intersection of 38th and Chicago, at 9 pm, after Floyd had been taken the hospital. Police Sergeant Bob Dale arrived and told Lt. Zimmerman that Floyd had died, so this was a “critical incident.” Police put crime-scene tape around the intersection and locked down the area to preserve evidence. Agents from the State Bureau of Criminal Apprehension (BCA) took over, and took both the squad car and Floyd’s Mercedes Benz into custody.

Prosecutor Matthew Frank asked Lt. Zimmerman to explain the “Use of Force Continuum” to the jury. The lieutenant said that this is a Minneapolis Police Department (MPD) guideline for de-escalation, ranging from simply being present at the scene in uniform, to using deadly force. Force levels change according to the threat to the officer. Lt. Zimmerman said he was never trained to kneel on the neck of a handcuffed suspect in a prone position (lying face down). He testified that he received MPD training on the prone position and that the department considers it “deadly force.” When an officer has a suspect handcuffed and prone, he must get him on his side, so he can breathe easily.

According to Lt. Zimmerman, police are trained in some first-aid techniques, and get CPR training every other year. An officer must give first aid, even if he has called an ambulance.

Lt. Zimmerman reviewed the body camera footage of Officer Chauvin kneeling on George Floyd. He told the court that he believed this use of force was “totally unnecessary. . . . Pulling him down to the ground, face down, with a knee on the neck for that amount of time, it’s just uncalled for. . . . I saw no reason why the officers felt they were in danger, if that’s what they felt. And that’s what they would have to feel to use that kind of force.” Prosecutor Frank asked, “In your opinion, should that restraint have stopped once he [Floyd] was handcuffed and prone on the ground?” Lt. Zimmerman replied: “Absolutely.”

On cross-examination, defense attorney Eric Nelson pointed out that the lieutenant had not been a patrol officer for over 20 years, and that tactics and equipment have changed dramatically. He added that although the lieutenant had use-of-force training, he does not teach it to other officers. Mr. Nelson got Lt. Zimmerman to concede several points:

Mr. Frank began his redirect examination by having Lt. Zimmerman testify that he gets the most up-to-date training on use of force. Then he asked about the threat presented by the bystanders. Lt. Zimmerman did not think they were “an uncontrollable threat to the officers at the scene.” He said that the crowd “doesn’t matter. . . as long as they’re not attacking you.”

This was Mr. Frank’s final round of questions:

Mr. Frank: Does “Holding for EMS” excuse the officers from providing medical attention that they’ve been trained to provide?

Lt. Zimmerman: No, it doesn’t.

Mr. Frank: Does it excuse officers from continuing to use the decision-making model for use of force?

Mr. Frank: Did you see any need for Officer Chauvin to improvise by putting his knee on Mr. Floyd for nine minutes and 29 seconds?

Judge Cahill adjourned for the day.