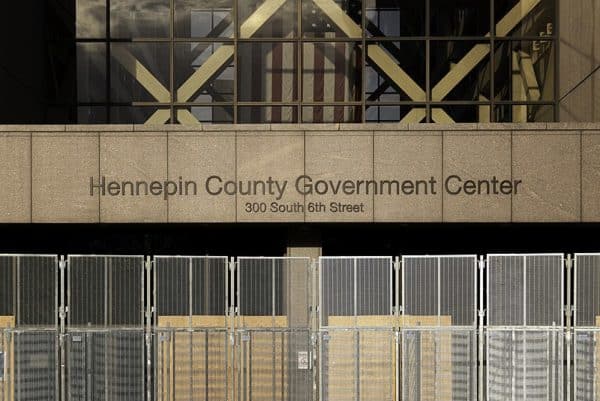 See our coverage of the first day of the trial here, the second day here, and the third day here.

The surprise of the day came when George Floyd’s girlfriend, Courteney Ross, told prosecutor Eric Nelson that she was saved in Floyd’s phone as “Mama,” Floyd’s pet name for her. This raised the possibility that the “Mama” Floyd called for as he was dying could have been his opioid-addicted girlfriend rather than his mother, who died in 2018.

Miss Ross, a 45-year-old white mother of two, got emotional when lawyer Matthew Frank began questioning her. Miss Ross first met Floyd in August 2017, when Floyd was working as a security guard at a Salvation Army shelter. Miss Ross had gone to the shelter to talk to her son’s father, who was staying there, about the child’s upcoming birthday. While she waited for him at the receptionist’s desk, Floyd approached her, saying, “Sis, you OK, Sis?”

Miss Ross did not feel OK and was especially touched when Floyd asked if he could pray with her. They shared their first kiss at that meeting. The couple continued to date, off and on, until Floyd’s death. She said that Floyd was a physically active man who lifted weights every day, did calisthenics at home, biked, and played several sports, especially football.

When asked about Floyd’s health, Miss Ross said that he complained about pain from injuries he had suffered to his neck and his back. She said he never complained about shortness of breath.

Their romance had a dangerous undercurrent. Both were opioid addicts, and Miss Ross described how the couple used drugs they were prescribed and ones from the black market. The pair took oxycontin and oxycodone pills throughout their three years together. In March 2020, Miss Ross took Floyd to the hospital because he was doubled-over with abdominal pains. This led to a five-day hospital stay; she later found out this was because Floyd had overdosed on heroin. When asked in cross-examination if Floyd had been foaming at the mouth when she took him to the hospital, Miss Ross said that there had been a dry, white substance on his mouth.

Miss Ross talked about the two people who were passengers in Floyd’s car when he was stopped by police on May 25, 2020: Maurice Hall and Shawanda Hill. Floyd often bought drugs from both of them. When she was interviewed by the FBI following Floyd’s death, Miss Ross speculated that Floyd obtained the heroin that led to his March 2020 overdose from Shawanda Hill, because he had gotten pills from her before.

March 2020 was a difficult month for Floyd. Miss Ross said that he had been clean and sober at the beginning of the year, but in March, his behavior had changed, and she was suspicious that he was taking drugs again. Then, they fell back into the habit of getting high together. That month, Floyd brought her some pills that looked thicker than the ones they normally took. Opioids usually made Miss Ross feel relaxed, but these thicker pills made her jittery, and kept her up all night.

A week before Floyd died, they got the unusual pills again. Miss Ross told the FBI that this time the thicker pills made her feel like she was “going to die.” She also told investigators that she noticed a behavioral change before his death: There were times when he would be bouncing around erratically and his speech would be unintelligible. The last time she had contact with Floyd before his death was over the phone a day before he died.

The two paramedics who were called to the scene of Floyd’s arrest also testified. Seth Bravinder and Derek Smith — both white men — said they were first dispatched to aid a civilian with a mouth injury. The urgency level was “Code 2,” meaning that the ambulance traveled with no lights or sirens. But en route, the call was upgraded to a “Code 3,” so the lights and sirens were turned on.

After arriving at the intersection of 38th and Chicago, near Cup Foods, both men reported seeing a man lying on the ground with three police officers on top of him. This made Mr. Bravinder think the man might struggle during treatment, but when he looked again, he did not see any breathing or movement. Mr. Smith noticed that Floyd’s chest was not rising and falling. When he checked Floyd’s pupils, they were dilated, and Floyd had no pulse. “In lay terms,” Mr. Smith said, “I thought he was dead.” He told Mr. Bravinder that he wanted to “move this out of here,” so they could begin care in the back of the ambulance. He motioned to Officer Chauvin to move off of Floyd. As Mr. Bravinder unloaded the stretcher, he also noticed a “crowd of upset, yelling people on the street,” and “wanted to get away from that,” and be in “a controlled space” so they could focus their energies on the patient.

A video of the scene shows Mr. Bravinder supporting Floyd’s head as he gets him into the stretcher. He explained that he wanted to keep Floyd’s head from slamming into the pavement, as Floyd was limp and unresponsive. Mr. Smith remarked that the police officers were “very helpful in moving the patient onto the canvas.”

Officer Lane went with them, and the three men tried to resuscitate Floyd, as the ambulance was driven three blocks away from Cup Foods. Officer Lane performed manual chest compressions (CPR). Mr. Smith unclothed and uncuffed Floyd to provide better care. He saw that Floyd had superficial injuries on his nose and shoulder, which would not cause cardiac arrest.

Mr. Bravinder saw a flatline on the heart monitor. With Officer Lane’s help, he placed a Lucas device on Floyd, which does chest compressions to circulate blood throughout the body. He also placed a device down Floyd’s throat to keep his airway free of fluid and help him breathe. A firefighter who had been called to help them also assisted. Mr. Smith administered epinephrine, an adrenaline shot used to jumpstart the heart. Soon after, the paramedics shocked Floyd with a defibrillator, but with no success.

Recently retired Minneapolis Police Sergeant David Pleoger was the last witness of the day. He was Derek Chauvin’s sergeant the day of Floyd’s death. If any of the sergeant’s officers use force, they do a “Force Review” report, which includes interviews with the officer and the victim. Officers have to notify the sergeant after use of force, but there are exceptions. When George Floyd was pronounced dead at the hospital, it became a “Critical Incident,” so Sgt. Pleoger was not involved in reviewing the use of force on Floyd as the review went “up the chain” and was taken over by other administrators.

On May 25, 2020, Sgt. Pleoger received a call from 911 dispatch operator Jena Scurry. Their recorded conversation was played in court. Miss Scurry said on the phone:

“Yeah, they haven’t said anything. Must have been just a takedown, which doesn’t count, but I’ll find out,” Sgt. Pleoger responded. Sgt. Pleoger then called Officer Chauvin on his cell phone. Chauvin said: “Yeah, I was just gonna call you, have you come out to our scene here. . . We just had to hold a guy down. He was, uh, going crazy; he wouldn’t go in the back of the squad.”

Officer Chauvin told the sergeant that he and the other officers had tried to put Floyd in the car and that he became combative. Floyd injured his face while resisting, and after the officers struggled with him, Floyd suffered a medical emergency, so the officers called an ambulance. Officer Chauvin asked Sgt. Pleoger to head to the scene. Officer Chauvin did not say anything about putting a knee on Floyd’s neck or back, but the sergeant testified that a knee to the neck may not be a reportable use of force.

Sgt. Pleoger spoke with all four officers at once. They told him that their suspect had been handcuffed and taken away in an ambulance. He decided to go to Hennepin County Medical Center (HCMC) to check on the suspect, and told Officers Lane and Kueng to stay by Floyd’s car. He told Officers Chauvin and Thao to go to HCMC too but to speak to witnesses first. Officer Chauvin said he could try to, but that they were hostile.

At HCMC, Sgt. Pleoger was taken to the stabilization room, where he saw a Lucas machine doing chest compressions on Floyd. He spoke with a nurse for a condition update, and she said that Floyd was doing poorly. He told a lieutenant about Floyd’s condition, and the lieutenant contacted Internal Affairs.

The lawyers asked Sgt. Pleoger about “positional asphyxia” and he said that MPD officers are trained on the dangers of it. If you leave someone on his chest or stomach too long, he can suffer breathing difficulty. A patient’s own body weight can cause positional asphyxia, even without another person pressing down on the patient. Sergeant Pleoger stated that he felt the police should have ended their restraint of Floyd after he stopped resisting.