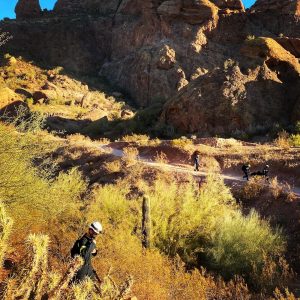 Arizona is not just a desert.

The state boasts six national forests, tied for the ninth-most for any state in the country. Approximately 15 percent of the state’s land is designated as forest, including the largest ponderosa pine forest in North America.

Mountainous grassland and chaparral in the state’s “transition zone” separates the true desert and the woods, creating a paradox in the eyes and mind of visitors.

But some of those who venture into Arizona’s vast wilderness aren’t properly prepared for it. They become lost, run out of supplies or don’t have enough water. And the COVID-19 pandemic has drawn even more people outside, creating more problems.

Enter SPOT, a company that makes satellite communication devices that can make exploring remote areas in Arizona and other places safer, especially for newcomers to the outdoors.

“With (the) trend of more and more people going outdoors because of COVID-19 restrictions, people are not as skilled in doing some of these outdoor activities,” said Denise Davila, corporate communications director for SPOT. “Whether that’s hiking or whitewater rafting or whatever outdoor activity you’re engaging in, maybe you’re a newbie. So it makes even more of a case for having a device like this, because it’s a little bit of insurance.”

SPOT works directly with sheriff offices throughout Arizona to coordinate rescues of people stranded, whether they are hikers, climbers, rafters or other adventure seekers.

“(It’s) tremendously helpful for search and rescue units to determine fairly precisely where the location of an incident is,” said Sgt. Aaron Dick, who leads Coconino County’s search and rescue unit. “We may get a better understanding of, ‘What is the problem?’ Like if somebody is missing from the party, or if we have a search situation, or if there’s an injury or a medical problem or if you’re stuck in the snow.

“That gives us a better idea of what tools we should bring and what personnel (is needed).”

It works like this: SPOT’s hand-held, carriable, satellite-linked devices are connected 24 hours a day, every day of the week, to an international rescue center run by GEOS. It fields calls and determines location coordinates when someone pushes the SOS button on a SPOT device.

The center alerts the closest municipalities to a stranded individual or group, which triggers a rescue response from the local squad.

“There is a potential for two-way communication to help us better understand what the problem is and so we know what kind of resources we need to bring to that situation,” Dick said.

Since January of 2010, SPOT has fielded 165 punches of the SOS button on its devices in Arizona. Of those, 77 were designated as “hiking/mountain sports” rescues. Motor vehicle and medical rescues are next with just 22 and 21 incidents, respectively.

“Specifically in Arizona, as you might suspect, a lot of the activity that we see tends to occur around the national parks area,” Davila said. “So you know, Grand Canyon National Park, Lake Mead, Grand Canyon Village, Saguaro National Park.”

Dick said device activations like those on SPOT systems are rare, but he has seen an uptick lately.

“More recently, it’s on the increase,” he said. “There are more of these devices getting out there and people are buying them. We expect that we will see more activations of these types of devices. In the past 10-15 years, we’ve responded to about 12 PLBs (Personal Locator Beacon distress signals) throughout Coconino County, and in the past few years we’ve responded to six or seven devices.”

Coconino County covers a large swath of Northern Arizona, including Grand Canyon National Park, the San Francisco Peaks, the northern, more remote areas of Sedona, inner Sycamore Canyon and the top of the Mogollon Rim – all vast landscapes with plenty of beauty, but also plenty of potential trouble.

That’s when devices like SPOT can be a life-saver. Davila had multiple examples of hikers, adventurers or even farmers finding themselves in sticky situations all across the country – from Colorado to Montana to California’s Yosemite National Park.

“It’s the type of device that you want to think about like, you don’t want to have it. But in the event that you do need it, you’re very, very grateful that you have it,” Davila said.

Michael Gelfeld, a private tutor and Flagstaff resident, can relate. During a thru-hike of the 2,190-mile Appalachian Trail in 2016, Gelfeld was caught in a blizzard in the mountains of North Carolina.

“Because of some summer commitments I had, I ended up starting that hike in the middle of January, which is very early to get on that trail,” Gelfeld said.

After hitching up to the top of 5,280 foot Albert Mountain, which the Appalachian Trail crosses at the summit and features a forest service road to the top, Gelfeld called the Forest Service, asking for advice and assistance. With the snow continuing to come down, rangers failed to get a snowmobile up the road.

At that point, Gelfeld was stuck. The Forest Service told him to head down an old use trail and attempt to meet up with a ranger at the end of the snow-covered road, but he had little success.

“I didn’t really have a choice,” Gelfeld said. “So I followed their instructions and basically as soon as I went down that trail and left the top of the mountain, I lost my cell phone coverage. The conditions got so bad that I would say within a half mile I lost the trail.

“(So) I’m just out in the woods in a blizzard at that point.”

Accepting his fate, Gelfeld decided to hunker down for the night. He made a small structure with leaves and branches, and bundled himself up into a sleeping bag.

“I fell asleep very frightened but I did go to sleep,” he said.

But just before Gelfeld closed his eyes, he pressed the SOS button on his SPOT device, hoping that someone – anyone – would be able to locate and find him. Knowing the Forest Service was already aware of the situation, he figured people were looking. It was 7 p.m. when Gelfeld drifted off.

“(They) walked right to my position because of the GPS locator,” Gelfeld said.

Without it, Gelfeld said his experience on the trail would have only worsened. His two options were either to hike back up to the summit of Albert, or wade his way through the dense woods. Either would have him trekking through three feet of snow.

“I guess the other option (would have been) to stay put,” Gelfeld said. “(But) there’s no guarantee I would have been found any time soon. So it would have been a pretty difficult spot for me to make a very important decision under stressful conditions.”

Dick worries that technology like SPOT’s can create bad habits among both experienced adventure junkies and outdoors newbies. He believes the devices can provide a convenient excuse for people to take chances or act stupidly.

“These devices shouldn’t substitute for quality training or other preparation,” he said. “I think that’s one of the fears among those involved with search and rescue.”

“I would tell people that the SOS button needs to remain as a last resort kind of thing,” Gelfeld said. “I called the local Forest Service before I pressed an emergency button. Try and exercise resources and really assess your ability to get yourself out of a situation before you press a button that is going to get four volunteer firefighters to walk out in the middle of a blizzard. The people that come rescue you wherever you are and risking their own lives and safety.”

Dick implores people to take proper precautions and heed warnings from Mother Nature so that they don’t end up in situations like Gelfeld’s.

“Evaluate the weather, and be prepared if you get out in the field and things don’t start going well – like if the weather is changing or if the conditions aren’t what you expected,” Dick said. “Do not be afraid to turn around and try again another time, and don’t press on because you had the time off.

“The mountains and canyons will still be there.”