Badgers Pick Up Many Wins On Thursday – PHS Sports Roundup 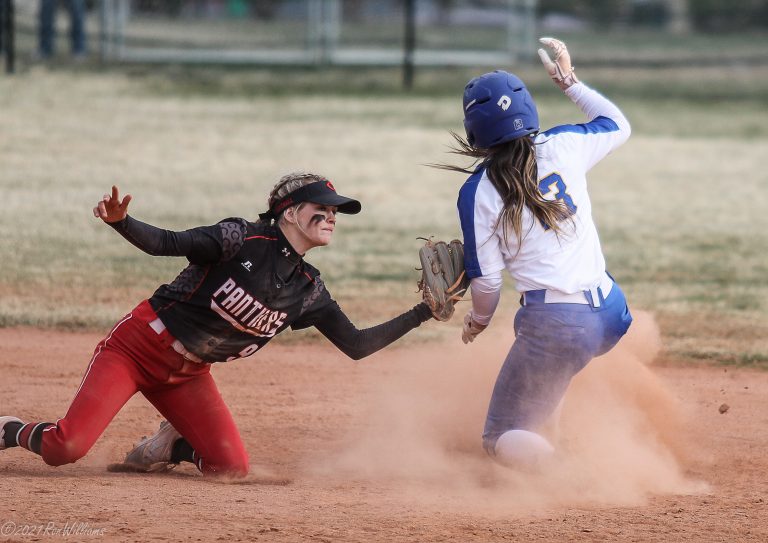 Photo: 13 Makayla Reyes slides into second base as 9 Izabel Pozar attempts to apply the tag. Reyes was called out on the play in the Badgers 12-2 win over Coconino.

The Prescott Badgers remained unbeaten on the season with a 12-2, five inning contest, at Prescott High School yesterday. The teams battled each other on a very windy cool day with a faithful crowd watching on.

Makayla Reyes led the Badgers with a single, triple, and and two RBIs, while tossing the five innings in the circle for the win.

Samatha Rodriquez had a two RBI single for the Panthers. It was a tough day for freshman Hannah Thornsley, who pitched the entire contest for Coconino, allowing seven earned runs with five walks, and a strikeout.

Prescott will host Mohave on Monday at 4 pm.

The Badgers opened up the season by beating the Goldwater Bulldogs 3-1 in the Badger Dome last night.

The Prescott Badgers opened up Grand Canyon Region play with a walkoff 5-4 win on a game ending double by Tyson Potts.

Jacob McElfresh led off the seventh with a drag bunt single, and advanced to second base on a sacrifice bunt by Ty Hubbs. Coconino intentionally walked Elvis Hauptman to put runners at first and second, then the one out double by Potts into he wind in right field, gave Prescott the win.

The four Coconino runs were all unearned as the Badgers committed six errors.

Tyson Potts had three hits, two of them doubles, along with two RBIs to lead the Prescott offense. Jacob McElfresh and Elvis Hauptman each had two hits. Hauptman also had a pair of stolen bases. Peyton Little had an RBI triple.

The Badgers swept the Goldwater Bulldogs 7-0 on a cold windy afternoon in Prescott.

Coach Sterling Fetty said, “Both teams took care of business in the wind. Not a difficult match, but a good one for our newer players to gain some confidence, and more mental toughness for our seasoned players.”

Next up for the Badgers (1-1), will be a visit by the Estrella Foothills Wolves, on Wednseday, at 3 pm.

PrevPreviousOpinion: Restricting Credit Harms People Who Policymakers Want to Help
NextA Trip to the Hospital Leads to a Father and Son Team Getting Busted with a Half Pound of MethNext