The Medical Fraud Case that could Tear a Community Apart: Seeking Justice or Prosecutorial Grandstanding? 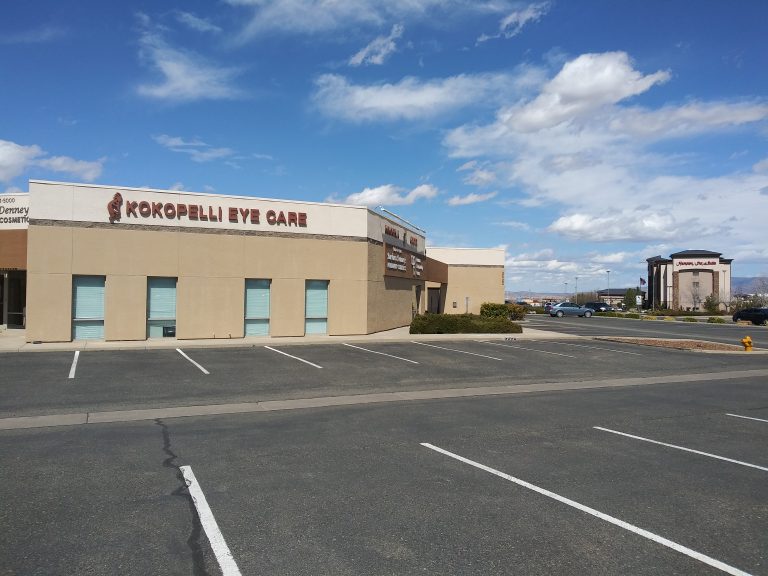 It’s hard to miss seeing Kokopelli Eye Care.  Every local resident and tourist on their way to Prescott, Arizona drives by the large adobe-looking building on Highway 69 near Prescott Valley’s busiest intersection. But the once jam-packed parking lot surrounding the shuttered clinic now sits oddly empty, with a handwritten note on the door stating the business is closed. 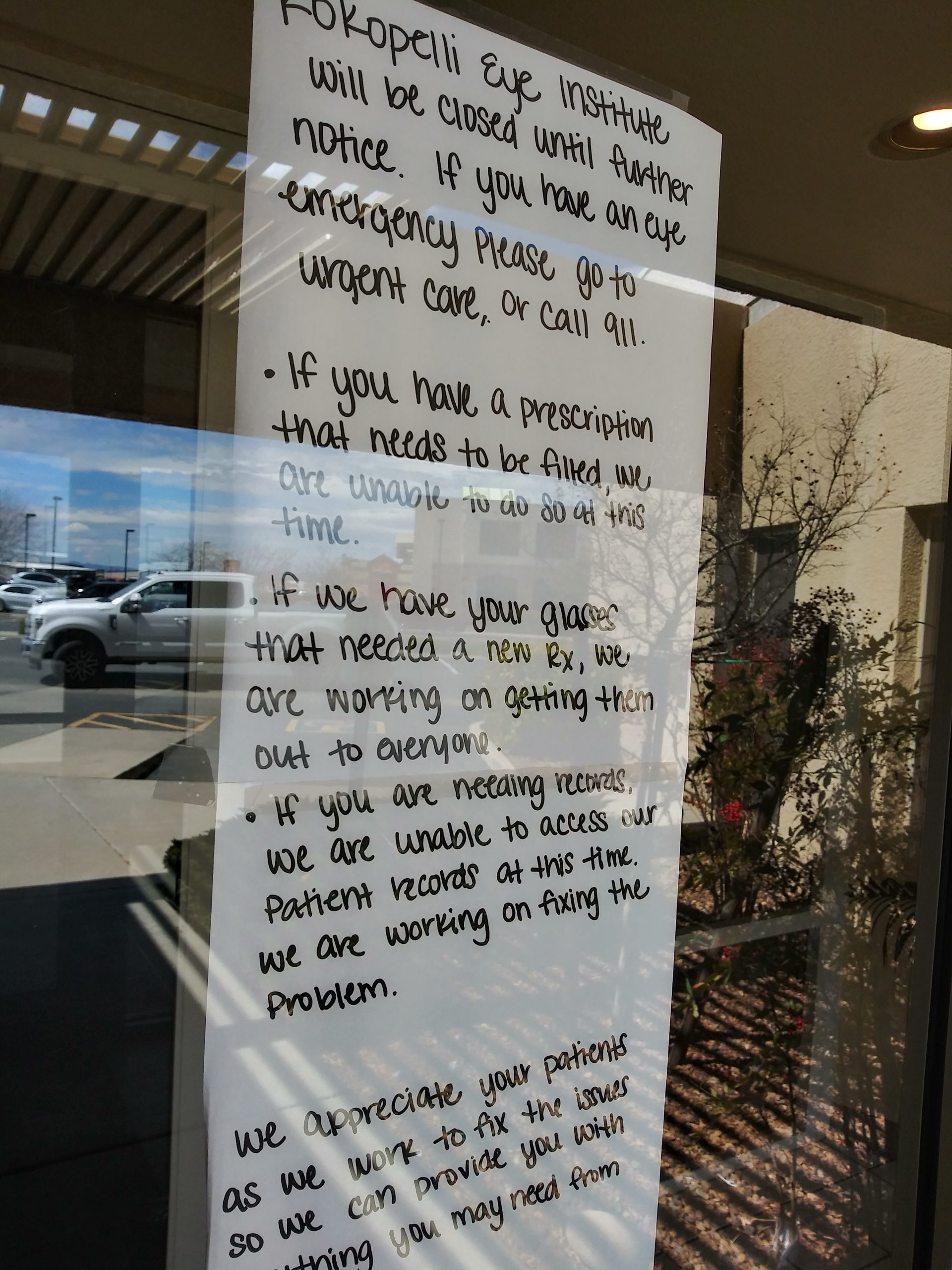 On a good day the 50 chairs in its waiting room were full of patients. But the good days came to an abrupt end for Dr. Michael Ham – owner and chief surgeon for the clinic – and his employees.  On January 2, 2020, Dr. Ham was arrested and charged by the Arizona Attorney General with 150 counts of fraud and conspiracy in connection with the clinic’s billing practices; 47 of his employees have been named in the alleged conspiracy.

The unsealing of the Indictment came with the fanfare of a formal press release from Arizona Attorney General Mark Brnovich and statewide publicity. Throughout the COVID-19 year of 2020, numerous cases in Yavapai County Superior Court were cancelled or placed under strict court COVID rules which included hearing cancellations, or mandated Zoom-style hearings where only the judge and an assistant were in the courtroom.  This slowed the judicial process considerably for many cases.   The Kokopelli fraud case has been an exception.

Dozens of court filings and some hearings in 2020 prompted this reporter and Prescott eNews to begin writing updates on the case, not only because of the numerous federal, state, and local law enforcement officials who are investigating Dr. Ham and his staff, but also because of the case’s potential wide ranging effects on hundreds, if not thousands of Arizona eye patients and healthcare workers throughout Yavapai County and as far north as Kokopelli’s Kingman office.

Complex, multidefendant cases like this one can have serious effects on the families and careers of the employees who were charged with nearly the same 150 count indictment.  One Yavapai County attorney believes this indictment smacks of a RICO overcharge. RICO is of course the Racketeer Influenced and Corrupt Organizations Act and in fact, Count 3 includes a reference to racketeering.

Already the court has granted defense motions to dismiss half a dozen counts for lack of evidence. To be clear, not all of Kokopelli’s employees were charged with all of the counts that include conspiracy,  illegal control and conduct  of a criminal  enterprise,  participating in a criminal syndicate, fraudulent schemes and artifices, theft, taking the identity of another, money laundering, obtaining prescription only drugs by fraud, criminal impersonation, computer tampering and other charges.

We are not listing the names of the employees charged because like all accused persons, they are presumed innocent. This news organization does not want to damage the reputations of health care workers who may be innocent and may have found employment in other venues.  Nor do we wish to taint the potential jury pool in the event the case goes to trial.

An indictment is obtained by government prosecutors from a Grand Jury that hears the government’s side of the case without input from defendants or their attorneys.  An indictment is simply a charging document and is not proof of guilt.  Typically, a copy of an indictment is not admissible evidence at trial. For these reasons, the names of all but the lead defendants have been redacted from the indictment we have attached to this article.

This reporter has spoken with some of Dr. Ham’s patients.  But eNews will not “out them” either.   If any former patients, employees or family members wish to come forward to speak with this reporter or a representative of eNews, we are happy to speak with them and will keep their identity confidential.

One can assume that a case that has been pending for this long has had an effect on Dr. Ham, his family and his livelihood.,  Dr. Ham’s attorneys have asked for and obtained some measure of relief from the court.  They were granted new release conditions which allow him to travel and work again.  This could help him provide for his family and pay his attorneys which include the national firm of Polsinelli, which employs 900 attorneys nationwide, and his local attorney of record, J. Andrew Jolly.

The lead prosecutor for the Attorney General’s office is Brett Harames.  The case is being heard by Judge Debra Phelan.

Local police, one current and one former sheriff’s deputies, and federal investigators have been involved with the investigation but the case is being prosecuted in Yavapai County Superior Court by the Arizona Attorney General.

Dr. Ham, is a short, handsome, in-shape, good natured family man who proudly displays photos of his wife and children in his exam rooms.  He is surely experiencing considerable stress and anxiety as he awaits the outcome of the case.

When asked for a comment, an attorney at Polsinelli declined but another of  Dr. Ham’s attorneys provided this comment to KNAU (the public radio station in Flagstaff): “Dr. Ham is a longstanding and trusted caregiver in the community for more than 20 years …We will vigorously oppose these charges and we believe we will ultimately be vindicated.”

At this point, there is no trial scheduled and the case remains in a pretrial phase with numerous motions pending. Instead of a resolution,  the case is bogged down in case filings relating to discovery issues and disputes over admissible evidence,  witnesses and voluminous investigative reports developed by the Office of Inspector General for Health and Human Services, the Attorney General’s Office,  the Arizona Health Care Cost Containment System,  local law enforcement agencies, the Veterans Administration, Medicaid and Medicare.

It should be emphasized that none of the allegations in what is essentially an insurance fraud case involve allegations that Dr. Ham provided substandard treatment for his patients, nor has the doctor or staff been charged with malpractice in this case.

Dr. Ham’s attorneys filed motions in July and August to dismiss several of the fraud and conspiracy counts and they succeeded in getting six counts of money laundering dismissed. Their argument was that the government’s evidence and testimony presented to a Yavapai County Grand Jury does not constitute criminal conduct or fraud and therefore the indictment is insufficient as a matter of law.  Other charges of money laundering have not been dismissed.   Defense attorneys also prevailed on a motion to return the case to the Grand Jury for an entirely new indictment.  The Attorney General promptly filed a motion asking the judge to reconsider that ruling.

An element of secrecy surrounds this litigation.  Some rulings are known but the Records Clerk in Yavapai County Superior Court will not provide this reporter with a copy of several documents requested.

Much of the case appears to hinge on Grand Jury testimony made available to this reporter purporting to show what a layman might describe as double billing or wrongful billing. For example, Patient X is said to have had two cataract surgeries that were billed to the VA in the amount of $8,756.  But the amount paid by insurance to Kokopelli was $1,756 and $1,757.  A number of similar examples were presented to the Grand Jury. Other claims presented to the Grand Jury included instances where Kokopelli allegedly billed for heart and lung examinations prior to surgery that patients have claimed were not performed.

The prosecution’s witness list includes hundreds of names and includes staff from the Arizona Department of Health Services,  computer forensic experts, the Executive Director of the Arizona State Board of Optometry, eye patients, and more than half a dozen staffers from the Prescott VA Medical Center as well as Kokopelli staff from their Kingman, Prescott, and Prescott Valley offices.  A source for this article said there is a shortage of eye surgeons in Arizona, particularly for the elderly who more commonly experience vision loss.

Dr. Ham was by all accounts an extremely busy and popular doctor, working out of multiple offices and providing services to patients from Maricopa to Mohave counties.  The Corporation Commission currently lists the Kokopelli Eye Clinic as inactive pending corporate dissolution.

When will this case finally be resolved?   When will the multiple defendants who have had their lives upended by the State of Arizona and the hundreds of potential witnesses get closure?  Given the prospect of a new indictment and further pretrial litigation, there appears to be little prospect that the case is going to be resolved anytime soon. But one astute local observer said that a high profile lengthy trial by the Attorney General could work in his favor during the election cycle.

This reporter’s investigation is ongoing.  Documents currently being withheld will soon be the subject of a Motion to Unseal.   Our readers will be updated as additional information becomes available.

PrevPreviousWhy you should get a COVID-19 vaccine – even if you’ve already had the coronavirus
NextNASA gives all clear: Earth safe from asteroid for 100 yearsNext

3 thoughts on “The Medical Fraud Case that could Tear a Community Apart: Seeking Justice or Prosecutorial Grandstanding?”