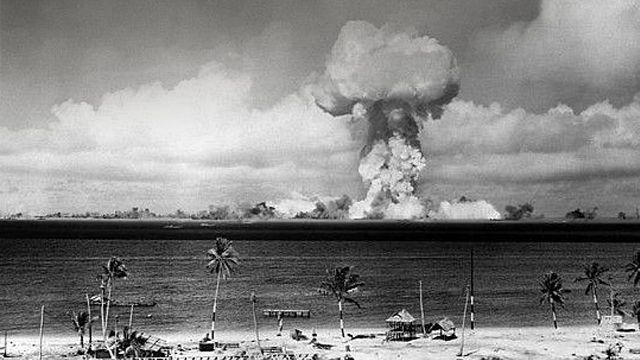 Federal law has long compensated residents who lived downwind from open-air nuclear test sites in the 1950s and 1960s, including many in northern Arizona – but not residents in most of Mohave County.

County Supervisor Jean Bishop, who has seen her family and neighbors racked by cancers, told a House committee Wednesday that this is “a perfect time to amend the boundaries” of the Radiation Exposure Compensation Act to include “downwinders” like herself.

“Over and over my parents were told the testing was safe as our family stood on the front porch and watched in horror as the sky was filled with dust,” Bishop said in testimony to the House Judiciary Committee. “Regrettably the radioactive fallout not only impacted our family but families for hundreds of miles surrounding the test site.”

Her remarks came in testimony supporting the Downwinders Parity Act of 2021, which would amend the RECA to include all of Mohave County and Clark County in Nevada, only parts of which have been covered under the 1990 compensation law. They are the only two counties not wholly included in the coverage.

“Time is running out for these Americans,” said Rep. Greg Stanton, D-Phoenix, lead sponsor of the bill that has two Nevada co-sponsors. “For these families, it is a cruel injustice that ignores the reality they have lived with for decades.”

Under the law, downwinders – or their surviving family members – could apply for compensation from the federal government if they suffered from a specified list of cancers and lived in certain parts of Nevada, Utah and Arizona. The law was amended in 2000 to include uranium miners and workers in uranium mills.

Navajo Nation President Jonathan Nez told lawmakers Wednesday at the hearing that “cancer is now the second-leading cause of disease and death for the Navajo people.” He said Navajo uranium mine and mill workers, ore transporters, and core drillers became ill and died from diseases associated with their work – specifically cancer.

“Navajo people who worked at these mines and mill sites were not told about the dangers to their health until years after the federal government was aware of the health impacts,” Nez testified.

Anyone seeking compensation under RECA must prove that they lived in the areas covered by the law during the time of testing and provide proof of cancer resulting from exposure to ionized radiation. The law recognizes three groups of beneficiaries: Downwinders can receive up to $50,000 in compensation, on-site test participants can get $75,000 and uranium miners and workers can receive up to $100,000.

In Arizona, the law applies to residents of Apache, Navajo, Coconino, Gila and Yavapai counties and to Mohave County residents who live north of the Grand Canyon. Stanton’s bill would make all of Mohave County eligible.

Even if the bill is amended, residents would have to hurry to apply for benefits: The law is currently set to expire after July 10, 2022.

“It’s time for Congress to take a hard look at the boundaries created under RECA so that those living in Mohave County and Clark County can finally receive justice they deserve,” Stanton said.

Bishop said it’s time for all downwinders to be protected.

“While at the time, we were encouraged to celebrate the advances of our government, and we did,” she said. “Unfortunately, we were blind to the fact that the radioactive fallout would kill and sicken numerous members of our family.”