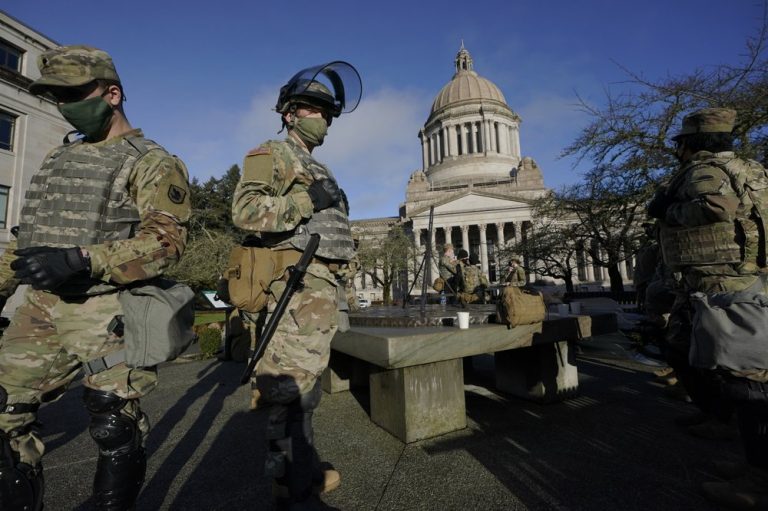 The most terrifyingly banal consequence of January’s siege on the U.S. Capitol is likely to be an unquestioned increase to an already distended defense budget. Indeed, the Pentagon’s recent announcement that 2,300 National Guard troops will remain in D.C. until May has all but assured such a growth.

Despite agreement between unlikely compatriots such as Adam Smith and Mitch McConnell that the troops should go home, Acting Capitol Police Chief Yogananda Pittman went over the Capitol Police Board and petitioned members of Congress directly to extend the deployment. Such a move, she argued, was necessary to combat an increased number of unspecified threats against members of Congress.

The real danger to the nation here is not the apparent specter of conspiracy-laden extremists, however. Nor is it a skyline blighted by razor wire. No, the real danger is line-item justification.

The extension that Pittman’s request brought about will raise the total cost of the D.C. deployment to over $521 million. It will also ensure that the deployment overlaps with the unveiling of the Biden administration’s first defense budget proposal.

To be sure, no one was expecting great strides from current civilian and military leadership in terms of responsible budgeting. As recently as February, planning seemed to indicate that Biden would at least keep the defense budget level, and certainly would not cut it. Now he is almost certain to accept unwarranted increases.

In no uncertain terms, the D.C. deployment can and will be used to justify Pentagon requests for more money in the name of combating domestic terrorism and protecting democracy.

This is not hyperbole. In January, House Speaker Nancy Pelosi convened a task force to review security throughout the capital and make recommendations to “protect our democracy” in the aftermath of the Capitol siege. That task force, led by retired army general Russel Honoré, recommended last week that the Biden administration create a permanent military presence in D.C.

The proposed presence would take the form of a permanent National Guard quick reaction force, placed to assist Capitol Police in any time of crisis. The task force also recommended that the commander of the proposed force be given authority to deploy troops in the capitol without presidential approval in situations where the president could not be reached.

It may be telling then that as Pentagon press secretary John Kirby was telling The Washington Post no one wanted the deployment to D.C. to become permanent, Pelosi’s task force was saying precisely the opposite.

Telling, but not surprising.

Buttressing an already bulging defense budget is the Democratic Party’s ticket to appearing strong without appearing hawkish, to placating military bloat without rocking the fiscal boat. Even without establishing the proposed permanent presence in D.C., the five-month occupation of the nation’s capital has created an ample precedent for a larger-than-anticipated Pentagon ask. Further, so long as the invisible enemy remains right-wing domestic terrorists, the usual anti-war rhetoric from the Democratic Party’s progressive wing is likely to be muffled.

The U.S. certainly needs a healthy defense budget. But drumming up fear at home is not the path to it. Particularly so while the nation is figuring out just how it will pay off the nearly $3 trillion it just spent on stimulus efforts.

Alas, it appears that fear at home is just the ticket this administration needs to ensure its fabled “return to normal.” A pity everyone forgot that the normal they were promised was a runaway defense budget and more than 7,000 American war dead.

Andrew Thornebrooke is executive editor of The Rearguard. He wrote this for InsideSources.com.
All Posts »

PrevPreviousNew Story at Granite Creek Park StoryWalk®
NextPrivacy may be under threat, but its protection alone isn’t enough to preserve civil libertiesNext