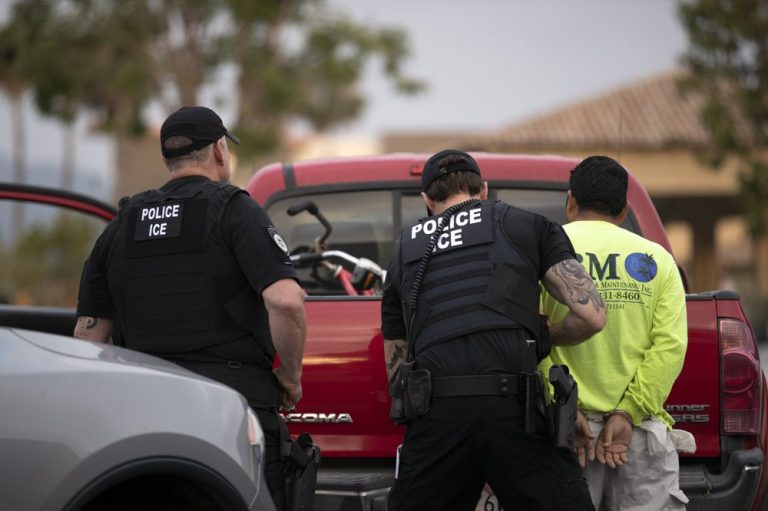 On April 1, 2020, just a few weeks after the first COVID-19 cases were reported in this country, federal immigration agents and law enforcement partners in Los Angeles charged Frank Richard Ludlow, a citizen of the United Kingdom, with smuggling mislabeled substances into the U.S. and marketing them as a cure for COVID.

These cases were just the first in what became a wave of criminal schemes to dupe Americans into buying fake health and safety products to protect from COVID-19.

“It’s monumental, I don’t know if there’s a scale to measure it—the level of fraud we’ve seen since the start of the pandemic,” said Matthew Albence, former acting director of U.S. Immigration and Customs Enforcement (ICE), during a recent roundtable on counterfeiting and PPE fraud.

Homeland security agencies like ICE and Customs and Border Patrol were able to respond with equally remarkable speed, mainly, say officials like Albence, because illegal crossings at the border were largely shut down by Trump administration policies and the pandemic.

Over the last year, ICE has seized more than 2,000 counterfeit COVID safety products and test kits, confiscated nearly $40 million in illicit proceeds, shut down thousands of websites, and made more than 250 arrests under what they dubbed Operation Stolen Promise.

Many of these schemes originated within transnational criminal organizations, either abroad or by operatives who live here, which is why ICE and CBP have taken the lead in cracking down on this problem, making use of powerful immigration authority where foreign citizens are involved.  The success of Operation Stolen Promise is on par with similar success they have had in dismantling immigrant gangs like MS-13, and shutting down birth tourism rackets, diploma mills for fake foreign students, and counterfeit document rings.

Most disturbing are the links between these counterfeit networks and funding for terror organizations like ISIS.

The biggest, scariest bust came last August when the feds seized millions of dollars in cryptocurrency and a website selling fake PPE that turned out to be run by al Qaeda and two other terror groups. Some of their products were destined for customers reselling to US hospitals, nursing homes, and fire departments.

Now that Pres. Joe Biden has lifted most Trump-era border restrictions, however, the tide is shifting back in favor of the smugglers. CBP reports an explosion of both human and drug smuggling, especially of families with children and unaccompanied teens.

Border agents caught more than 100,000 illegal migrants in February, and March’s totals are on pace to surpass prior surges. According to DHS Secretary Alejandro Mayorkas, who has been under fire for failing to mount a coherent response, although most single adults are quickly expelled, most families and all juveniles are released into the U.S., thus fulfilling the promises of the smugglers.

Illicit drug seizures are up by about 50 percent as smugglers count on the Border Patrol being distracted and overwhelmed with processing families and children.

The smugglers even make fake families, just like they make fake N95 masks. In 2019, immigration agents found more than 3,500 cases of fake families, in which young children were rented out to illegal migrants seeking more lenient treatment,  Albence said.

Federal officials characterize the situation as a humanitarian challenge. Most people would say it’s a crisis – but whatever the word, the tools to solve it are within the Biden administration’s control.

First, it needs to unleash the resources of ICE and CBP to combat criminal organizations that are facilitating illegal entry, just as they moved swiftly to mobilize against the COVID-related fraud.

The more illegal migration we tolerate, the more money for smugglers and cartels, the more border chaos contributes to corruption and problems in the migrants’ home countries, says Albence. “It has serious repercussions throughout the landscape and especially in these underdeveloped regions, and then really does become a push factor to bring people to this country.”

Jessica Vaughan is director of Policy Studies at the Center for Immigration Studies, a Washington, D.C., research institute. She wrote this for InsideSources.com.
All Posts »