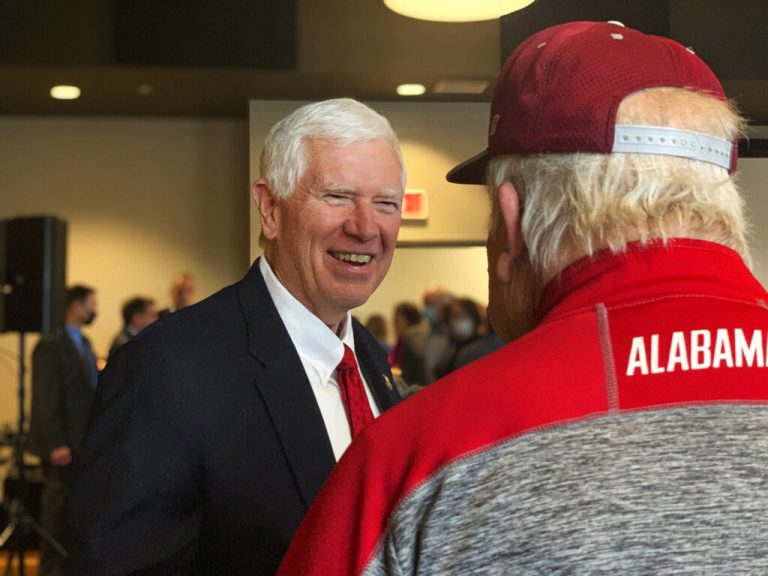 U.S. Rep. Mo Brooks, a conservative firebrand and staunch supporter of former President Donald Trump who has come under fire for remarks he made preceding the attack on the U.S. Capitol, joined the Alabama GOP primary field on Monday to replace Sen. Richard Shelby.

The north Alabama Republican announced his entry into the race at an event with former Trump adviser Stephen Miller. He joins former Trump ambassador Lynda Blanchard in a Republican primary field that is expected to attract a number of other hopefuls.

At his campaign kick-off, Brooks cast himself as a fighter and took equal aim at both Democrats and what he called “squishy” Republicans.

“America can simply not afford senators who cower in their foxholes when the political battles are being fought,” Brooks told a crowd of several hundred people packed into a meeting hall of the Bullet and Barrel gun range in the northern city of Huntsville.

“I am a founding member of the House Freedom Caucus, not the GOP surrender caucus. And as President Trump can vouch, I don’t cut and run. I stand strong when the going gets tough,” Brooks said.

Miller was an influential force in pushing Trump’s efforts to curb immigration. He engineered the former president’s Muslim travel ban and was widely viewed as the driving force behind the Trump administration’s hardest-line immigration policies.

“Nobody has had President Trump’s back more over the last four years than Mo Brooks. Now I need you to have his back. Your vote for Mo Brooks will allow him to carry on the America First agenda,” Miller said as he gave his support to Brooks.

While Miller’s presence was a clear attempt to tie Brooks to Trump, the former president has not yet weighed in on the race. Trump has so far been sparing with his endorsements, although he has made clear he intends to throw his weight around in midterm elections. On Monday, he formally backed a challenger to the Republican secretary of state who refused to help overturn the November election results.

Brooks, 66, has come under fire for telling the rally that preceded the Capitol riot that it was time to “start taking down names and kicking ass.” Brooks said the phrase was intended to fire up the crowd for the next election cycle and is being misconstrued as advocating the violence that followed.

More than two dozen people gathered outside the event, protesting Miller’s appearance and arguing that Brooks does not represent Alabama. Some carried signs reading “Traitor Mo has got to go” and that “Mo Brooks words incited violence.”

“I do think he was inciting a riot. A riot is what happened,” said Catherine Hereford, 42, adding that Brooks is not solely responsible for what happened but that his words added fuel to the fire.

Shelby announced earlier this year that he would not seek reelection in 2022, igniting what is expected to be a messy GOP primary at a time when the national Republican Party is trying to chart a direction following Trump’s departure.

Brooks has served five terms in the House, where the former prosecutor joined the conservative Freedom Caucus. He serves on the Armed Services Committee and Science, Space, and Technology, two important committees for his north Alabama district.

Cassandra Voutchas of Huntsville, said she liked the fact that Brooks objected to the certification of President Joe Biden’s win and his views on the border. The daughter of a Greek immigrant said she believed immigration to the country should be done the “right way.”

“He was the first one to challenge the vote of the President, and of course he is getting a lot of negative garbage because he did that. There are protesters out there tonight because of that. But he is a very strong Christian man, and he loves this country and he loves Alabama,” she said of Brooks.

Republican hopefuls in a state where Trump won 62% of the vote are expected to try to convince primary voters they are the rightful banner carriers for the Trump agenda. Republican former Rep. Bradley Byrne of Alabama said the winner of the GOP primary will likely be whoever can convince voters they are the best heir to Trump and his “Make America Great Again” agenda.

As a likely harbinger of how much Trump loyalty will factor in the race, someone paid for a sign outside the announcement noting that Brooks had criticized Trump before his 2016 election. Brooks was the state chairman for Sen. Ted Cruz’s election campaign.

David Mowery, an Alabama-based political consultant, said support for Trump is “the table stakes” — a requirement to get in the game for Republicans seeking office in Alabama. However, Mowery said he thinks there is trepidation among establishment Republicans.

There is so far not an announced Democratic candidate in the race.

“I think people are worried that you are going to get someone that’s more concerned about throwing bombs and seeing their name in the paper than somebody who does what Shelby does and that is bring home the bacon and make sure Alabama is taken care of in every spending bill,” Mowery said.