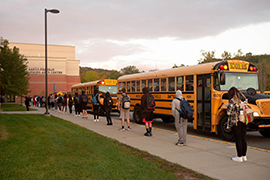 Arizona school and health officials welcomed Friday’s announcement that COVID-safe social distancing for students can be reduced from 6 feet to 3, but they did not appear to be rushing to embrace the lower standard.

The Centers for Disease Control and Prevention said it issued the new guidance after studies showed that COVID-19 “spread remains low in schools that adhere to consistent mask use and layer other prevention measures.”

But Arizona Education Department spokesperson Richie Taylor the revision came at an awkward time for Arizona schools, many of whom reopened this week or are preparing to do so after their spring breaks end Monday.

“Schools that are reopening already have their mitigation plans in place” and would not be able to change them in adherence with the guidelines immediately, Taylor said.

That’s the case in the Phoenix Elementary School District, where schools only just reopened Wednesday.

Linda Jeffries, marketing and communications director for the district, said the schools would continue imposing the 6-foot standard on students for now, and would determine after a few weeks of classes whether it can go to 3 feet.

“What we decided this week was that we are going to keep our mitigation plan that we have right now,” Jeffries said. “We would like a little more time with kids on campus to make any changes.”

While schoolkids can follow the 3-foot rule, teachers should still keep their distance, according to the CDC, which said that the higher chance of spread between adults means they should stay 6 feet from each other.

Schools across the state scrambled to reopen after Gov. Doug Ducey’s March 3 order that schools reopen by this week or next, giving many districts less than two weeks to prepare for a return to in-person learning.

Ducey’s order called for a phased reopening based on the level of COVID-19 transmission in each county, as determined by the Arizona Department of Health Services. All schools would reopen in counties with low or moderate transmission rates, while counties with substantial transmission rates would be allowed to limit attendance in middle and high schools to allow for greater social distancing.

All reopened schools were expected to observe COVID-19 safety protocols, like mask-wearing and social distancing, and parents had the option to keep their kids home for virtual learning.

As of Friday, every county in the state was rated substantial or better, according to the state health department. Four counties – Cochise, Graham, Yavapai and Yuma – had moderate transmission rates and Greenlee County had a low transmission rate.

Dr. Cara Christ, the director of the state health department, said schools have been doing a good job following COVID-19 safety measures in classrooms so far, but she said the new CDC guidelines are still “a great thing for schools.”

“We have not seen significant transmission within the classroom, so we think this is encouraging,” Christ said.

Outside the classroom the spread of the disease has diminished since a spike in the winter, with COVID-19 infections and deaths on Friday reaching their lowest point since the fall. There were 423 new cases and 46 deaths Friday, according to state data.

At the same time, vaccinations in the state have been steadily climbing. Christ said that more than 1.7 million Arizonans, or 24.1% of the state’s population, had received at least one dose of vaccine by Friday. More than 1 million people in the state are fully vaccinated, state health department data show.

The CDC guidelines vary by age. Elementary schools are able to lower social distancing requirements under the new guidance, while it is recommended that middle and high school students move back to 6 feet if their communities have a high spread of the virus.

Jasmine Reed, a CDC spokesperson, said that’s because young people, especially those under 18, are less likely to fall ill if they are infected with COVID-19.

“Children and adolescents who have COVID-19 are more commonly asymptomatic (never develop symptoms),” Reed said in an email Friday.

Her email said the decision to issue new guidelines was based on studies showing “spread remains low in schools that adhere to consistent mask use and layer other prevention measures.” One constant regardless of age group was the need to continue those other safety protocols – sanitizing, handwashing and mask-wearing, among others.

Even before the new guidelines were issued, Jeffries said a slight majority of parents in the Phoenix Elementary School District felt comfortable sending their children back to the classroom, according to a poll the district conducted.

“58% of parents chose to send their children back in-person, while 42% decided to keep them online,” Jeffries said.