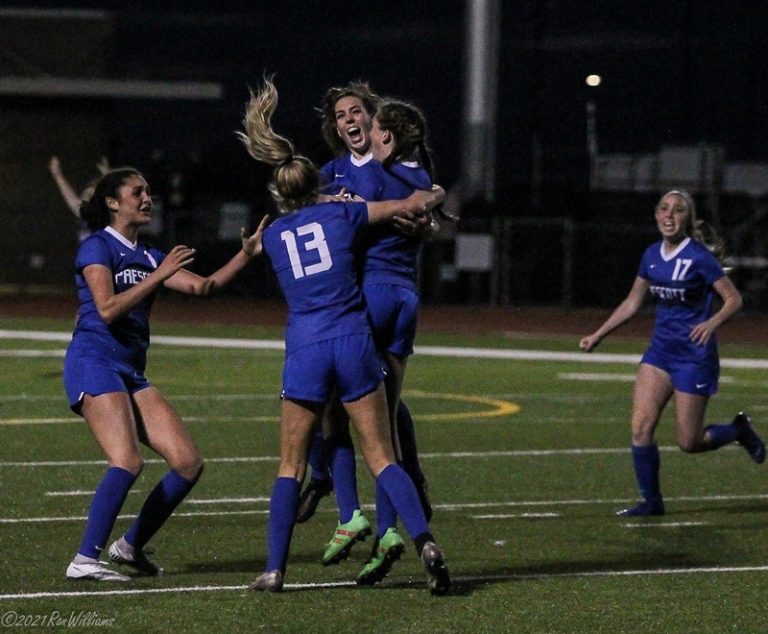 Photo: The Badgers react after the goal of Nicole Raiss in the final minutes of overtime.

The Prescott Badgers came from behind in overtime to slip past the Flagstaff Eagles 2-1 last night at Bradshaw Mountain High School. The vocal fans in attendance were treated to a physical thriller, that became more intense as the game proceeded.

Prescott Coach Paul Campuzano said, “I’m so relieved for them. Every single girl, even the ten seniors who graduated from last year’s team are a part of this. These girls have put in the time and effort, working so hard, and they deserve this.”

The win puts the the top seeded Badgers into the title game against Salpointe Catholic from Tucson. The game will be played at Coronado High School in Phoenix, on Saturday at 4:30 pm.

After playing 80 minutes, with both teams on the verge, but not getting that one needed goal, the teams headed to overtime. Flagstaff scored first when Cece Garcia slipped the first goal of the game just past the outstretched arms of Badger goal keeper Charlotte Osburn. The Flagstaff faithful erupted as the Eagles led in the first overtime session 1-0, with 4:21 on the clock.

A two minute break gave Prescott a chance to regroup. Campuzano said, “We just needed to settle down a bit and put a new wrinkle into the last ten minutes. So I had to take a chance. It didn’t matter to me if we lost 3-0, but 1-0 would have broken my soul.”

Kari Kasun got the equalizer with 6:27 left to tie the game 1-1. The Badgers all of the sudden had the momentum, and it carried over as Nicole Raiss scored what turned out to be the game winner a few minutes later.

Kasun said, “This team has so much grit and we know we can pull together in the hard moments. The one thing that really helps us is that we pull together when things get tough, and not apart, which I think separates us from other teams. We have no quit in us, and when we got behind, we knew we had to fight harder.”

When asked about being down 1-0 going into the final ten minutes, sophomore Elle Long said,  “We were all nervous and uptight, we’ve been working so hard this season, we knew we had to band together and get stuff done, and with that mentality we knew we could do it.” About the physical part of the game, “ I like the physical games much more because the physicality keeps you  more focused on the game. It is harder to play teams that don’t bring that to the game. We know that Flagstaff likes to play at the same physical level that we do, so it is just a matter of outscoring them.”

The game winner came off the foot of Nicole Raiss with just over a couple minutes left. Raiss said, “This is the third time in a row we have beaten Flagstaff, and we know how physical of a game this would be. We were planning to go for the eighty minutes, we just had to play a little more. Once we got the tie, it was just a matter of getting one more.”

The Eagles put a lot of pressure on Badger goal keeper Charlotte Osburn most of the game, resulting in numerous saves by the junior. Osburn said,  “I have an amazing steady team out in front of me, that really put faith in me, knows my abilities and enabling me to keep the ball out front.” On going to the championship, Osburn added, ”It feels great it. It shows how well we are working together and persevering together among our challenges.”

Campuzano added, “It feels so good to get to the championship, we just need to finish.”

The Prescott Badgers season came to end on Wednesday night, as the Walden Grove Red Wolves pulled off a mild upset, in a 1-0 win at Scottsdale Christian Academy.

Coach Phil Reid said, “It was a good season. The boys gave their all and I am proud of them.”

The Badgers (13-1) went into the game as the number two seed, while the Red Wolves were at number three.