Sharpen your pencils: Many Arizona schools reopen for in-person instruction 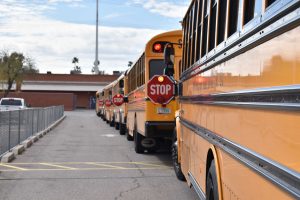 Schools across the state reopened Monday, and many were offering in-person instruction for the first time since being shut down by the COVID-19 pandemic last year.

Superintendent of Public Instruction Kathy Hoffman expressed confidence that things will get back on track for students this year.

“But by and large, the majority of our schools across the state will be offering in-person, either starting today, starting next week or by the end of March,” Hoffman said in an interview with KTAR News Monday.

This reopening was prompted by Gov. Doug Ducey’s March 3 executive order that requires schools to offer in-person instruction for students who want it. This change, however, is not mandatory. Students who wish to remain fully remote can do so.

Parents, teachers and students voiced concerns or enthusiasm, or a mix, for returning to schools. One conflict in Tempe arose last month when parents pooled funds to advertise on a billboard, calling on schools to reopen.

“What I’ve seen is a lot of disrespect,” said Amanda Steele, a parent in the Tempe Union High School District. “Last month, there was a billboard that was posted towards the Tempe Union High School District stating that the district was failing our students, and our district has definitely followed the science and the metrics, but they are not failing our students.”

For some districts, such as Mesa Public Schools, Ducey’s executive order made no difference. The Mesa district began offering in-person instruction in September, according to an email from communications director Heidi Hurst.

For others districts, especially smaller ones, meeting the order is more involved.

“We are now officially at 50% of our district will be remaining remote through the end of the year,” Gabriel Trujillo, superintendent of the Tucson Unified School District, said during a virtual meeting March 11. “Another 42% have selected to come back to on campus learning at their respective grade level and, of course, we are still waiting on 8% of our families.”

Trujillo said educators are looking at a target start date of March 22, after spring break ends. Whether everyone will be coming back versus staying remote is still to be determined.

For some Arizona educators, the executive order didn’t come as much of a surprise. Beth Lewis, executive director of Save Our Schools Arizona, which advocates for stronger schools, said the order hasn’t had much of an impact. Lewis, who has been teaching fifth and sixth graders for the past 10 years, said school boards already have been planning for reopening and are ready for any changes that come.

“Our school boards, I think, are really representative of the whole state where they’ve been watching local data and using local control to make local decisions and listening to you know, local parents,” Lewis said. “So the governor’s executive order was really kind of a nothing burger for most districts.”

Danielle Pollett and other parents are raising concerns about the pressure educators are under.

“I think, educators and our school staff are feeling a lot of pressure, right now, and it makes me really sad as a parent and a lover of teachers to know that they’re under so much stress in order to make our lives as parents a little bit easier,” the Mountain Pointe High School parent said.