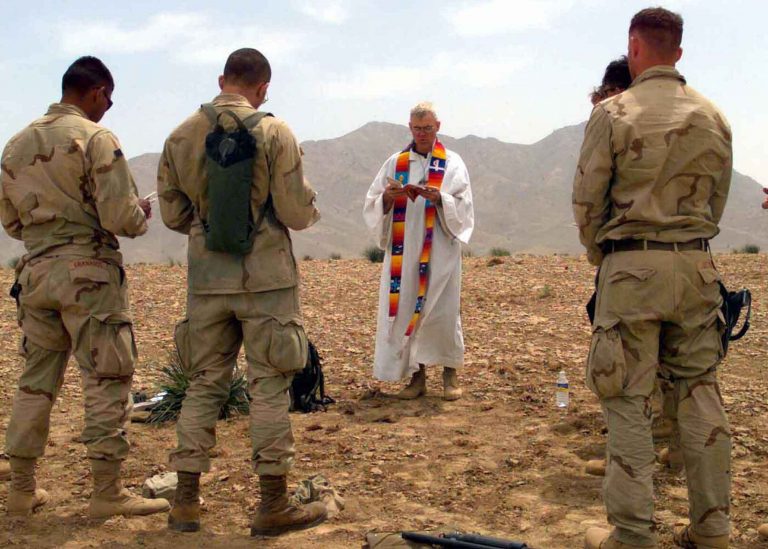 At the end of a small cemetery on the campus of the College of the Holy Cross, the Jesuit college where I teach, is the grave of Joseph O’Callahan, former professor of mathematics. O’Callahan is one of the few Catholic military chaplains to have been awarded the Congressional Medal of Honor, for his heroic actions during World War II.

Only five Catholic priests have received this highest American military honor. Two of them are in the process of being considered for the highest honor recognized in Catholicism: becoming a canonized saint. They are Vincent Capodanno, a Navy chaplain killed in Vietnam while assigned to a Marine unit in 1967, and Emil Kapaun, an Army chaplain who died in a prison camp during the Korean War in 1951 – and whose remains were recently identified by the Pentagon.

What interests me as a specialist in medieval liturgy and worship is the connection between military bravery and spiritual heroism.

Kapaun was captured while ministering, unarmed, to wounded and dying soldiers in active battle. His fellow soldiers lauded the way in which he continued to assist other prisoners before dying of pneumonia in the prison. He was awarded the Medal of Honor posthumously in 2013.

Kapaun’s spiritual heroism was also noted by those he served. A preliminary evaluation of his sanctity, or “cause” for canonization, was accepted by Pope John Paul II in 1993, and he was proclaimed “Servant of God.” It is not unusual for decades to pass before this approval; in fact, a mandatory five-year waiting period has become a first step in the formal process of becoming a saint.

After this, officials in the Diocese of Wichita, Kansas, Kapaun’s home, spent several years conducting a thorough investigation into his life and ministry. A final report, called a “positio,” was accepted and approved by Vatican officials in 2016. Now the pope must decide on declaring Kapaun “Venerable,” the third step toward canonization.

It might seem unusual to associate priestly ministry with the violence of war. In the early first century, Jesus himself preached peace and nonviolence instead of retaliation.

In some early Christian communities during the second and third centuries, soldiers could be accepted as candidates for baptism, the ritual immersion in water necessary for becoming a member of the church, only if they refused to kill other human beings.

Christianity as a religion was illegal in the Roman empire during these early centuries. However, at the beginning of the fourth century, Constantine, a military commander, became emperor and legalized Christianity throughout the Roman Empire. By the end of that century, Christianity had become the official religion of the empire.

But a Christian empire still needed to wage war and spill blood to survive. During this time, the theologian Augustine began to develop what came to be called the “Just War Theory.”

In the 13th century, theologian Thomas Aquinas provided further explanation of how ordinary lay Christians could, under certain conditions, engage in warfare. A war had to be declared for just reasons and conducted by the appropriate authorities. The “legitimate” killing of enemy combatants was accepted by Christian bishops and the popes for several more centuries.

However, the role of bishops, priests and other ordained clerics in warfare was less clear, because actual practice did not always reflect theological ideals.

During the Middle Ages, this Just War theory was not always followed in the heat of combat. Before the 12th century, it was not uncommon for armed bishops to lead troops personally into battle and fight themselves.

Priests, too, could be called into military service. However, the decrees of local Christian councils continued to forbid clerics from carrying weapons and shedding blood.

Even in the later medieval period, the question of bishops and clerics serving in the military was muddled. Priests did accompany Christian armies to provide moral and sacramental support. But certainly, priests and monks, like the influential abbot and spiritual author Bernard of Clairvaux, took active roles in preaching in support of wars against heretics and Muslims as well.

These religious wars, the Crusades, took place between the 11th and 15th centuries. Popes such as Urban II and Innocent III would call for Crusades to the Holy Land or areas of Europe led by dissident secular rulers.

Aquinas himself offers two apparently contradictory opinions on the role of clergy in wars. He concluded that they could not fight as soldiers because they would be obliged to shed blood, but elsewhere he defended the founding of religious orders of soldiers who would fight to defend the church and the poor. Most members of these orders did take religious vows but were unordained laymen.

Even in pre-Christian times, religious figures accompanied armies to the battlefield and offered sacrifices and blessings for their victories. This continued to be true in medieval and modern Europe, and later, in the United States.

Catholics already venerate one saint as the patron saint of military chaplains. He is St. John of Capistrano, a 15th-century lawyer and politician who became a Franciscan friar and a famous preacher.

Nicknamed the “Soldier Saint,” he personally led troops into battle at the city of Belgrade in an effort to stop the advance of a Muslim Turkish army into Europe.

However, John of Capistrano is also hugely controversial. His assumption of a military role was criticized because some found it inappropriate for a priest. His constant campaigning against the Jews reinforced existing hostility, leading to legal restrictions, anti-Semitic violence and forced exile for many Jewish communities in parts of Germany and Poland.

In the contemporary American military, regulations require that chaplains go unarmed into combat; international law states that they may not be treated as prisoners of war if captured, but must be treated with respect and released.

Apart from actually using weapons against enemy forces, military chaplains share the experiences of other soldiers. Many come under fire themselves, risking their own lives on active battlefields to minister to the dying and rescue the wounded. Their service is to all personnel regardless of differences in faith or religion – for example, in conducting funeral rites.

For many Catholics, Kapaun’s selfless actions during combat and imprisonment would demonstrate extraordinary heroism, not just in fighting the armed enemies, but also in what the Vatican calls “offering of one’s life” for other human beings.

With the recent official identification of Kapaun’s remains, the next few stages to sainthood may proceed more quickly. Diocesan officials note that part of the process involves exhuming and securing the candidate’s body, which had not been possible for Kapaun until the return of American POW remains from their mass graves.

For the moment, perhaps his work as a Catholic chaplain could offer a resolution to a centuries-old paradox: the pragmatic goals of military service and the Christian call to a life of ultimate peacemaking.

PrevPreviousHow urban planning and housing policy helped create ‘food apartheid’ in US cities
NextOpinion: Phones Are Better and Better, But Nobody Is Making CallsNext