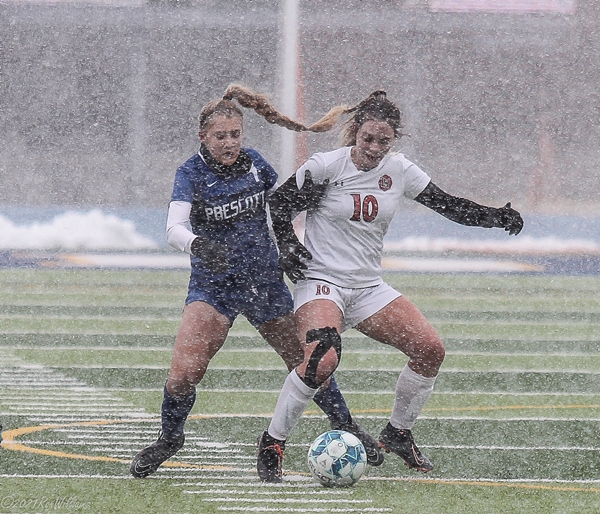 Photo: Prescott’s 4 Emma Stover tangles with 10 Mackenzie Cathey in the first half of action in the Badgers 4-1 win.

The Prescott Badgers moved another step closer to their goal of winning a state championship, with a 4-1 win over the visiting Lee Williams Volunteers.

The game was played on a cold windy and often snowy afternoon at Prescott High School.

The Badgers finally were able to score on a goal by Rieley Petkovich with the assist going to Kari Kasun at the 16:38 mark, after numerous failed attempts leading up to that.

Nicole Raiss got  fouled hard with 2:15 left in the first half, and was awarded a penalty kick. Raiss succeeded for a 2-0 lead at the half.

The third Badger goal came on a fluke play, when the Lee Williams goal  keeper misplaced the ball, leaving a slight opening to the ball and the goal, which Kari Kasun took full advantage of with 37:41 left in the game. Kasun added another goal a few minutes later and Prescott led 4-0.

The crowd became more involved in the second half, due to some of the calls being made by the lead referee. This resulted in the referee to stopping the game, and a fan being removed for saying, “You’re the worst ref in the league.” Another fan said afterwards that he thought the referee overreacted and that it was not needed, and took the focus off the girls and the game being played.

The play in question was when Mackenzie Cathey of Lee Williams was coming with the ball to the Badger goal, and Prescott goal keeper Charlotte Osbourn made the decision to challenge Otero  rather than set up in front of the net. A collision by the two awarded Osbourn a yellow card, and she had to leave the game, that brought freshman Lia Kileen off the bench to try and preserve the shutout. Cathey made a smooth move to get the ball past Kileen for the only Volunteer goal with 19:46 remaining.

The Badgers and Volunteers played out the final minutes with neither team scoring, leaving Prescott with a 4-1 win.

Nicole Raiss said, “We are kind of used to this weather, since we had to play in the snow a year ago. We were a little off at first but got it together. It was  physical out there today, and you just have to play through it.” On her penalty kick goal, Raiss added, “I just play the shot through my head and see how I want it to go. If you don’t play it in your head you’re never going to get it in.”

Coach Paul Campuzano said, “I thought we were solid through the first half, but the trick part is when you get a lead. We made two mistakes, one led to the penalty kick, and the other one led to a close play in the back. It was just frustrating that they would turn off like that, and we had about a 15 minute stretch where we were really bad. It is something we will talk about on Monday. I know it is the weather and it’s cold, but there is really no excuse. We may not get away with that in the semifinals.”

Lee Williams ends a good season at (9-4), while the #1 Badgers (13-0) move on to face another Grand Canyon Region foe, the Flagstaff Eagles on Tuesday at 4 pm. The game will be played at Bradshaw Mountain H.S. in Prescott Valley.

The Prescott Badgers advanced to the Division 4 semifinals with a 3-0 win over the Flagstaff Eagles.

The teams battled in the first half with nothing to show for their efforts on the scoreboard. Prescott got the offense going, by  getting a pair of goals by Brayden Nelson, and another by Edgar Martinez, to get the 3-0 win.

Flagstaff, who made it to this game after receiving a forfeit win over Cortez, had nothing to show for their efforts thanks to the great Badger defense, and goal keeper Lance Scalabrine.

Badgers Coach Phil Reid said, “It was good to move on to the next round. The team played well and for each other.”

Prescott (13-0) and the number 2 seed, will make a trip to Scottsdale on Wednseday, to face Walden Grove at 4 pm.