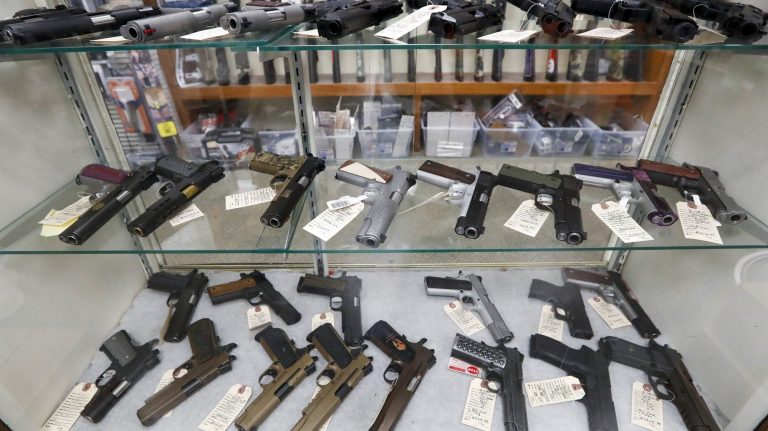 An escalation in firearms sales last year, driven in part by new gun owners, is prompting some health experts to call for more attention to gun safety and the relationship between owning weapons and injuries or suicide.

In 2020, the FBI processed a record 39.7 million firearm background checks, one of the best measurements of likely sales. The week of March 16-22 – just after COVID-19 was declared a global pandemic and then a national emergency – is the top week for background checks since the agency’s instant system launched in November 1998.

The National Shooting Sports Foundation, a trade association for the firearms industry, estimates more than 8 million people were first-time gun buyers last year, and experts cite pandemic-related worries, as well as the presidential election, as primary drivers of rising sales.

Researchers from the University of Pennsylvania’s Perelman School of Medicine are among those calling for action to help prevent firearm injuries or deaths amid the uptick in purchases.

More safety education “is essential to address the potential downstream adverse effects of increases in firearm ownership with regard to injury and suicide prevention,” the researchers wrote recently in JAMA Network Open.

They pointed to one study that found some California gun owners had begun using less safe storage practices during the pandemic, choosing to leave weapons loaded and unlocked. Respondents cited concerns about pandemic-prompted lawlessness or prisoner releases, along with government collapse, as some reasons for their purchases.

Experts note that the rise in gun sales coincided with increasing psychological distress caused by isolation, economic worries and health concerns related to COVID-19. Studies show that depression, substance abuse and suicidal thoughts all have worsened during the pandemic.

A study in the Journal of Psychiatric Research surveyed 3,500 Americans last June and July about their intent to buy firearms, and found that those who said they planned to do so had experienced more severe fears around COVID-19 and were more likely to have had some kind of suicidal ideation in the preceding year.

“The 2020 firearm purchase surge does not guarantee a subsequent epidemic of suicide deaths, but it most definitely increases risk,” wrote authors Craig Bryan, a psychologist who directs trauma and suicide prevention programs at Ohio State University, and Michael Anestis, executive director of the New Jersey Gun Violence Research Center.

Gun violence is one of the most pressing health crises in the country. In 2019, nearly 40,000 people died by firearms – the majority in suicides, according to the Centers for Disease Control and Prevention.

Arizona’s gun death rate was about 27% higher than the national average in 2019, according to CDC data, with 1,136 deaths by firearms that year – 70% of them suicides. White people were far more likely to die of gun-related suicide in the state, while Black people and Native Americans were statistically overrepresented among homicide victims.

The Gun Violence Archive, an online database of real-time incidents, estimates the number of firearm deaths in 2020 surpassed 43,000.

In north Phoenix, Veerachart Murphy, owner of Ammo AZ, said sales of firearms and ammunition at his shop doubled from 2019 to 2020 – to $13 million – and at least some of that was driven by first-time buyers.

“It first started with COVID,” Murphy said, attributing the surge to the same hoarding mentality that prompted runs on hand sanitizer and toilet paper. “We saw it hit probably mid-February, when everybody started coming in here and just going crazy.”

He also pointed to worries related to the 2020 presidential election.

“There’s a change in administration, so a lot of people are scared that the AR-15 and AK-47 are going to get banned,” he said.

“We’ve seen a trend of more African Americans choosing to express their Second Amendment rights to own a firearm, especially for personal protection,” Philip Smith, president and founder of the National African American Gun Association, said in a news release.

As the FBI background check statistics show, firearms sales often increase during times of crises – mass shootings, for example. In December 2012, the month of the shooting at Sandy Hook Elementary in Connecticut, 16 states had record sales months, and in December 2015, the month of the San Bernardino shooting, six states set sales records, according to an analysis by home security company SafeHome.org.

Twenty-five states had record sales months in 2020 – 16 of them in March when lockdowns began, according to SafeHome.org. Arizona had a record 665,458 firearm background checks in 2020, according to the FBI.

“People feared that new gun laws would be introduced and restrict or limit the amount of guns or ammunition an individual could purchase,” Philippin said. “That same kind of fear and paranoia resurfaced in 2020.”

“We will take action to end our epidemic of gun violence and make our schools and communities safer,” Biden said in a statement last month on the third anniversary of the mass shooting at Marjory Stoneman Douglas High School in Parkland, Florida.

“It’s sort of a two-part issue, half of which is due to the pandemic,” he said. “Then there are the people buying guns and ammo because they think the new administration will take away that freedom.”

In a post last month on the Facebook group Cave Creekers Infamous Bulletin Board, a woman noted that a local Cabela’s store was so out of stock on ammunition that her husband asked what was happening. “The reply he got was, ‘The civil war.’”

As firearm sales increased, so, too, did some categories of violent crime. Homicides in Phoenix increased 52% from 2019 to 2020, according to police, driven by a 175% increase in homicides related to domestic violence.

In 70% of Phoenix homicides last year, police said, the killer used a firearm.

PrevPreviousBiden insists border’s closed, unveils plan to halt migrants at source
NextParler’s Statement on Reports of Being Blocked From Returning to the App StoreNext