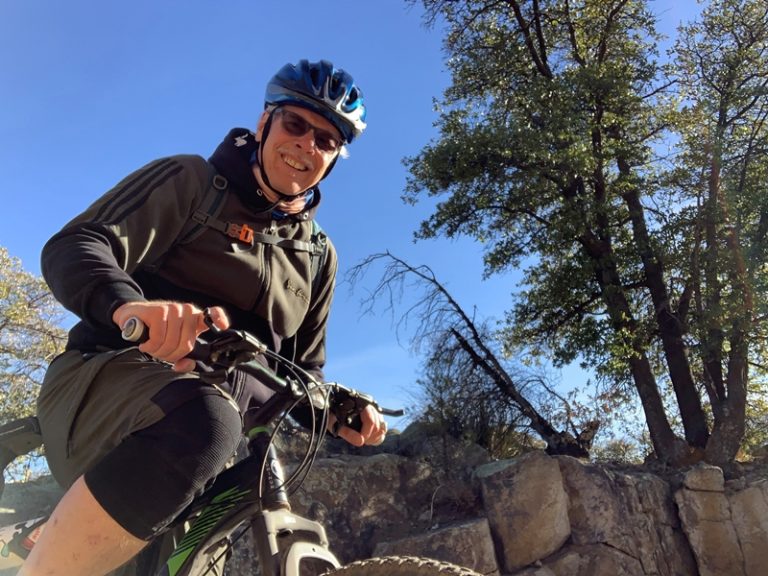 One morning last May, Yavapai College professor Daniel Swartz tossed a leg across his bicycle and set out along the Peavine Trail. His ride was initially about stress relief, to get his mind off the plight of his students. But he kept riding – the next morning, and the next – and an idea began to take shape.

On Sunday, March 14, Daniel’s Ride – now a heartfelt YC Foundation fundraiser – will log its 300th consecutive ride to benefit students suffering during the pandemic. Daniel will commence his ride at the Peavine’s South Trailhead off Sundog Ranch Road, at 2 p.m.

“I simply wanted to help,” Daniel Swartz, a 65-year-old American Sign Language Professor and interpreter, said his ride began with the simplest of motivations. Since then, his daily, 8½-mile trek between the Peavine Trailhead and the Granite Dells has captured the attention of student groups as well as local and Valley media and thus far raised more than $1,500 for the Yavapai College’s Student Emergency fund.

The daily ride has become an odyssey of sorts for Swartz, who has persevered through a shoulder injury, the January snowstorms, and his own battle with COVID-19, contracted last summer. He continued in solidarity with his students, many of whom were financing college on a shoestring. “One of the most vulnerable groups in society is higher education students.” The pandemic has been brutal to college enrollment, which declined 2.5% this fall – a loss of 400,000 students nationwide. Community colleges have been hit especially hard, with enrollment dropping more than ten percent.

Money raised by Daniel’s Ride will go to IAMYC’s Student Emergency Fund. A five-year-old, student-run organization, IAMYC performed a critical relief role last year. As a CARES Act distributor, it has approved 588 assistance applications – for over $299,000 – and fed more than 1,900 individuals between April and December 2020. IAMYC’s Emergency Fund helps Yavapai College students cover unexpected expenses that would otherwise take them out of school; allowing their education and future career plans to remain on-track.

Donors can support Daniel’s daily ride in a variety of ways: they can donate a dollar amount by pledging on Daniel’s YC Foundation page; they can join Daniel on the trail as fellow rider/fundraisers; or they can organize an event of their own.

The Yavapai College Foundation has set up a donation page on its Just Giving platform – www.justgiving.com/campaign/IAMYCFundraiser. Donors can contribute directly to the campaign, pledge money through Daniel’s own fundraising page, or set up a parallel ride or activity that generates funds for IAMYC. For more information, please contact the Yavapai College Foundation at: (928) 776-2025.