WWII veteran flies in a rare aircraft for his 94th birthday, thanks to nonprofit 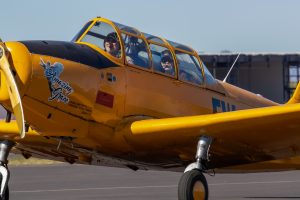 The two-seat aircraft – sunshine gold and christened Amazing Grace – taxied along a line of its honored passenger’s family members, friends and Patriot Guard Riders before roaring off from Falcon Field Airport.

The plane’s special passenger was World War II Navy veteran Norman Langeliers – who had turned 94 three days before his flight on Feb. 21. The special occasion was courtesy of the Christian nonprofit organization Grounded No More Inc.

CEO Tony Anger said he founded the nonprofit in January 2017 to give back to those who served our country. His team of volunteers, who spend their weekends honoring veterans, joined Langeliers for the nonprofit’s 430th veteran flight in the rare plane, a Fairchild PT-26 trainer. 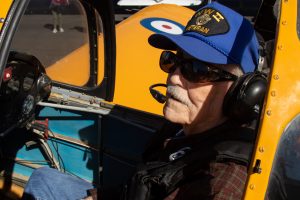 “I’m just overwhelmed, appreciative,” Langeliers said before he and Anger lifted off.

Langeliers, who joined the Navy at 17, served on the USS Indianapolis, which transported components of the first atomic bomb used against Japan during WWII. Until recently, he said, he had to get his blood drawn every year to make sure he was healthy.

Before every flight, Anger leads a prayer for the veteran of the day. He thanks them for their service, recites the Pledge of Allegiance and provides a quick history lesson about what flight-school candidates would learn on their first day. Then he and the veteran climb aboard the Fairchild PT-26, which was built in late 1943, and head to the skies.

Grounded No More flies U.S. veterans of all eras, as well as some from Canada.

Anger originally bought Amazing Grace in remembrance of his father, who performed in airshows when Anger was young. He flew the plane once with his daughter before he took the first veteran for a ride. He said he chooses veterans to fly mostly by chance, when people reach out to him or by word of mouth.

Some of the veterans Anger has flown have described being on the verge of suicide, but, he said, “This ride actually changed their lives.”

Anger believes that the adrenaline produced by certain aerial maneuvers, such as pulling Gs, “supersedes some of the other stuff that kind of sucked in their lives.”

The flights cost about $70,000 a year, including regular aircraft maintenance. Grounded No More is a 501(c)3 nonprofit entirely funded by donations.

When he prays before each flight, Anger quotes Abraham Lincoln: “Honor to the soldier and sailor everywhere, who bravely bears his country’s cause. Honor, also, to the citizen who cares for his brother in the field and serves, as he best can, the same cause.”

PrevPreviousSuperintendent of Education to Speak In Prescott
NextAs survivors pass on, more Holocaust education could be headed to Arizona classroomsNext