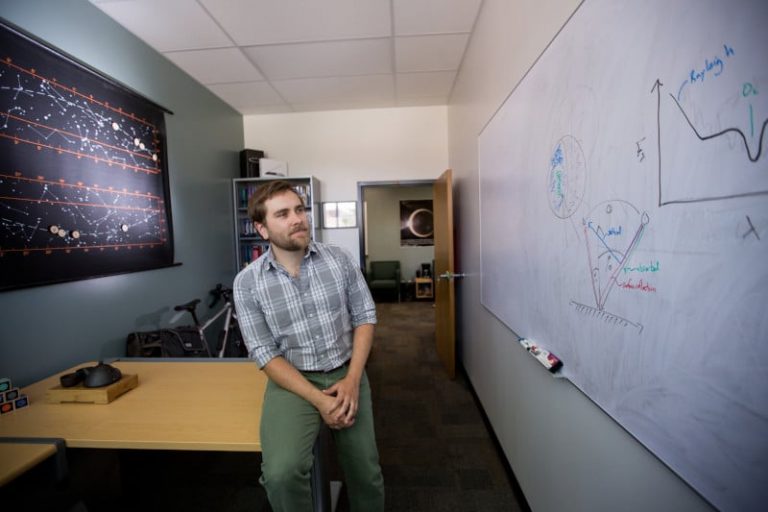 A Northern Arizona University astronomer who studies the atmospheres of solar system worlds, exoplanets and brown dwarfs has been recognized for his academic leadership and the quality and innovation of his research. The Research Corporation for Science Advancement (RCSA) recently named Tyler Robinson, assistant professor in NAU’s Department of Astronomy and Planetary Science, a 2021 Cottrell Scholar. This award includes a three-year, $100,000 grant to advance his teaching and research.

One of only 25 early-career teacher-scholars selected nationally from the fields of chemistry, physics and astronomy—and only the second NAU faculty member to receive the award—Robinson was chosen for his proposal, which focuses on approaches to understanding exoplanet atmospheres as well as on the development of a research mentorship program at NAU.

The grant will help Robinson explore the impacts of having prior knowledge of a planet’s mass when characterizing its atmosphere, study the role of interdisciplinarity in undergraduate education and build a diversity-focused undergraduate research mentorship program in his department.

In his newly funded work, Robinson will use state-of-the-art tools for characterizing exoplanet atmospheres from space-based telescope observations of these worlds. By running simulations of scenarios that both do and do not assume precursor knowledge of the mass of a given world, Robinson will be able to properly understand the role of so-called “mass priors.”

“This grant will also enable me to study the role that interdisciplinarity plays in an undergraduate astrobiology course at NAU, while building an astronomy research mentorship program designed to empower underrepresented groups in STEM,” Robinson said.

RCSA funds scientific research and the development of academic scientists. To be eligible for the award, an applicant must be an assistant professor. Robinson joined NAU faculty in 2017.

In working with a number of NASA teams, including the Habitable Exoplanet Observatory (HabEx) Science and Technology Definition Team, Robinson is engaged in designing future telescopes that would study exoplanets and their potential to harbor life. He is also interested in using spacecraft data to both better understand the thick atmosphere of Venus and to place Earth in the context of other rocky planets in our galaxy.

As their careers advance, Cottrell Scholars become eligible to compete for several additional levels of funding to further their academic careers. They meet each July at the annual Cottrell Scholar Conference to network, exchange ideas and develop collaborative projects to tackle pressing educational issues with potential national impact.

NAU physicist John Gibbs was named a Cottrell Scholar in 2018.