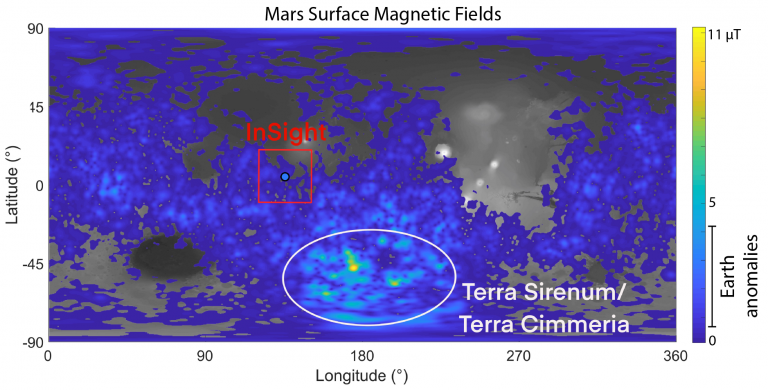 The planet Mars has no global magnetic field, although scientists believe it had one at some point in the past. Previous studies suggest that when Mars’ global magnetic field was present, it was approximately the same strength as Earth’s current field. Surprisingly, instruments from past Mars missions, both orbiters and landers, have spotted patches on the planet’s surface that are strongly magnetized—a property that could not have been produced by a magnetic field similar to Earth’s, assuming the rocks on both planets are similar.

Ahmed AlHantoobi, an intern working with Northern Arizona University planetary scientists, assistant professor Christopher Edwards and postdoctoral scholar Jennifer Buz in NAU’s Department of Astronomy and Planetary Science, led a study looking for answers to explain these magnetic anomalies. The team explored the relationships between the strength of the magnetic field on the surface and the composition of the crust in the Terra Sirenum-Terra Cimmeria region of Mars.

“Our findings show that in the area with the strongest magnetic patches, there is a verifiable positive correlation between the magnetic field and mineralogical data,” AlHantoobi said. “This leads us to believe that the composition of those patches enables them to record the magnetic field exceptionally well. Therefore, Mars’ ancient global magnetic field did not need to be as large to produce the strongly magnetized crust we observe today.”

The team recently published their findings in the journal Geophysical Research Letters in a paper entitled, “Compositional Enhancement of Crustal Magnetization on Mars.”

AlHantoobi, a student at Khalifa University in the United Arab Emirates (UAE), spent the last two summers participating in a program offered at NAU by Edwards and Buz to train and mentor Emirati undergraduate students in planetary science research. The program is part of Edwards’ involvement in the UAE space agency’s Emirates Mars Mission Hope orbiter project, which carries a unique new instrument he co-designed in collaboration with engineers from the United Arab Emirates Mohammed bin Rashid Space Centre (MBRSC) and Arizona State University (ASU). While AlHantoobi was able to be on campus during the summer of 2019, in order to continue his project during the summer of 2020 and abide by travel restrictions, the team adapted to the 11-hour time difference between Dubai and Flagstaff.

“The impact of this study is quite high, as it provides some of the first answers to details related to the magnetism of the Martian crust,” Edwards said.

“My research with Jennifer and Christopher was an eye-opening experience, and I believe it has impacted what I want to be in the future,” AlHantoobi said. “I got to experience first-hand the beauty of discovering and answering the unknown.”

Other collaborators on the study included scientists from ASU and the Université de Nantes in France.

PrevPreviousSupport for Biden’s $1.9 trillion coronavirus relief package may not be as broad as it seems – it’s all a matter of perspective
NextOpinion: A $15 Minimum Wage Hurts Vulnerable Workers the MostNext