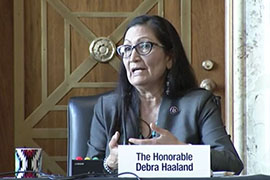 A Senate committee narrowly voted Thursday to advance Rep. Debra Haaland’s nomination to be the next secretary of Interior, moving her one step closer to becoming the first Native American to head a Cabinet-level agency.

The Senate Energy and Natural Resources Committee voted 11-9 to send Haaland’s nomination to the full Senate, over the objections of Republicans who said her “radical views” are “squarely at odds with the mission of the Department of the Interior and outside of the mainstream.”

But Democrats praised the New Mexico Democrat’s policy positions and cited her record of bipartisanship as a member of the House. Analysts expect she will pick up a couple Republican votes in the full Senate, giving her more than the 51 needed to win confirmation.

News of the preliminary approval was welcomed by tribal groups.

“We need Congresswoman Haaland on the job without delay,” said Fawn Sharp, president of the National Congress of American Indians, in a prepared statement.

“The nation needs her leadership and vision to help lead our response to climate change, to steward our lands and ensure … the United States lives up to its trust and treaty obligations to tribal nations and our citizens,” said Sharp, who called it “fitting that while we celebrate Women’s History Month, Deb Haaland is poised to make it.”

If confirmed, Haaland would take over an agency with about 70,000 employees and a budget of more than $21 billion. In addition to overseeing hundreds of national parks and monuments, the department manages 480 million acres – nearly one-fifth of the total land area of the U.S. – and 700 million acres of minerals, including coal, oil and natural gas, as well as renewable energy sources.

The department also includes the Bureau of Indian Affairs and holds most tribal lands in trust, a fact that makes President Joe Biden’s nomination of Haaland particularly important to her supporters.

If Haaland, a member of the Pueblo of Laguna, is confirmed it will be a “crucial turning point in the history of the federal government’s relationship with Indigenous people” said Jenny Rowland-Shea, senior policy analyst of public lands at the Center for American Progress.

Haaland’s ancestry was cited Thursday by Sen. Lisa Murkowski of Alaska, the only committee Republican to vote in favor of the nomination. She also noted that Interior plays an “outsized role” in her state.

“We have federal lands, more mineral resources, more natural hazards than any other state,” Murkowski said. “We’ve got many, many Indigenous peoples and cultures who have lived there since, as they say, time immemorial.”

Sen. Joe Manchin, D-W.Va., said he was attracted by Haaland’s bipartisan record in the House, a quality needed more than ever after the Capitol riot of Jan. 6, a day that “changed me, as I know changed most of you.”

“I feel so incredibly strongly that in today’s time with the deepest divisions running through our country, and the halls of Congress, we have to have people who have demonstrated they have the temperament to reach across the aisle,” said Manchin, the chair of the committee.

But most Republican members, particularly those from oil and gas states, were concerned about Haaland’s history supporting initiatives like the Green New Deal. Sen. John Barrasso, R-Wyo., worried that the Biden administration’s climate agenda is like “taking a sledgehammer to Wyoming and other Western states’ economies.”

Republicans posed the sharpest questions during her confirmation hearing last week, and accounted for most of the 126-page list of follow-up questions and answers.

Kelly voted Thursday to confirm Haaland. Rowland-Shea said she expects Arizona’s other senator, Democrat Kyrsten Sinema, to also back the nomination, but Sinema’s office would only say Thursday that she “spoke with Rep. Haaland and is carefully considering her nomination.”

The next step in the confirmation process is a full senate vote in which Haaland only needs a simple majority of 51 votes. Even in an evenly divided Senate, Rowland-Shea said she does not expect Vice President Kamala Harris will be needed to break a tie.

“There’s not likely to be major barriers with the full Senate vote, along with Sen. Murkowski, (Maine Republican) Sen. Susan Collins has also made clear she will vote in support as well,” said Rowland-Shea, who expects all 50 Democrats to back the nomination.

Committee staff did not respond to requests on when Manchin might bring the nomination up for a full Senate vote.

PrevPreviousArizona Today: Interview with Rabbi Jack Zimmerman
NextSupport for Biden’s $1.9 trillion coronavirus relief package may not be as broad as it seems – it’s all a matter of perspectiveNext