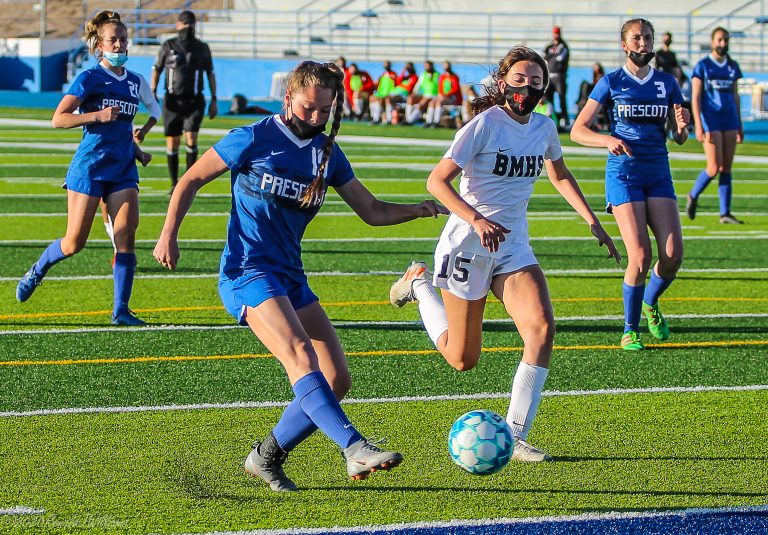 The Prescott Badgers girls soccer team completed another perfect regular season with 10-0 win over the Bradshaw Mountain Bears. Led by Kari Kasun, who tied her season record of  5 goals, the Badgers totally dominated the game that ended with still 20 minutes left due to AIA rules.

The Badgers have now won 25 straight region games, and are back to back Grand Canyon Region champions.

Kari Kasun said, “I just try to do whatever I can do to help our team win. We prepared for tonight like any other game, even though this was senior night. Our team is playing very good right now and everyone is doing their job, and it showed again tonight.”  As for the playoffs, Kasun said, “ We have learned something from each of my past two seasons, and hope to use that in this year’s playoffs.”

Nicole Raiss set an individual record with 4 goals and has scored a goal in every game this season. Kasun scored first, just three minutes into the game. Raiss scored with 26:38 left in the first half to make it 2-0. Kasun scored again, with the assist going to Ellie Magnett at the 16:15 mark, for a 3-0 lead. Senior, Indy Dimaano-Simmons scored at 10:55 on the clock for a 4-0 lead. Raiss scored again with help from Ellie Magnett, and it was 5-0. Kasun scored the Badgers sixth goal with 3:45 left in the half, and Raiss closed out the scoring for a 7-0 Prescott lead.

The second half was no different as the Badgers scored three more goals before the game was finally called. Kasun scored goal numbers 8 and 9, and Raiss closed out the night with 10th goal, with 31:06 on the clock.

Coach Paul Campuzano said, “I am so proud of the girls. We graduated ten seniors and seven starters from last year and with COVID, we didn’t really know what to expect, but to their credit, they worked hard and have come together as a team.”

In regards to the playoffs, Campuzano added, “We added some wrinkles to our formations, so we know what we can do and play comfortably, but I want them to be uncomfortable and force them to rethink and solve the problem of the other teams defense. I know that they are completely engaged in the game and as long they keep asking for it and wanting it, we should be in good shape.”

Prescott (11-0) will stay at the top spot in Division 4. The Badgers, who have outscored their opponents 68-5, will start the playoffs next Wednesday night against an opponent to be determined Saturday, when the playoff pairings will be posted. The game will be at Prescott High School starting at 6:00 pm.

PrevPreviousExecutive Order 2021-05 Regarding Occupancy Limits; All Other Restrictions Remain In Place
NextSummer school an expanding option for students who struggled with online learningNext