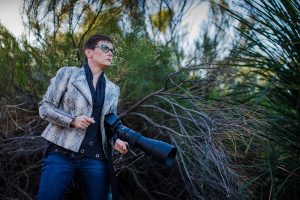 After leaving the Army two decades ago, Miachelle DePiano faced new challenges on the civilian battlefield: a hyper-competitive job market.

“I couldn’t show anybody a portfolio because everything I had written was classified, and I didn’t have a degree to back up my claim,” said DePiano, who served as an intelligence officer in Germany and Croatia.

Other Arizona veterans and advocates said DePiano’s job-hunting experience is all too common, with veterans unsure of themselves and too often overlooked by potential employers. But the job-hunt can be more complex, and help is available on several levels.

And, according to data and interviews, women and minority veterans often have a tougher time getting a job.

“It’s kind of scary to talk to a company sometimes if you haven’t been in the market a long time,” said Reckner, a career counselor for veterans. “You’ve got to have that kind of cold call mentality of, ‘I’m going to break the ice and talk to this person and figure out if I am a fit. ’”

Employers and veterans often have trouble figuring out how military expertise can transfer to the workplace, Reckner said.

“If you’re a jet engine mechanic in the Navy and you’re looking for a job outside of the service, it’s tough to understand where your skills might fit in,” Reckner said, noting that these mechanics also can work on airplane pneumatics, hydraulics and propulsion systems.

Sometimes the type of work in the military matters. Former service members who were of higher ranks or had certain skill levels had a better chance of getting a job, according to a 2020 Census Bureau report.

“Former U.S. Army soldiers who were drone operators, military intelligence, cyberspace or telecommunications specialists generally have the highest earnings in the civilian market after leaving service,” the report said.

Younger veterans and those with a lower military rank and less training, however, are at a disadvantage.

“Poorer employment outcomes for combat occupations may reflect a greater mismatch between their military training and the skills and certifications sought by civilian employers,” the report says.

“It kind of gets ingrained into you, when you’re in the service, the basics of staying until the mission’s done and continuing to work until you see a result,” Reckner said. “It’s just understanding how to get good at that.”

Brian Ritter was an Army recruiter and fire support specialist assisting combat units under siege before he landed a job with the Census Bureau. He attributes his success to his two tours in the military.

“It definitely helped me because I’m 40 years old now, and I was in charge of 50- to 60-year-olds that should know what they’re doing,” Ritter said. “The leadership and management skills I got from the military helped me out.”

Denise Pulk worked in the banking industry before entering the Navy and serving four years as a disbursing clerk from 1992 to 1996. During her years of service, she helped sailors deal with their pay benefits while handling foreign currencies when visiting other countries.

She now works with the Scottsdale Charros, a foundation that supports youth through educational programming and financial support.

“I always, in my mind, just kind of knew that being a veteran and being in the military actually made me more employable,” she said.

Veterans also can have a higher income than nonveterans.

A 2019 Pew Research Center report shows the median household income for veterans families in 2017 was nearly $89,000 annually, or $12,000 higher than non-veteran households. The gap has remained mostly steady for four decades.

“I saw the discrepancy in differences between what white general officers and what African American general officers were getting (treatment after service),” said 34-year retired Army Maj. Gen. Dana Pittard, one of the few African Americans in the military to reach two-star general rank. “In fact, during my transitional period for the military, my job was to find a job.”

He retired after a controversy over an allegation of contract favoritism that he says was false and related to racism – he has since spoken about institutional racism in the military and experiences he faced as he rose through the ranks. Unlike some African American veterans, he says he received lucrative job offers once he left the military because of his success in the military and because he was transparent about the contract controversy.

Pittard, co-author of the book “Hunting the Caliphate,” also remembers the experiences of his father, who retired as a lieutenant colonel.

“As an African American officer retiring in the early 1970s, there were not a whole lot of job offers for my father,” Pittard recalled. “Big companies simply were not beating down his door to hire him like his fellow white retired officers.”

The situation is worse for female veterans, who typically have higher unemployment than male veterans.

Kathy Gallowitz, previously a part-time member of the National Guard and chief executive of advocacy organization Vanguard Veterans, said she had trouble getting employers to recognize her as a long-term asset.

DePiano said she faced a certain attitude in her initial job search in 2004.

“I couldn’t get a job as a veteran, no one cares that I was a veteran out here, it didn’t matter,” she said. “I was struggling with having to re-create myself and who I was to be going forward.”

Military organizations and systems can ease the way for veterans to get jobs. Ritter said the Army starts prepping service members months before they leave.

Before discharge, he said, “you have to go through psych classes to transfer over from military life to civilian life. I took about three months of classes at Luke Air Force Base towards transitioning that helps you with resumes, interviews and benefits.”

Such organizations as the Department of Veterans Affairs offer some job training help. Reckner works with the Disabled American Veterans Charity and RecruitMilitary to help veterans through virtual hiring events as they look for jobs, whether that’s organizing the right paperwork to knowing how to behave during job interviews.

The American Legion Department of Arizona and other groups seek to provide financial support to veterans and their families.

“We can give you temporary financial assistance with the idea that this is not a handout” – it’s a step to financial freedom, legion spokesperson Bradley Heck said.