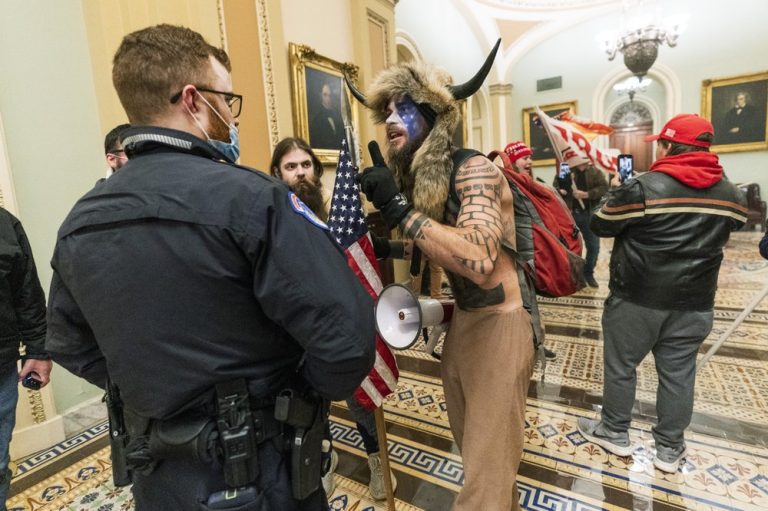 Prosecutors in Washington are opposing the pretrial release of an Arizona man who stormed the U.S. Capitol nearly two months ago while sporting face paint, no shirt and a furry hat with horns.

Prosecutors told a judge in a filing Monday that Jacob Chansley should remain jailed until trial because he is a danger to the community, explaining he held a weapon as he confronted officers inside the Capitol, wrote a threatening note to then-Vice President Mike Pence, and spoke about ridding the government of traitors.

A judge in Washington is scheduled to hear arguments Friday over whether Chansley should be released.

While prosecutors say the spear attached to a flagpole carried by Chansley into the Capitol was a weapon, his attorney has characterized the spear as an ornament.

The defense lawyer also argued the message that Chansley penned to Pence wasn’t intended to be threatening and said his client is suffering from digestive tract difficulties, even though he has been given him organic food, as he had requested.

Authorities say Chansley was among the first people to force their way into the Capitol building, disobeyed orders to leave, refused an officer’s request to use Chansley’s bullhorn to tell rioters to leave the Senate chamber, called Pence a traitor and wrote a note to the then-vice president saying, “It’s only a matter of time, justice is coming.”

Chansley, who calls himself the “QAnon Shaman” and has long been a fixture at Trump rallies, unsuccessfully sought a pardon from Trump. He has since apologized for his actions during the insurrection and has soured on Trump. He has pleaded not guilty to two felony and four misdemeanor charges.

Prosecutors said other people arrested in the Capitol riot have remained jailed for possessing nontraditional weapons, such as an axe handle or flagpole.