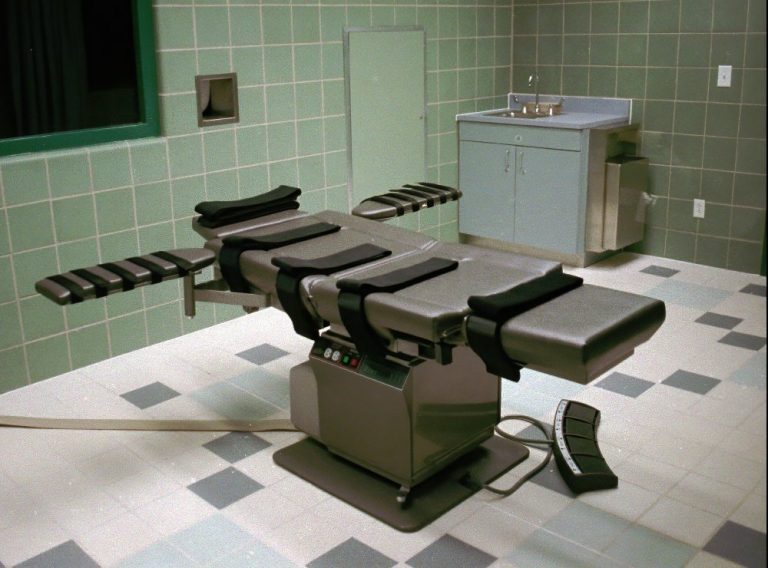 Executioners who put 13 inmates to death in the last months of the Trump administration likened the process of dying by lethal injection to falling asleep and called gurneys “beds” and final breaths “snores.”

But those tranquil accounts are at odds with reports by The Associated Press and other media witnesses of how prisoners’ stomachs rolled, shook and shuddered as the pentobarbital took effect inside the U.S. penitentiary death chamber in Terre Haute, Indiana. The AP witnessed every execution.

The sworn accounts by executioners, which government filings cited as evidence the lethal injections were going smoothly, raise questions about whether officials misled courts to ensure the executions scheduled from July to mid-January were done before death penalty opponent Joe Biden became president.

Secrecy surrounded all aspects of the executions. Courts relied on those carrying them out to volunteer information about glitches. None of the executioners mentioned any.

Questions about whether inmates’ midsections trembled as media witnesses described were a focus of litigation throughout the run of executions. Inmates’ lawyers argued it proved pentobarbital caused flash pulmonary edema, in which fluid rushes through quickly disintegrating membranes into lungs and airways, causing pain akin to being suffocated or drowned. The U.S. Constitution prohibits execution methods that are “cruel and unusual.”

The discrepancies could increase pressure on Biden to declare his administration won’t execute any of the roughly 50 federal inmates still on death row. Activists want him to go further by backing a bill abolishing the federal death penalty. Biden hasn’t spoken about any specific action.

During the Sept. 22 execution of William LeCroy, convicted of killing Georgia nurse Joann Lee Tiesler in 2001, the 50-year-old’s stomach area heaved uncontrollably immediately after the pentobarbital injection. It lasted about a minute, according to the AP and other reports.

Executioner Eric Williams stood next to LeCroy as he died. But Williams made only cursory reference to “the rise and fall” of LeCroy’s abdomen in his account. Shortly after serving in five of the recent executions, Williams was named the interim warden of the high-profile New York City lockup where Jeffrey Epstein died in 2019.

“During the entirety of the execution, LeCroy did not appear to be in any sort of distress, discomfort, or pain,” Williams wrote. “A short time after he took a deep breath and snored, it appeared to me that LeCroy was in a deep, comfortable sleep.”

The distinctive jerking and jolting was visible in at least half the executions, according to the AP and other media accounts. Among multiple executioner accounts, none described any such movements. All employed the same sleep metaphors.

When Donald Trump’s Justice Department announced in 2019 it’d resume executions after a 17-year hiatus, it said it would use pentobarbital alone. Manufacturers were no longer willing to supply the combination of drugs used in three federal executions from 2001 to 2003, explaining they didn’t want drugs meant to save lives to be used for killing.

One point of contention during the litigation was whether, even if pulmonary edema did occur, inmates could feel it after they appeared to be knocked out. Experts for the prisoners said the drug paralyzes the body, masking the pain prisoners could feel as they died.

None of those executed appeared to writhe in pain. But audio from the death chamber to the media viewing room was switched off just prior to the injections, so journalists couldn’t hear if inmates groaned or complained of pain.

William Breeden, a spiritual adviser in the chamber when 52-year-old Corey Johnson was executed on Jan. 14 after his 1992 conviction of killing seven people, said in a filing the next day that “Corey said his hands and mouth were burning” after the injection. Federal Bureau of Prisons attorney Rick Winter said in response that neither he nor anyone in a government witness room heard that.

Some pain doesn’t necessarily mean an execution method violates prohibitions against “cruel and unusual” punishment, the Supreme Court ruled in 2019. The Constitution, the 5-4 majority opinion said, “does not guarantee a prisoner a painless death — something that, of course, isn’t guaranteed to many people.”

Government lawyers, eager to carry on and avoid any potential delays, sought to discredit the journalists’ accounts.

In an Oct. 8 filing, government expert Kendall Von Crowns, who didn’t witness the executions, relied on executioners’ descriptions to suggest journalists misperceived what they saw. He noted that LeCroy’s executioner “does not state that there was any irregular or uncontrolled heaving.” It was more likely, he said, that journalists saw “hyperventilation due to the anxiety associated with his impending death.”

The Federal Bureau of Prisons declined to comment on why lawyers representing the agency relied on experts who had not observed executions in person and whether executioners’ statements may have misled courts.

In an evidentiary hearing in U.S. District Court in Washington, D.C., on Sept. 18 — when eight executions had yet to be carried out — government attorneys objected when inmates’ lawyers asked Crowns about media reports of midsection movements in three of the first five executions.

After Judge Tanya Chutkan overruled them, Crowns suggested what reporters saw was called agonal breathing — involuntary intakes of air in the final moments before death.

“It has nothing to do with they’re drowning in their own fluids or they can’t breathe,” Crowns testified. He added: “It has no relevance to pulmonary edema whatsoever.”

All the journalist reports said the movements happened within minutes of injections, never in the minutes before an inmate was pronounced dead.

What media witnesses described was consistent with pulmonary edema, an expert for inmates’ legal teams, Gail Van Norman, argued in a filing after LeCroy’s execution. She said that as fluid blocks airways, it throws the chest, diaphragm and abdomen off their usual rhythm, “giving the appearance of the chest and abdomen rocking opposite of one another, or a heaving abdomen.”

Authorities also provided no public access to medical records on when inmates’ brainwaves or hearts stopped, which could have helped determine whether they were conscious when the distinctive motions occurred.

Chutkan was asked to revisit and rule on the issue repeatedly. At one hearing, she expressed exasperation with the pace of the executions, saying the unrelenting push by government attorneys accorded her little time to digest a deluge of filings on often complex scientific issues.

“I am drinking from a firehose here,” she said.

But in a key Sept. 20 decision, Chutkan cited the conflicting witness accounts, dueling experts and the Supreme Court’s 2019 ruling in ruling against the inmates — several of whom were scheduled to die, and would die, within days.

“While the court continues to be concerned at the possibility that inmates will suffer excruciating pain during their executions,” she said, inmates’ attorneys “have not established that flash pulmonary edema is ‘certain’ or even ‘likely’ to occur before an inmate is rendered insensate.”