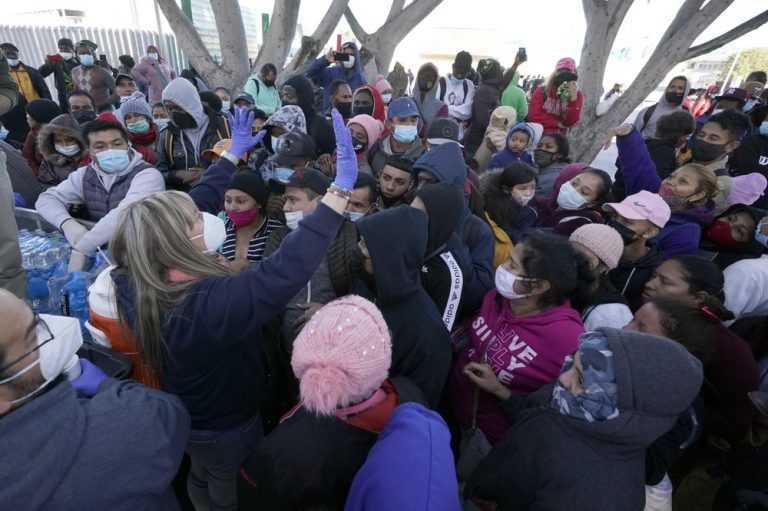 The Biden administration moved to restore the asylum system to the way it worked for decades Friday by releasing a group of asylum-seekers into the United States, ending their long wait in Mexico and unraveling one of former President Donald Trump’s signature immigration policies.

The 25 people who arrived are the first of an estimated 25,000 asylum-seekers with active cases in the “Remain in Mexico” program who will now wait in the U.S. for their court hearings instead of south of the border. Wary of a surge of migrants, American officials are warning people not to come to the border and to register on a website that the U.N. High Commissioner for Refugees launched Friday.

The new arrivals were taken to San Diego hotels to quarantine amid the coronavirus pandemic before they travel to their final destinations in the U.S. to stay with relatives, friends or sponsors.

President Joe Biden is making good on his promise to end a policy that Trump said was critical to reversing a surge of asylum-seekers, which peaked in 2019. The program, known officially as “Migrant Protection Protocols,” changed the way people traditionally had been treated by the U.S. government as they sought protection from violence and persecution. It exposed them to violence in Mexican border cities and made it difficult to find lawyers and communicate with courts about their cases.

There were unanswered questions about Biden’s changes, including how Central Americans who returned home will get back to the U.S.-Mexico border. It’s also unclear how long it will take to work through all the cases, with the oldest going first.

There was also some confusion at the border. About 100 people gathered Friday at the crossing in Tijuana, Mexico, sharing rumors and hoping to glean information about when they would be allowed into the United States while their cases are decided by the courts.

The U.S. is expected to release 25 people a day in San Diego who had been forced to wait in Mexico, said Michael Hopkins, chief executive officer of Jewish Family Service of San Diego, which is playing a critical support role. Authorities can process up to 300 a day at the San Diego border crossing, but Hopkins said it’s not known when they will change the target of 25 a day.

People also were expected to be let into the country starting Monday in Brownsville, Texas, and next Friday in El Paso, Texas.

The International Organization for Migration, the U.N. migration agency, tests asylum-seekers for COVID-19 in Mexico and quarantines anyone with positive results for 10 days. In San Diego, even asylum-seekers who tested negative will quarantine for seven days in hotels under U.S. Centers for Disease Control and Prevention guidelines.

“We’ll make sure they are healthy and in good shape to travel,” Hopkins said in an interview.

About 70,000 asylum-seekers have been part of the Remain in Mexico program since it started in January 2019. Those whose cases were dismissed or denied are not eligible to return to the country, but U.S. officials have not ruled out some form of relief later.

The Biden administration, which stopped enrolling new arrivals on its first day, said last week that asylum-seekers with active cases would be released in the United States with notices to appear in immigration courts closest to their final destinations. It brought huge relief to those who are eligible, while U.S. and U.N. officials urged against a rush to the border.

Edwin Gomez, who said his wife and 14-year-old son were killed by gangs in El Salvador after he couldn’t pay extortion fees from his auto repair shop, was eager to join his 15-year-old daughter in Austin, Texas. She already won asylum and is living with family.

“Who thought this day would come?” Gomez, 36, said Wednesday in Tijuana, Mexico, at a border crossing with San Diego. “I never thought it would happen.”

Across the border from Texas’ Rio Grande Valley, Enda Marisol Rivera of El Salvador and her 10-year-old son have been braving below-freezing temperatures this week, snuggling under piles of donated blankets in their makeshift tent of tarps. Their propane gas stove froze, she said. Despite the added hardship from the Arctic blast that hit Texas and northern Mexico, Rivera was in good spirits.

Rivera and her son are among about 850 migrants living in the tent camp in a sprawling park just south of the Rio Grande in the Mexican city of Matamoros who applied for asylum and were told to wait in Mexico for their U.S. court dates. Many in the camp turned down offers this week to be transferred to city shelters, fearing they would lose their chance at being allowed into the United States if they didn’t stay close to the border.

Rivera was hopeful she would be allowed to come to the United States, where she could live with her sister in Los Angeles as her case wound through immigration court.

“We have faith in God that we will be allowed in,” she said Wednesday. “We have already spent enough time here.”