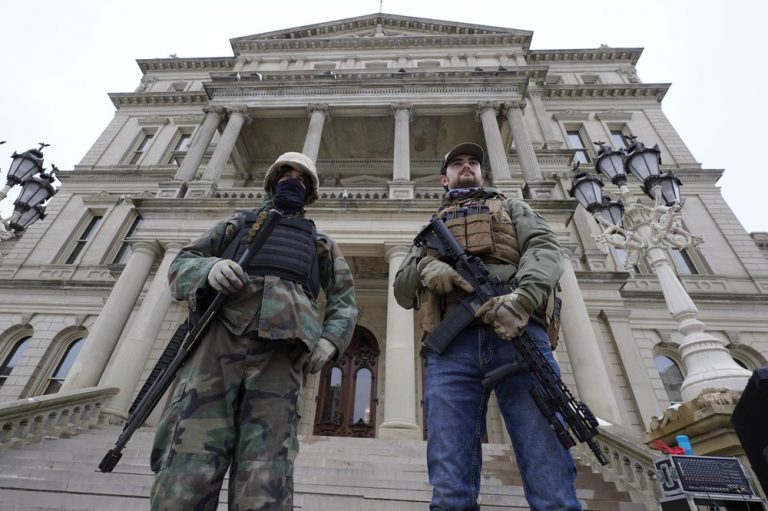 In the past year, insurrectionists have breached the U.S. Capitol and armed protesters have forced their way into statehouses around the country. But the question of whether guns should be allowed in capitol buildings remains political, and states are going in opposite directions.

In Montana, a law signed Thursday allows anyone with a permit to bring a concealed firearm into the Statehouse, reversing a decades-long ban and fulfilling a longtime hope of Republicans who took control of the governor’s mansion and the Legislature this year. GOP-dominated Utah passed a law this month allowing people to carry concealed weapons in its Capitol and elsewhere in the state without a permit.

Guns are allowed in statehouses in some form in 21 states, according to a review by The Associated Press. Eight states allow only concealed firearms inside their capitols, while two states allow only open carry.

Montana and Utah are two of at least 13 states that do not have metal detectors at the entrance to their capitols. The statehouses are open to the public even as many have closed because of the coronavirus pandemic.

Several other states, though, are moving to restrict guns inside their capitols. In Michigan, where armed protesters forced their way inside the Statehouse last year and the FBI said it uncovered a plot to kidnap the governor, a state panel banned the open carry of guns after the Jan. 6 riot in Washington, D.C.

Democratic state Sen. Dayna Polehanki said that “tensions are high” in Michigan following the assaults, and she’s disappointed that concealed weapons are still allowed in the Statehouse.

“What they said is that weapons, guns, bullets are still welcome in our state Capitol as long as we can’t see them. It doesn’t make anyone safer,” she said.

Vermont lawmakers, meanwhile, are considering expanding their Statehouse ban on guns to other government buildings. In Washington state, a measure that would ban open carry of guns in the Capitol and near permitted demonstrations has cleared a committee and is awaiting a vote by the full Senate.

“The purpose of openly carrying a weapon is to chill other people’s voices. And it works,” said its sponsor, Democratic state Sen. Patty Kuderer.

In nearby Oregon, crowds opposed to the Statehouse being closed to the public during a pandemic-related session stormed the building, including at least one person armed with an AR-15. And in Idaho, self-styled “patriots,” anti-vaccination groups and others forced their way past police at the Capitol in August, shattering a window as they pushed and shoved into a gallery.

In Montana, though, Republican Rep. Seth Berglee said the U.S. Capitol riot didn’t affect his thinking about the law he sponsored.

“People that have a permit are extremely law-abiding, and they are the type of people I would want to have around. I see them as being a deterrent to bad things happening,” he said.

There’s a similar proposal this year in Oklahoma, where gun rights advocates are again pushing to allow people with a license to carry firearms inside the Capitol. It hasn’t yet had a hearing.

“A person needs to be able to protect themselves, no matter where they are,” said Don Spencer, president of the Oklahoma Second Amendment Association.

Not everyone in Montana feels safer with the new law, however. Democratic House Minority Leader Kim Abbott said more guns could add a chilling new dimension to debates in polarized times.

“If you have more guns in the building when you’re talking about things that are so personal and intense … you do worry about things escalating,” she said.