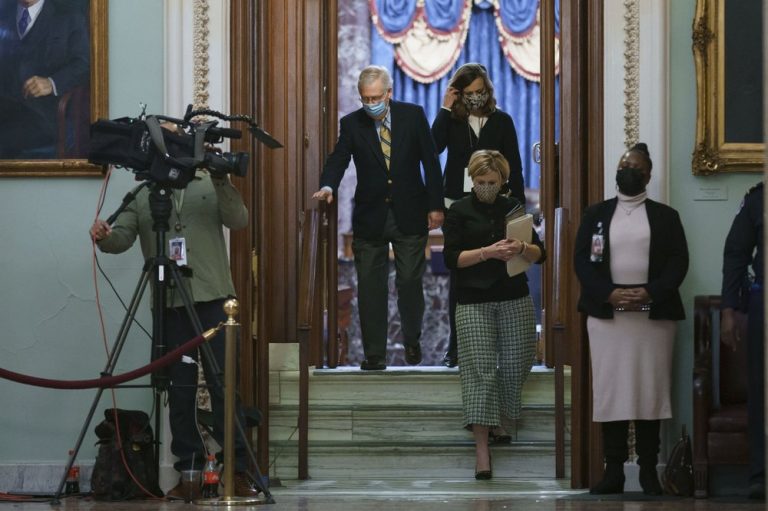 Former President Donald Trump is escalating a political war within his own party that could undermine the Republican push to fight President Joe Biden’s agenda and ultimately return to power.

A day after blistering Mitch McConnell, the Senate’s top Republican, as a “dour, sullen and unsmiling political hack,” Trump repeated his baseless claim on Wednesday that he was the rightful winner of the November election in a series of interviews with conservative outlets after nearly a month of self-imposed silence.

Trump also continued to attack McConnell, accusing the Senate GOP leader of failing to stand up for Republicans after McConnell blasted Trump for inciting the Jan. 6 Capitol riot despite voting to acquit the former president at his second impeachment trial.

“The Republicans are soft. They only hit their own, like Mitch,” Trump complained on Newsmax. “If they spent the same time hitting (Senate Democratic leader Chuck) Schumer and (President Joe) Biden, the Republicans would be much better off, that I can tell you.”

Republican officials in several battlegrounds carried by Biden, including Georgia and Arizona, have said the vote was fair. Trump’s legal claims surrounding the vote were rejected by judges across the political spectrum, including many appointed by the former president. McConnell himself described Trump’s contention as an “unhinged falsehood.”

Leading GOP strategists described the exploding feud between the former Republican president and the Senate’s most powerful Republican as, at best, a distraction and, at worst, a direct threat to the party’s path to the House and Senate majorities in next year’s midterms.

“I don’t think he cares about winning,” Steven Law, a McConnell ally who leads the most powerful Republican-aligned super PAC in Washington, said of Trump. “He just wants it to be about himself.”

Law noted that Trump lost several states where Republicans face must-win Senate elections in next year’s quest to break up Democrats’ control of Congress, including in Arizona, Georgia, Pennsylvania and Wisconsin. Republicans are also competing in Nevada and New Hampshire, where Trump was defeated, and in North Carolina, where Trump barely won.

If Trump tries to make himself “the center of attention,” Law said, “that actually could cost Republicans seats in the general election.”

Such infighting is not altogether unusual after a political party loses the White House, but in this case, the feuding factions have been willing to attack each other publicly. And there was a broad consensus on Wednesday that the ugly intraparty clash would likely extend well into next year’s congressional primary season.

The stakes may be higher this time, however, as key players — Trump, among them — have openly threatened the prospect of creating a new political party, which would endanger the Republican Party’s very existence.

Roughly 120 anti-Trump Republicans, including current and former officeholders, secretly convened earlier in the month to contemplate the future of the GOP. A plurality, or 40%, supported the idea of creating a new party, according to an internal survey provided by one of the meeting’s organizers, former independent presidential candidate Evan McMullin.

“There’s a lot of energy out there for something new,” McMullin said, while encouraging Trump to follow through with his threats of creating a Patriot Party. “Frankly, I would welcome him to start a new party and take his most loyal supporters with him. I think that would be a wonderful thing for the party and the country.”

Trump’s plans for the future are still coming together in West Palm Beach, Florida.

He has been banned from Facebook and Twitter for inciting violence, but on Wednesday, he broke his month-long silence, giving his first interviews since leaving the White House after the death of conservative commentator Rush Limbaugh.

On Newsmax, Trump said his team was still exploring its options for returning to social media and “negotiating with a number of people,” while still keeping the option of building his own platform on the table.

“We’re looking at a lot of different things, but I really wanted to be somewhat quiet,” Trump said, sidestepping repeated questions about whether he intends to run again in 2024.

“Too early to say,” he said, while acknowledging that he missed being president.

Still, Trump said that he has had no problem communicating when he wants to by issuing statements — and has made clear this week that he will not retire quietly.

The former president hurled a series of personal insults at McConnell in a fiery written statement Tuesday. Mainstream Republicans were perhaps most concerned about his threat to support primary challengers against Republican candidates who don’t fully embrace his “Make America Great Again” philosophy.

Some feared that Trump might encourage Rep. Marjorie Taylor Greene, R-Ga., to run for the Senate, though there was no evidence of that. The fears hark back to the GOP’s struggle a decade ago when a handful of tea party candidates with baggage emerged from their Senate primaries and stymied the GOP from retaking a majority.

In Indiana, Richard Mourdock defeated six-term Sen. Richard Lugar in the 2012 primary, but he imploded after a debate in which he said pregnancy resulting from rape “is something that God intended.” In Missouri, Republican nominee Todd Akin lost after he insisted on a local talk show that women’s bodies have ways to avoid pregnancy in cases of “legitimate rape.”

And in Delaware, tea party favorite Christine O’Donnell beat a longtime GOP congressman before losing by a landslide in the 2010 general election following reports of personal financial difficulties, questionable use of campaign funds and allegations that she had “dabbled into witchcraft.”

Now that Trump has invigorated a similarly populist movement, Republicans need to recruit candidates who can navigate a pro-Trump primary and maintain statewide appeal while not alienating establishment-minded donors. That’s no easy task.

The Senate Republican campaign arm, led by Florida Sen. Rick Scott, will not get involved in open primaries. But McConnell’s advisers have not ruled out the possibility — even if it draws Trump’s ire.

“You can’t let insanity go unchecked, or it will eat you alive,” said Josh Holmes, a top McConnell political adviser.

Meanwhile, Trump broke his month-long media blackout Wednesday, calling into Fox News, Newsmax and OANN and repeating what Democrats have labeled his “big lie”: his insistence that he won the 2020 election, even though he lost to Biden by millions of votes.

Dozens of judges, local election officials and even his own administration have said there was no evidence of mass voter fraud, but that hasn’t stopped Trump from saying there was, even after the Jan. 6 riot at the Capitol building that left five dead.

“Well, Rush thought we won. And so do I, by the way. I think we won substantially,” Trump told Fox.

He did not call out McConnell by name, but he acknowledged critics within his own party: “We don’t have the same support at certain levels of the Republican system.”

Meanwhile, Law sought to downplay Trump’s grip on the Republican Party. He noted that Trump’s approval rating among Republican voters, at close to 80%, stands at a similar mark to that of former President George W. Bush following the Iraq War and the 2007 financial meltdown.

The focus on the next election cannot be Trump, he said.

“We will do everything we can to make the focus Joe Biden and the Pelosi-Schumer Congress. We can win with that,” Law said. “The challenge is if there’s a way in which Trump finds a way to make himself the focus next fall.”