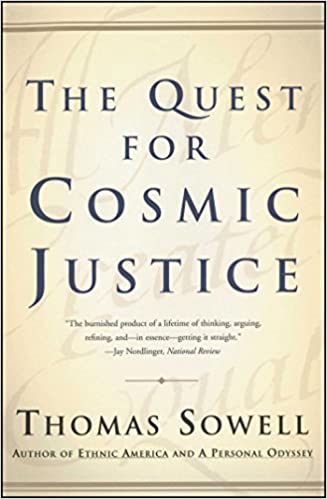 Many Americans today continue to talk past each other in their discussions of justice.

Progressives often see conservatives as insensitive and lacking compassion for the poor and oppressed. They march and protest in the streets for justice and view conservatives’ lack of protest as signs of their racism and privilege. Meanwhile, many conservatives cannot understand how progressives can see their tactics as just. They watch the protesters loot and burn cities and gape at the lawlessness of these social “justice” warriors.

The reason why there can be no actual conversation between these groups is that they do not share the same definition of justice. No one explains this better than Thomas Sowell in his book, The Quest for Cosmic Justice.

Sowell explains that there are two ruling concepts of justice in America: traditional justice and social or, as he calls it, cosmic justice. Cosmic justice is what someone would choose if they were creating the universe from scratch. For example, if I were to create my own cosmos, I probably would not choose to include racism or poverty. I could eradicate human suffering and pain. Maybe I would ensure total equality of opportunity and outcome. Each of these things has to do with end results; they have nothing to do with the means which would have to bring about these results.

Traditional justice, as Sowell explains, is about, “impartial processes rather than either results or prospects.” Sowell gives the example of a law court. A trial is just if handled in accordance with the law and with an impartial judge and jury, no matter the verdict. A baseball game is fair if it was called according to the rules of the game, no matter which side won.

Sowell opposes the idea of cosmic justice, not because he relishes poor people being poor, or the oppressed being oppressed, but because he knows that every time the government has tried to change the rules to benefit a class that is seen as disadvantaged, the changing of the rules actually does more harm than good. He writes:

We must begin with the universe that we were born into and weigh the costs of making any specific change in it to achieve a specific end. We cannot simply ‘do something’ whenever we are morally indignant, while disdaining to consider the costs entailed.

Immigrants were living in slums that, to wealthier Americans, did not meet acceptable standards of living. Three to four people were packed into a room, the apartments were poorly ventilated, and tenants often had to go to the bathroom outside if they didn’t share a common hall bathroom. Appalled, reformers set standards for how apartments could be built, how many people could live in a specific amount of space, and other features meant to raise the standard of living.

This inevitably raised the cost of the apartments, which many tenants were still able to afford. The reason they were living in apartments far below what they could afford was that they were saving up to send money back to their families who were starving in their homelands and to prepare a better future for themselves and their children.

While it seemed too much wealthier observers that they were “helping” these poor immigrants by creating new laws and mandates to raise their living standards, what they really did was take away their freedom to make choices and tradeoffs, and stunt their rise out of poverty.

What those seeking cosmic justice are really trying to do, Sowell says, is, “to eliminate undeserved disadvantages for selected groups.” This can be done by changing the rules to the “benefit” of the disadvantaged and to the detriment of the privileged. As Sowell argues, these benefits rarely benefit anyone. But even if this were not the case, how is man to decide who are the advantaged and the disadvantaged?

The fad in the social justice world now is to hold up race (and to a lesser extent gender) as the primary factor that causes inequality. But Sowell argues that this is a huge oversimplification.

Cosmic justice is not about the rules of the game. It is about putting particular segments of society in the position they would have been but for some undeserved misfortune. This concept of fairness requires that third parties must wield the power to control outcomes, over-riding rules, standards or the preferences of people.

The answer is that you can’t.

This is the fundamental difference between those who seek cosmic justice and those who follow traditional justice. Traditional justice assumes the fact that man is limited—in ability, information, energy, goodness, and so on—and is, therefore, unable to judge what is perfectly just in every case on his own.

Even if man were able to judge what is just outside of a set of rules, and even if these interventions did not cause even worse problems than the ones they were trying to fix, even if all the people making the judgments are perfectly able to do so, that power is bound to be exploited by those with selfish intentions.

“A society that puts equality—in the sense of equality of outcome—ahead of freedom will end up with neither equality nor freedom,” Sowell writes, quoting Milton Friedman. “The use of force to achieve equality will destroy freedom, and the force, introduced for good purposes will end up in the hands of people who use it to promote their own interests.”

The traditional justice system is not what gets in the way of real justice being done; it is our only hope in keeping us from making the same mistakes as Germany, Russia, Cuba, etc. The individuals in these countries did not sign up for mass murder or for starvation and imprisonment. They signed up for the supposedly benevolent government to bypass the rules to achieve something good. But once bypassed, those rules are gone, and the leash that holds back evil men from exploiting the good is snapped.

Sowell recognizes that we must begin with the world we are born into, not the idealistic world we want to create.

In the cosmic world, there are no tradeoffs. We can hand everyone $2000 without any negative outcome on the value of our currency. We can raise the minimum wage to $15 without negative outcomes on employment. We can use force to make a better world.

In the end, cosmic justice operates on unrealistic assumptions. In the real world, tradeoffs exist, and man cannot attempt to fashion the world as he chooses without consequences. In this world, noble ends are not enough, and the means we use matter more than our intentions.