Sign of inequality: US salaries recover even as jobs haven’t 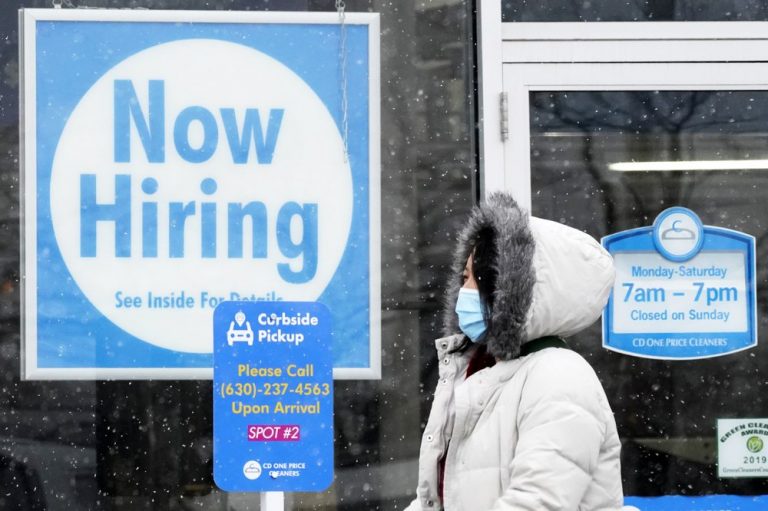 In a stark sign of the economic inequality that has marked the pandemic recession and recovery, Americans as a whole are now earning the same amount in wages and salaries that they did before the virus struck — even with nearly 9 million fewer people working.

The turnaround in total wages underscores how disproportionately America’s job losses have afflicted workers in lower-income occupations rather than in higher-paying industries, where employees have actually gained jobs as well as income since early last year.

In February 2020, Americans earned $9.66 trillion in wages and salaries, at a seasonally adjusted annual rate, according to the Commerce Department data. By April, after the virus had flattened the U.S. economy, that figure had shrunk by 10%. It then gradually recovered before reaching $9.67 trillion in December, the latest period for which data is available.

Those dollar figures include only wages and salaries that people earned from jobs. They don’t include money that tens of millions of Americans have received from unemployment benefits or the Social Security and other aid that goes to many other households. The figures also don’t include investment income.

A separate measure tracked by the Labor Department shows the same result: Total labor income, excluding government workers, was 0.6% higher in January than it was a year earlier.

That is “pretty remarkable,” given the sharp drop in employment, said Michael Feroli, an economist at JPMorgan Chase.

The job cuts resulting from the pandemic recession have fallen heavily on lower-income workers across the service sector — from restaurants and hotels to retail stores and entertainment venues. By contrast, tens of millions of higher-income Americans, especially those able to work from home, have managed to keep or acquire jobs and continue to receive pay increases.

“We’ve never seen anything like that before,” said Richard Deitz, a senior economist at the Federal Reserve Bank of New York, referring to the concentration of job losses. “It’s a totally different kind of downturn than we’ve experienced in modern times.”

Of the nearly 10 million jobs that have been eliminated by the pandemic, 40% have been in restaurants, bars, hotels, arts, and entertainment. Retailers have lost nearly 400,000 jobs and many low-paying health care workers, such as nursing home attendants and home health care aides, have also been laid off.

On average, restaurant workers make just below $13 an hour, according to Labor Department data. Retail cashier pay is about the same. That’s less than half the economy-wide average of nearly $30 an hour.

“It tells the story of an economy that has really tanked for the most vulnerable,” said Elise Gould, an economist at the liberal Economic Policy Institute. “It’s shocking how small a dent that has made in the aggregate.”

The figures also underscore the unusually accelerated nature of this recession. As a whole, both the job losses that struck early last spring and the initial rebound in hiring that followed have happened much faster than they did in previous recessions and recoveries. After the Great Recession, for example, it took nearly 2 1/2 years for wages and salaries to regain their pre-recession levels.

“This is one of the worst recessions we’ve ever had — compressed into one-tenth of the time that a normal recession would take,” said Ernie Tedeschi, policy economist at the investment bank Evercore ISI. “Hopefully, the recovery will continue to be compressed as well. That’s where the fears are and where the debate is.” 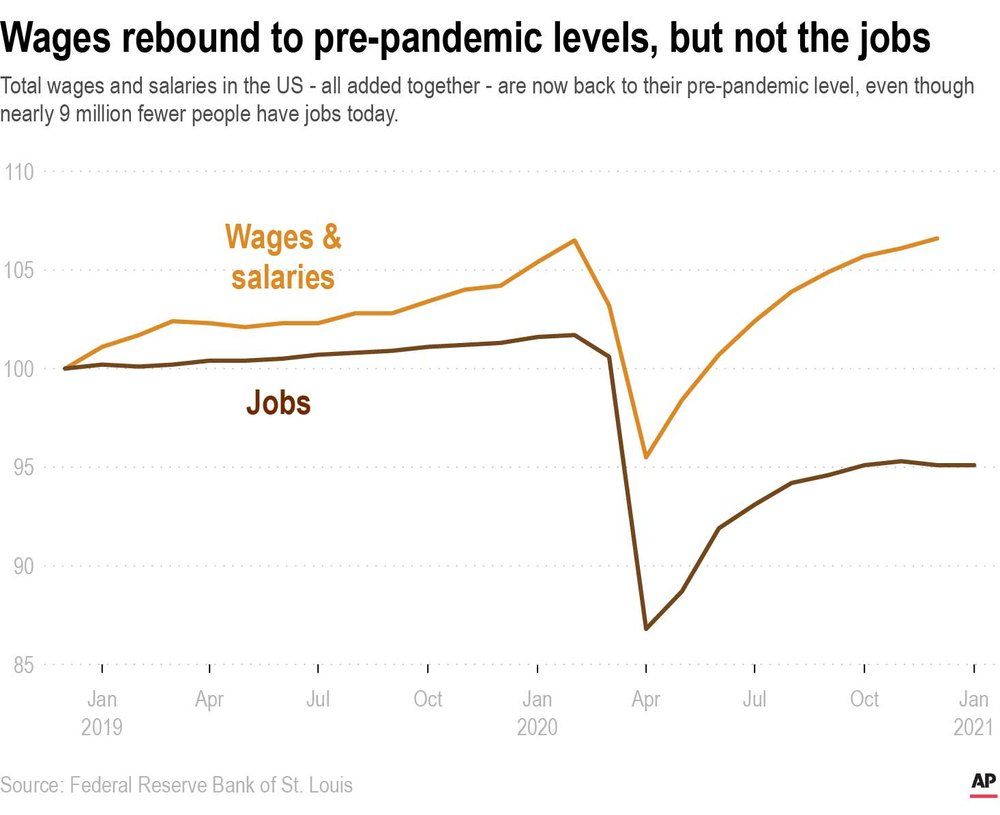 One reason why the job losses have had relatively little impact on the nation’s total pay is that so many of the affected employees worked part time. The average work week in the industry that includes hotels, restaurants and bars is just below 26 hours. That’s the shortest such figure among 13 major industries tracked by the government. The next shortest is retail, at about 31 hours. The average for all industries is nearly 35 hours.

The recovery in wages and salaries helps explain why some states haven’t suffered as sharp a drop in tax revenue as many had feared. That is especially true for states that rely on progressive taxes that fall more heavily on the rich. California, for example, said last month that it has a $15 billion budget surplus. Yet many cities are still struggling, and local transit agencies, such as New York City’s subway, have been hammered by the pandemic.

The wage and salary data also helps explain the steady gains in the stock market, which have been led by high-tech companies whose products are being heavily purchased and used by higher-income Americans, such as Apple iPads, Peloton bikes, or Amazon’s online shopping.

By contrast, job losses were much more widespread in the Great Recession of 2008-2009. Relatively higher-paying blue collar jobs in manufacturing and construction were hit worst: Construction lost 20% of its jobs, manufacturing 15%. Even a decade later, neither sector had fully recovered those jobs by the time the pandemic hit. Financial services lost 6% of its jobs in the previous recession, compared with 1% this time.

Some companies have cut wages in this recession, but on the whole the many millions of Americans fortunate enough to keep their jobs have generally received pay raises at largely pre-recession rates. Some of those income gains likely reflect cost-of-living raises; the Commerce Department’s wage and salary data isn’t adjusted for inflation.

Tedeschi calculates that the typical — or median — hourly pay for employed workers has risen about 3.5% in the past year, roughly the same pace as before the pandemic. That’s a sign of what some economists refer to as the “sticky wages” concept: Some employers prefer to lay off workers while leaving pay largely unchanged for their remaining employees.

Truman Bewley, a retired Yale University economist who wrote a book about the concept of sticky wages, said that most companies have a key core of workers they rely on through hard times and are reluctant to cut pay for them.

And there’s another reason, Bewley said, why many companies cut jobs instead of pay. While researching his book, he said a factory manager told him why his company did so: “It gets the misery out the door.”