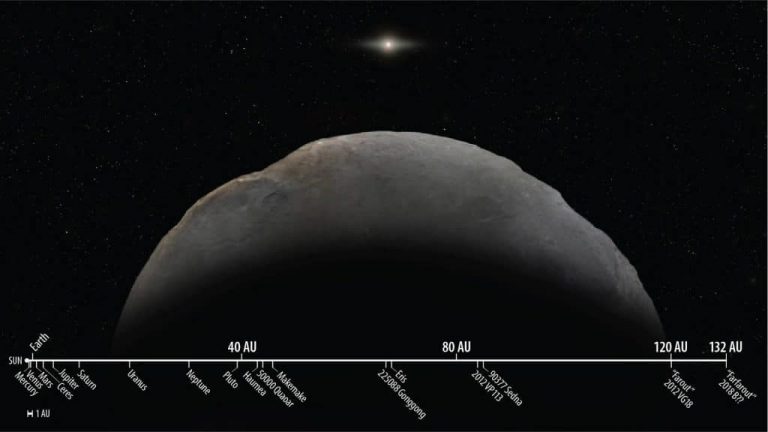 A team of astronomers, including associate professor Chad Trujillo of Northern Arizona University’s Department of Astronomy and Planetary Science, have confirmed a planetoid that is almost four times farther from the Sun than Pluto, making it the most distant object observed in our solar system. The planetoid, which has been nicknamed “Farfarout,” was first detected in 2018, and the team has now collected enough observations to pin down its orbit. The Minor Planet Center has now given it the official designation of 2018 AG37.

Farfarout’s nickname distinguished it from the previous record holder “Farout,” found by the same team of astronomers in 2018. In addition to Trujillo, the discovery team includes Scott S. Sheppard of the Carnegie Institution for Science and David Tholen from the University of Hawaiʻi Institute for Astronomy, who have an ongoing survey to map the outer solar system beyond Pluto.

Farfarout will be given an official name (like Sedna and other similar objects) after its orbit is better determined over the next few years. It was discovered at the Subaru 8-meter telescope located atop Maunakea in Hawaiʻi, and recovered using the Gemini North and Magellan telescopes in the past few years to determine its orbit based on its slow motion across the sky.

Farfarout’s average distance from the Sun is 132 astronomical units (au); one au is the distance between the Earth and Sun. For comparison, Pluto is 39 au from the Sun. The newly discovered object has an elongated orbit that takes it out to 175 au at its most distant, and inside the orbit of Neptune, to around 27 au, when it is close to the Sun.

Farfarout’s journey around the Sun takes about a thousand years, crossing the massive planet Neptune’s orbit every time. This means Farfarout has likely experienced strong gravitational interactions with Neptune over the age of the solar system, and is the reason why it has such a large and elongated orbit.

“A single orbit of Farfarout around the Sun takes a millennium,” Tholen said. “Because of this long orbital, it moves very slowly across the sky, requiring several years of observations to precisely determine its trajectory.”

Farfarout is very faint, and based on its brightness and distance from the Sun, the team estimates its size to be about 400 kilometers across, putting it on the low end of being a dwarf planet, assuming it is an ice rich object.

“The discovery of Farfarout shows our increasing ability to map the outer solar system and observe farther and farther toward the fringes of our solar system,” Sheppard said. “Only with the advancements in the last few years of large digital cameras on very large telescopes has it been possible to efficiently discover very distant objects like Farfarout. Even though some of these distant objects are quite large, being dwarf planet in size, they are very faint because of their extreme distances from the Sun. Farfarout is just the tip of the iceberg of solar system objects in the very distant solar system.”

Because Neptune strongly interacts with Farfarout, Farfarout’s orbit and movement cannot be used to determine if there is another unknown massive planet in the very distant solar system, since these interactions dominate Farfarout’s orbital dynamics. Only those objects whose orbits stay in the very distant solar system, well beyond Neptune’s gravitational influence, can be used to probe for signs of an unknown massive planet. These include Sedna and 2012 VP113, which, although they are currently closer to the Sun than Farfarout (at around 80 au), they never approach Neptune and thus would be strongly influenced by the possible Planet X instead.

“Farfarout’s orbital dynamics can help us understand how Neptune formed and evolved, as Farfarout was likely thrown into the outer solar system by getting too close to Neptune in the distant past,” Trujillo said. “Farfarout will likely strongly interact with Neptune again since their orbits continue to intersect.”

Kerry Bennett | Office of the Vice President for Research, NAU

PrevPreviousOpinion: If We Play Our Cards Right, the Economy is Teed-Up for a Boom
NextPrescott High School Sports Roundup: Badgers Bite Cobras Early in 61-48 WinNext