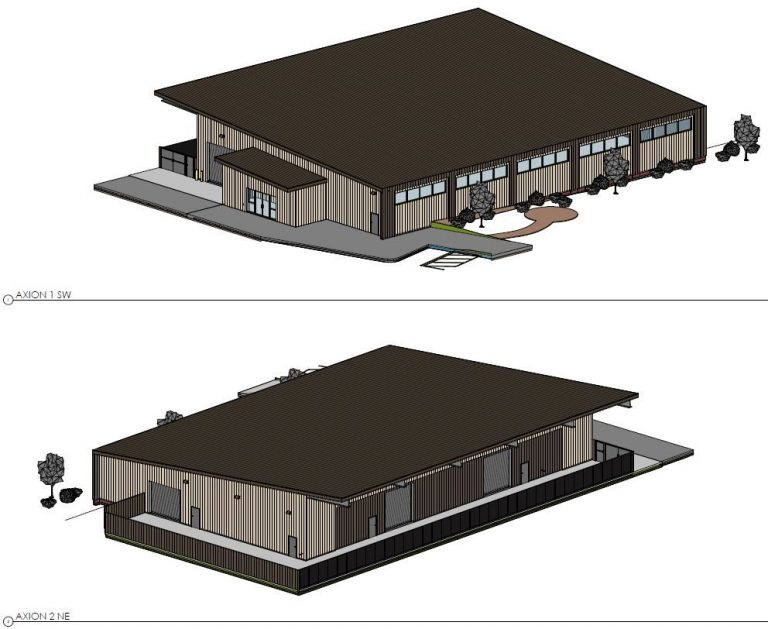 Ground has been broken in Clarkdale for Yavapai College’s new Skilled Trades Center, a ten-thousand-square-foot facility that will train the coming generation of construction workers, electricians, plumbers and heating/cooling technicians on the Verde Valley Campus.

“It’s a pre-engineered building and it will arrive in early March,” YC Director of Facilities David Laurence explained. “We’ll pour the [foundation] pad in February, and the building will be up in late March or early April. The plan is to have everything in place around June 30, then put in the security and IT systems.”

Designed by SPS+ architects – the team behind the Verde Campus’s recently completed Building L renovation – and constructed by McCarthy Building Systems, the Skilled Trades Center will serve as the campus’s new Building D. It will house the classrooms, shop space and equipment to teach trades critical to the Verde Valley’s continuing growth.

“The interior will consist of four large bays, each equipped to handle a different program,” YC Career & Technical Programs Dean John Morgan explained. The exterior will include large covered spaces, for outdoor work. “It will be similar to CTEC [The College’s Technical Campus near the Prescott airport] in that everything will be open and visible. Faculty offices will be adjacent to each lab, with views extending into the labs.”

The building’s design is the product of extended consultation between the College and the Verde Valley community. “After several months of meetings, a group consisting of local businesses, school superintendents, and county officials voted on the programs they felt made the most sense to add in the Verde, based on workforce needs.” Morgan said. “Those programs included engineering and manufacturing – now located in building L – and residential electrician, plumbing, HVAC and construction programs, slated to go into the new center.”

The new center fulfills a promise, made by Yavapai College President Dr. Lisa Rhine back in 2019. “I’ve heard your requests for skilled trades programming in the Verde Valley,” she said. “Yavapai College is here and we are ready to provide the educational opportunities and infuse the workforce on the East side of Yavapai County.”

Consultation with Verde Valley residents began that summer. Designs were completed and site preparation commenced in December, and YC’s Verde Valley Skilled Trades Center is scheduled to open its doors to students in the fall of 2021.