Analysis: A race war evident long before the Capitol siege 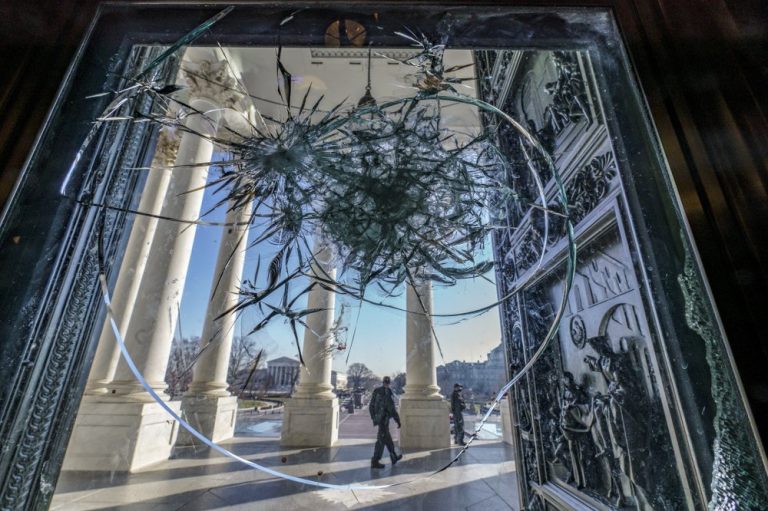 A war rages on in America, and it didn’t begin with Donald Trump or the assault on the Capitol.

It started with slavery and never ended, through lynchings and voter suppression, the snarling attack dogs of Bull Connor and the insidious accounting of redlining.

Today’s battles in the race war are waged by legions of white people in the thrall of stereotypes, lies and conspiracy theories that don’t just exist for recluses on some dark corner of the internet.

People like the murderer who fatally shot nine Black parishioners at a church in South Carolina, telling detectives that Black people were taking over the country and raping white women. And the shooter who killed 23 and wounded 23 others at a Walmart in El Paso, Texas — targeting Mexicans, authorities say, because he believed they were invading the country to vote for Democrats.

And the riotous mob, rife with white supremacists, that bought in when Trump and others insisted falsely that the presidential election was stolen, mostly in areas where people of color live and vote. 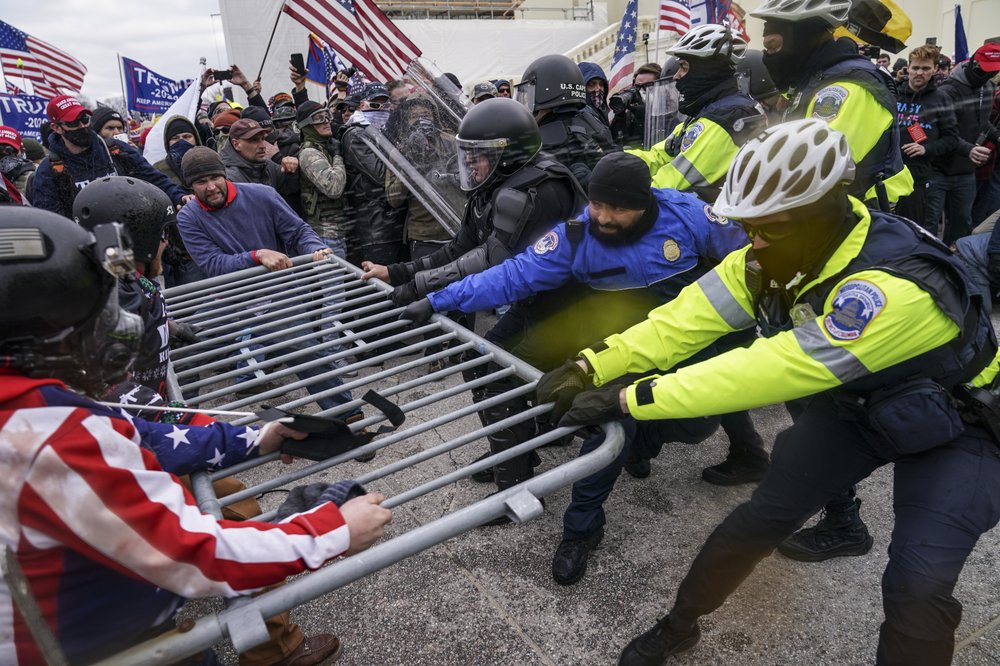 Trump supporters try to break through a police barrier at the Capitol in Washington. (AP Photo/Julio Cortez)

For a very long time, civil rights leaders, historians and experts on extremism say, many white Americans and elected leaders have failed to acknowledge that this war of white aggression was real, even as the bodies of innocent people piled up.

Racist notions about people of color, immigrants and politicians have been given mainstream media platforms, are represented in statues and symbols to slaveholders and segregationists, and helped demagogues win elections to high office.

The result? A critical mass of white people fears that multiculturalism, progressive politics and the equitable distribution of power spell their obsolescence, erasure and subjugation. And that fear, often exploited by those in power, has proven again and again to be among the most lethal threats to nonwhite Americans, according to racial justice advocates.

So how does the nation begin addressing the war of white aggression after countless missed opportunities?

The Rev. William Barber II, a civil rights leader and co-chair of the Poor People’s Campaign, a multiracial coalition that aims to lift millions out of poverty and oppression, said it starts with collectively refusing to have political debates rooted in lies and racist tropes.

“White supremacy, though it may be targeted at Black people, is ultimately against democracy itself,” Barber told The Associated Press. “The collateral damage, when you keep unleashing the lies, sow the wind and pour this poison into the veins of people, is the system becomes so septic that violence spews out of it.”

After taking the oath of office on the very platform that some in the mob scaled to breach the Capitol, President Joe Biden acknowledged the danger of doing nothing about systemic racism and violence born of hate.

“A cry for racial justice some 400 years in the making moves us,” he said. “A cry that can’t be any more desperate or any more clear. And now a rise of political extremism, white supremacy, domestic terrorism that we must confront and we will defeat.”

Historically, white supremacy has advanced in lockstep with fears of Black political power. After the Civil War, when formerly enslaved people got the right to vote and hold office, the white response included Jim Crow segregation, voter suppression and oppression through law enforcement.

The Jan. 6 Capitol riot occurred the same day that Georgia declared the winners of its runoff elections — Democrats Raphael Warnock and Jon Ossoff, the first Black and Jewish candidates the Southern state had ever sent to the U.S. Senate. And it happened as Inauguration Day approached for Kamala Harris, the first Black and South Asian person sworn to serve as vice president.

It should not go unnoted that at least one large Confederate flag was waved by the Capitol trespassers.

To many in that mostly white mob, nonwhite Americans wielded an inconceivable amount of political influence in the last election, threatening the primacy of white rule. When white supremacism is challenged, its defenders deliberately sow division in service to the old order, Barber said.

“This kind of mob violence, in reaction to Black, brown and white people coming together and voting to move the nation forward in progressive ways, has always been the backlash,” he said. 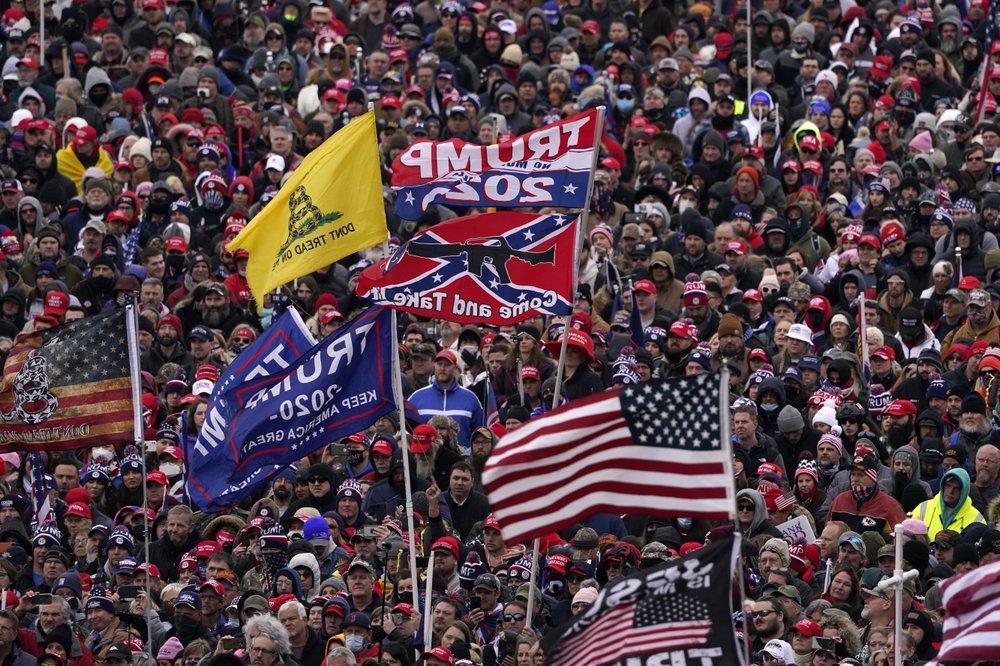 Supporters listen to President Donald Trump speak as flags, including a Confederate-themed one, flutter in the wind during a rally in Washington. (AP Photo/Evan Vucci)

“All somebody had to do was actually look at the dead bodies and the killers to realize that the threat of domestic white supremacist violence has been with us for quite a while,” Segal said.

According to the ADL, which tracks hate violence, roughly 74% of extremists who committed homicides in the U.S. between 2010 and 2019 were right-wing extremists, and a majority of those were white supremacists.

On Monday, the Southern Poverty Law Center, which has tracked racism, xenophobia and zealotry since 1990, said the number of active hate groups decreased last year by 11%. The decrease is due, in part, to a splintering of white supremacist and neo-Nazi groups and a migration to social media platforms and their use of encrypted apps. Still, the law center said, the level of hatred and bigotry in America, as well as the threat of domestic terrorism by hate groups, has not diminished.

Christian Picciolini, a former far-right extremist who founded the deradicalization group Free Radicals Project, said it has become easy to otherize and ignore white people who support far-right movements or join hate groups. But for too long, he said, that has been part of a collective denial among white people that a real-world, violent threat exists.

“We have to understand that, if we want to prevent this in the future, we have to examine our history — 400 years of what I would classify as our nation’s potholes,” said Picciolini, who last year released the anti-extremist book “Breaking Hate.” 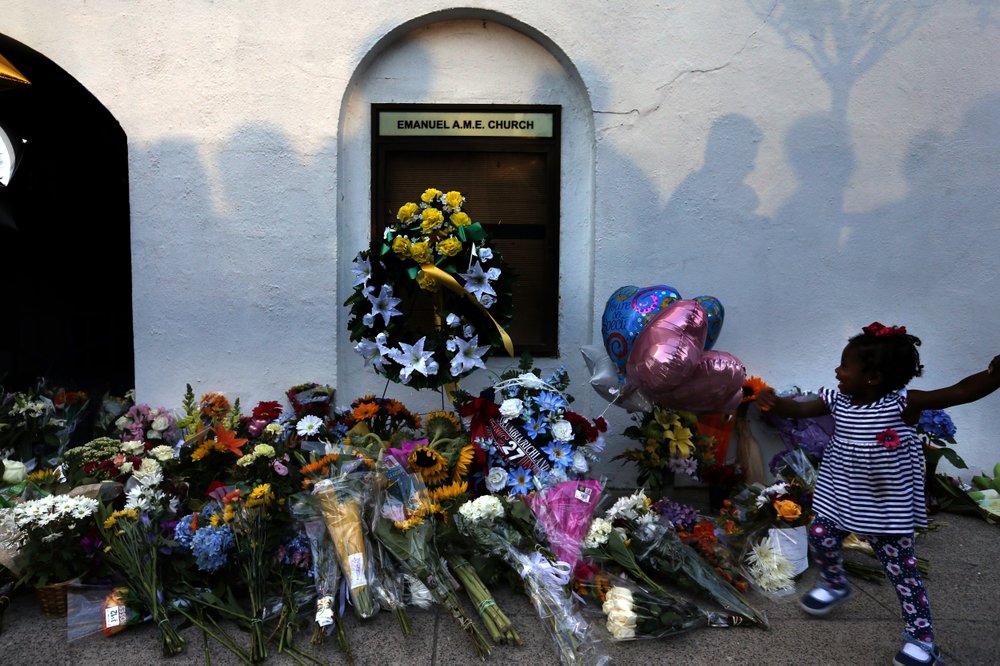 Mourners pass by a makeshift memorial on the sidewalk in front of the Mother Emanuel AME Church following the shooting of nine Black parishioners in Charleston, S.C. (AP Photo/Stephen B. Morton)

Malcolm Graham, a former state senator in North Carolina, firmly believes that America’s failure to confront white supremacism cost the life of his older sister, Cynthia Graham-Hurd. She was among the nine killed in 2015 during a Bible study meeting at Mother Emanuel African Methodist Episcopal Church in Charleston.

The massacre “was a defining moment,” Graham said. But that moment was wasted when officials and media overemphasized that the victims’ families forgave the killer, instead of investigating his path to extremism, he said.

“We never really dealt with what occurred in Charleston, because everybody was so quick to want to clean it up,” said Graham, who now serves on the Charlotte City Council.

Cynthia Graham-Hurd, a beloved public librarian who was just shy of her 55th birthday, died huddled under a desk in the church’s fellowship hall. She had been shot at least a half-dozen times.

The gunman, Dylann Roof, committed the nation’s deadliest act of anti-Black domestic terrorism since the 1963 Ku Klux Klan bombing that killed four girls at a Black church in Alabama. During closing arguments at Roof’s trial, a federal prosecutor said the 22-year-old avowed white supremacist intended to start a war between the races.

His actions instead sparked a national reckoning over white supremacist iconography, including the Confederate battle flag, monuments and statues that appeared in photographs and drawings investigators found among Roof’s belongings. 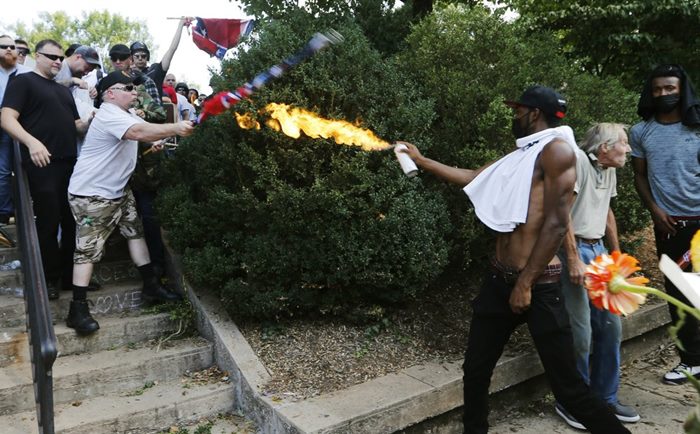 A counter demonstrator uses a lighted spray can against a white nationalist demonstrator at the entrance to Lee Park in Charlottesville, Va. (AP Photo/Steve Helber) 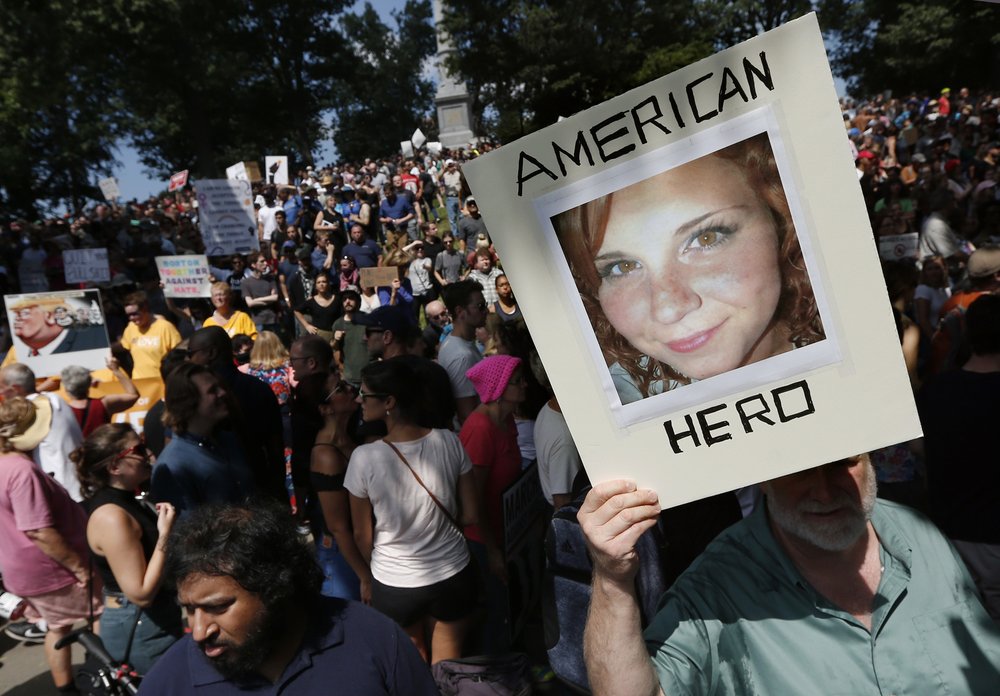 A protester holds a photo of Heather Heyer on Boston Common at a “Free Speech” rally organized by conservative activists in Boston. Heyer was killed when a car, driven by James Alex Fields Jr., plowed into a group of people during protests in Charlottesville, Va. (AP Photo/Michael Dwyer)

In July 2015, former Republican Gov. Nikki Haley, who is Indian American, signed legislation permanently lowering the Confederate battle flag that flew over South Carolina’s Capitol. Many saw it as a sign that white Americans were awakening to their complicity and accepted their obligation to address disproportionate white control of government, economy and media.

Two years after the Charleston massacre, in 2017, white supremacists, the Proud Boys and neo-Nazis held a so-called “Unite the Right″ rally in Charlottesville, Virginia. The event was staged in opposition to the proposed removal of a Confederate monument from a public park. Heather Heyer, a white counter protester, died in an attack carried out by a rallygoer.

Trump — who, just one day before Roof carried out his murders, launched his White House bid by decrying Mexican migrants as rapists and drug dealers — infamously said there were “fine people” among the racist Charlottesville rally participants.

There have been moments when it seemed like a reckoning with racism was at hand. After the May 25 police killing of George Floyd in Minneapolis, white people joined protests across the nation.

The SPLC said 111 Confederate monuments and other white supremacist symbols have been removed, relocated or renamed since Floyd’s death. But nearly 1,800 Confederate symbols, including 725 monuments, remained on public land as of December.

“Confederate symbols are not relics of the past – they are living symbols of white supremacy,” SPLC chief of staff Lecia Brooks said.

“As evidenced by the events of Jan. 6, the Confederate flag is just one of many tools still used to reassert white supremacist ideals,” she told the AP. “These symbols did not go up overnight and the power they hold — specifically in the South — will not be overcome if we continue to stay silent.”

The SPLC has called for federal law enforcement agencies to devote more resources to tracking and prosecuting hate violence and bias incidents, as well as enacting legislation that shifts funding away from punishment models and toward preventing violent extremism. Picciolini, the former extremist, said prevention is essential to deradicalizing people who pose domestic terror threats.

“The way that I work with people to disengage them from extremism is to not really debate them ideologically,” he said. “I think that’s the same way America has to deal with this problem. We have to look back at our historical potholes and finally accept them and address them, (and) embrace the people who’ve been harmed along the way, to help shape our future together.” 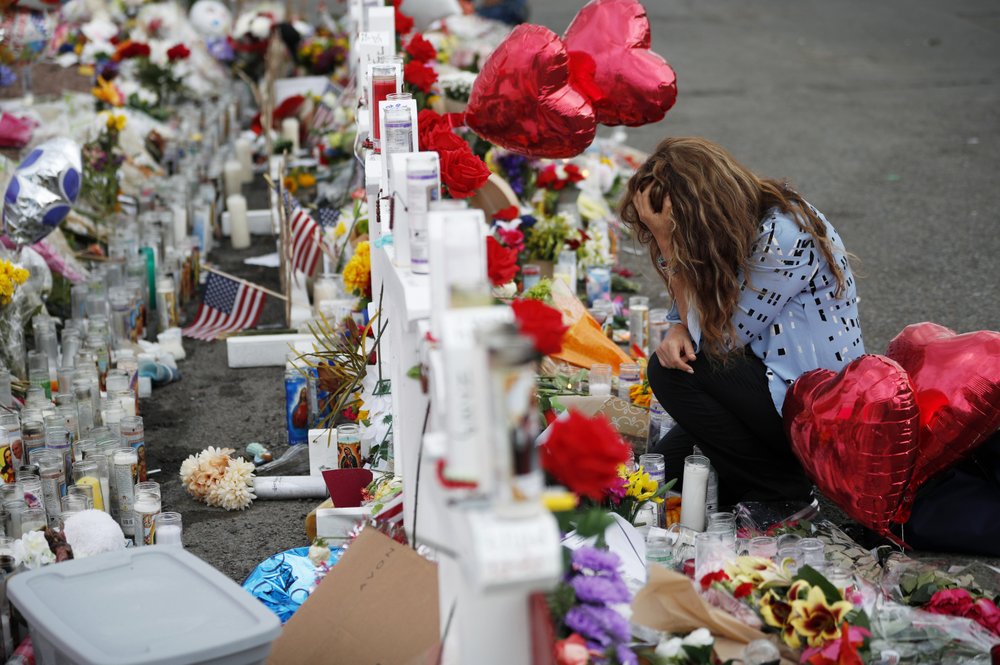 Gloria Garces kneels in front of crosses at a makeshift memorial near the scene of a mass shooting at a shopping complex in El Paso, Texas. (AP Photo/John Locher)

For Graham, who lost his sister in the Mother Emanuel shooting, the onus isn’t on Black people to begin negotiating a truce in the race war. Accountability must come first, he said.

“I think white folks need to have a town hall meeting, and I think they need to start calling their people out,” Graham said. “They have to be able to point a finger at folks that look like them, and point them out at their dinner table, at their churches, at their places of employment.”

Those town halls can be spaces for healing between the races, said La June Montgomery Tabron, president and CEO of the W.K. Kellogg Foundation, a philanthropic organization.

“At the root of healing is truth-telling,” said Tabron, whose organization has hosted a national day of racial healing for several years. “What we know in our work is that, for children to thrive in the future, they need a country, a nation and a world where there is equity.”

Aaron Morrison began covering race and justice for The Associated Press in 2020. He is a member of the AP’s Race and Ethnicity team. Follow him on Twitter: https://www.twitter.com/aaronlmorrison.