Why Biden’s immigration plan may be risky for Democrats 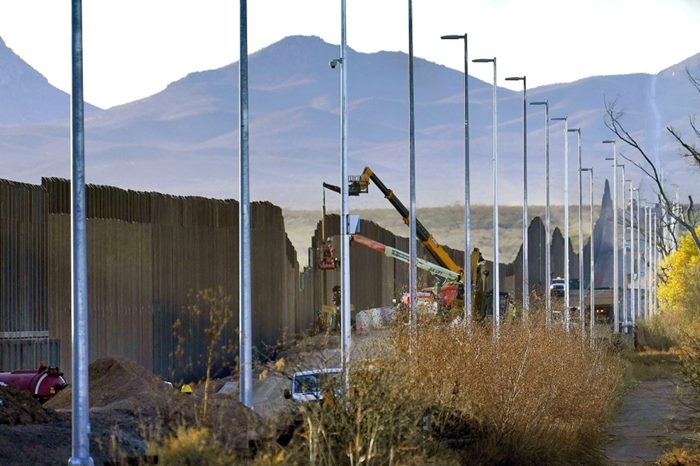 President Joe Biden is confronting the political risk that comes with grand ambition.

As one of his first acts, Biden offered a sweeping immigration overhaul last week that would provide a path to U.S. citizenship for the estimated 11 million people who are in the United States illegally. It would also codify provisions wiping out some of President Donald Trump’s signature hard-line policies, including trying to end existing, protected legal status for many immigrants brought to the U.S. as children and crackdowns on asylum rules.

It’s precisely the type of measure that many Latino activists have longed for, particularly after the tough approach of the Trump era. But it must compete with Biden’s other marquee legislative goals, including a $1.9 trillion plan to combat the coronavirus, an infrastructure package that promotes green energy initiatives and a “public option” to expand health insurance.

In the best of circumstances, enacting such a broad range of legislation would be difficult. But in a narrowly divided Congress, it could be impossible. And that has Latinos, the nation’s fastest growing voting bloc, worried that Biden and congressional leaders could cut deals that weaken the finished product too much — or fail to pass anything at all.

“This cannot be a situation where simply a visionary bill — a message bill — gets sent to Congress and nothing happens with it,” said Marielena Hincapié, executive director of the National Immigration Law Center, which advocates for low-income immigrants. “There’s an expectation that they will deliver and that there is a mandate now for Biden to be unapologetically pro-immigrant and have a political imperative to do so, and the Democrats do as well.”

If Latinos ultimately feel betrayed, the political consequences for Democrats could be long-lasting. The 2020 election provided several warning signs that, despite Democratic efforts to build a multiracial coalition, Latino support could be at risk.

Biden already was viewed skeptically by some Latino activists for his association with former President Barack Obama, who was called the “deporter in chief” for the record number of immigrants who were removed from the country during his administration. Sen. Bernie Sanders of Vermont defeated Biden in last year’s Nevada caucuses and California primary, which served as early barometers of the Latino vote.

In his race against Trump, Biden won the support of 63% of Latino voters compared with Trump’s 35%, according to AP VoteCast, a survey of more than 110,000 voters nationwide. But Trump narrowed the margin somewhat in some swing states such as Nevada and also got a bump from Latino men, 39% of whom backed him compared with 33% of Latino women.

Biden became the first Democratic presidential candidate since 1996 to carry Arizona, in part because of strong grassroots backing from Mexican American groups opposed to strict GOP immigration policies going back decades. But he lost Florida by underperforming in its largest Hispanic county, Miami-Dade, where the Trump campaign’s anti-socialism message resonated with Cuban- and some Venezuelan Americans.

There were more warning signs for House Democrats, who lost four California seats and two in South Florida while failing to pick up any in Texas. Booming Hispanic populations reflected in new U.S. census figures may see Texas and Florida gain congressional districts before 2022′s midterm elections, which could make correcting the problem all the more pressing for Democrats.

The urgency isn’t lost on Biden. He privately spent months telling immigration advocates that major overhauls would be at the top of his to-do list. As vice president, he watched while the Obama administration used larger congressional majorities to speed passage of a financial crisis stimulus bill and its signature health care law while letting an immigration overhaul languish.

“It means so much to us to have a new president propose bold, visionary immigration reform on Day 1. Not Day 2. Not Day 3. Not a year later,” said New Jersey Democratic Sen. Bob Menendez, his chamber’s lead sponsor of the Biden package.

Menendez was part of a bipartisan immigration plan championed by the “Gang of Eight” senators that collapsed in 2013. Obama then resorted to executive action to offer legal status to millions of young immigrants. President George W. Bush also pushed an immigration package — with an eye toward boosting Latino support for Republicans before the 2008 election — only to see it fail in Congress.

Menendez acknowledged that the latest bill will have to find at least 10 Republican senators’ support to clear the 60-vote hurdle to reach the floor, and that he’s “under no illusions” how difficult that will be.

Former Rep. Carlos Curbelo, a moderate Republican from Florida, said Biden may find some GOP support but probably will have to settle for far less than what’s in his original proposal.

“Many Republicans are worried about primary challenges,” Curbelo said, adding that Trump and his supporters’ championing of immigration crackdowns means there’s “political peril there for Republicans.”

But he also said Democrats could alienate some of their own base by appearing to prioritize the needs of people in the country illegally over those of struggling U.S. citizens and thus “appearing to overreach from the perspective of swing and independent voters.”

Indeed, Democrats haven’t always universally lined up behind an immigration overhaul, arguing that it could lead to an influx of cheap labor that hurts U.S. workers. Some of the party’s senators joined Republicans in sinking Bush’s bill.

Chuck Roca, head of Nuestro PAC, which spent $4 million on ads boosting Biden in Arizona, said that while Hispanics have traditionally tended to support Democrats, he has begun to see trends in the past decade where more are registering as independent or without party affiliation. Those voters can still be won back, he said, but only if Latinos see real change on major issues such as immigration “even if it’s piecemeal.”

“They have to get something done if they want to start to turn around the loss of Latino voters,” said Rocha, who headed Latino voter outreach for Sanders’ presidential campaign. “They have to do everything in their power now to get Latinos back.”